Things change. More often than not, when things change, it is usually for the worse.

In the case of my photo shoot of the Sawtooth Wilderness, the change in plan, might turn out to be a good thing.

The original plan is for a photo shoot that is a repeat of the 21 Lakes Tour of the Sawtooth Wilderness. I want a repeat of the four day off-trail effort in 2018 because forest fires in the vicinity had a material impact (to the negative) with the images captured.

Planned six-months in advance, the prospect of success and fun for this version of the shoot look great.  The biggest positive? No forest fires.  However, things change.

First, I decide to change the lineup of photographic equipment to be utilized.  I add the new Nikon Z Mirrorless equipment for the trip. This provides the ability to photograph action wildlife and Astro-photography in addition to landscape.

Second, the shoot goes from a multiple person gig, to a solo effort.

After some careful thought, and with full support from my wife Linda, I decide to go ahead with the shoot as revised. I will and try to cover the same ground solo.  This means I will be carrying 70lbs on my back.  The weight includes a camera and multiple lens for three different systems.  It includes a tripod with a substantial Gimble Head.  I do not cut corners on camping gear, or food allocation.

While I know the changes will put a good deal of pressure on me, I am comfortable giving the plan a try.  Why?  I have been hiking and photographing in tough terrain on a regular basis with little pause for the past 12 months.  Many of these shoots have me carrying 55 lbs.+ off trail in terrain as challenging as I will experience on this shoot. Also, if the conditions or situation appear to be deteriorating to unacceptable levels, I will back off and adjust accordingly.

The shoot starts with a 7 mile water taxi trip on a pontoon boat across Redfish Lake to the Trailhead at Redfish Creek Inlet.  Normally, I cover the water portion with my own boat, but Linda suggests taking the water taxi to avoid complication. Linda provides an incentive – money for the round-trip and a 16 ounce mug of draft beer upon my return.

The goal is met.  However the climb out of the valley floor and last steep sections to Alpine Lake are executed with the sun high overhead and temperatures approaching 90 degrees. Ninety degree heat and sun exposure at sea-level is materially less challenging than at 8,000 feet in elevation. No fun!

Given the prospects of higher than normal temperatures and 15lbs. of additional weight in my pack, I choose to slow my pace and pay close attention to my level of hydration.  There is water on the entire route.  I refill my two 21 ounce water bottles with surprising frequency.  I sterilize the water with a steri-pen device.

At the start of the Alpine Lake Baron Divide section of the trip, I happen upon Dave and Melissa Pinney.  Both are performing maintenance on the trail.  They are members of the Pulaski Users Group (PUG).  PUG is a volunteer organization that plays a key role in maintaining trails in Central Idaho. PUG is an impressive group of people with a remarkable approach and philosophy as it relates to the back-country and trails.  More information about PUG is [here].

Similar to Linda and myself, Dave and Melissa have chosen to make the Stanley area their home.  Dave says there is no snow at Alpine Lake, but says it had about 6 feet of the white stuff a month ago.  Talk about fast dissipation.

I reach Alpine Lake in the late afternoon as planned.  However, I utilized more energy to complete the section than I expected. I make camp and take a swim in Alpine Lake.  The water is really cold. However, it is refreshing and cuts down on the effects of the wear and tear of the days trip on my body.

After dinner, I decide to evaluate the implication of the high temperatures, and extra weight from the added photographic gear.  Do I, and or, can I complete the trip as planned?  I have the option to add another day or even two as I have the food reserves. However, there are two spots on the trip ahead – the ascent and descent at Warbonnet Pass and the ascent of Reward Peak – that are rather nasty. Both are steep scree like sections composed of dissolved granite at 10,000 feet elevation.  In 2018 the last 200 vertical up to Reward Saddle was similar to walking on sandpaper at a 40+ degree.  The conditions were so sketchy, Chris & Sara Lundy, and I were forced to rope up and travel one foot in front of the other to the saddle.

I determine I will think overnight about a possible change in plan.  I do not let the dilemma interfere with my shooting schedule.  The plan is to photograph the night sky with the Sawtooths and the peaks of Old Monte Verita and Monte Verita and Alpine Lake in the foreground.

I begin the shoot at 2:15 AM.  I capture images for about 75 minutes.  Because I am a Manual Settings Photographer (MSP), my plan is to work through all combinations of Focus, ISO, F-Stop and Shutter Speed settings on the camera I believe make sense. I hope the result yields a photograph that represents what I am seeing before me.

Did I mention my cursing of the decision to add the [sic., weight of the] Nikon Z Camera, Z lenses, Extra-Extra sturdy Tripod, and Extra-Extra heavy Gimble Head at 5.375 miles into the trip?  Oh, I must have forgotten. Based on the results of the night-time shoot, I am striking those thoughts from the official July 21st transcripts.

Next on the plan is to capture images at dawn.  I arise at 5:30 AM to prepare for shots likely to be captured around 6:25 AM.

After the sunrise shoot I make a cup of coffee, and cook some breakfast of (Freeze Dried) eggs, sausage, potatoes, red, and green peppers.

I have thought further about the situation if front of me.  I decide to climb up to the top of the terrain I have just photographed lakeside – per plan.  However, I will do it without breaking camp. I will carry food, water, and camera gear, and conduct a reconnaissance of the Warbonnet Pass area.  This approach also affords me the opportunity to measure my physical condition. Historically I am a person who recovers quickly and fully from a prior extended effort.

I like this (off trail) ascent.  It provides 1,100 vertical feet of gain with some low level Class 3 rock climbing.  The views from the top of the Baron Lakes and Redfish Creek Valley are superb.

At the top of the ascent, I am reminded why I like this spot.  So many views and perspectives are available. Initially, I determine that I feel great, and that if I extend the trip a day, I could complete the entire route.  That is until I look at the route over Warbonnet Pass. A couple of long snowfields at 35-40 degree angles sit before me.  Working around the snowfield introduces less stable rock at a higher degree in angle.  I spot an Elk trail, but it looks to be even more difficult.  I do have my micro-spikes in the bag to handle these types of conditions. However, this is not a task I want to take on solo with 70lbs. of bulky gear on my back.

I choose to spend most of the day on top of world, have lunch, and even take a nap.  I head down to Alpine Lake late in the afternoon happy with my decision.

The next morning I decide to capture images of the Dawn Alpenglow, Sunrise, and early morning at Alpine Lake.

After the sunrise shoot I decide it is best to break camp and head home with a smile on my face.  Oh, and the draft beer at Redfish Lodge tastes terrific. 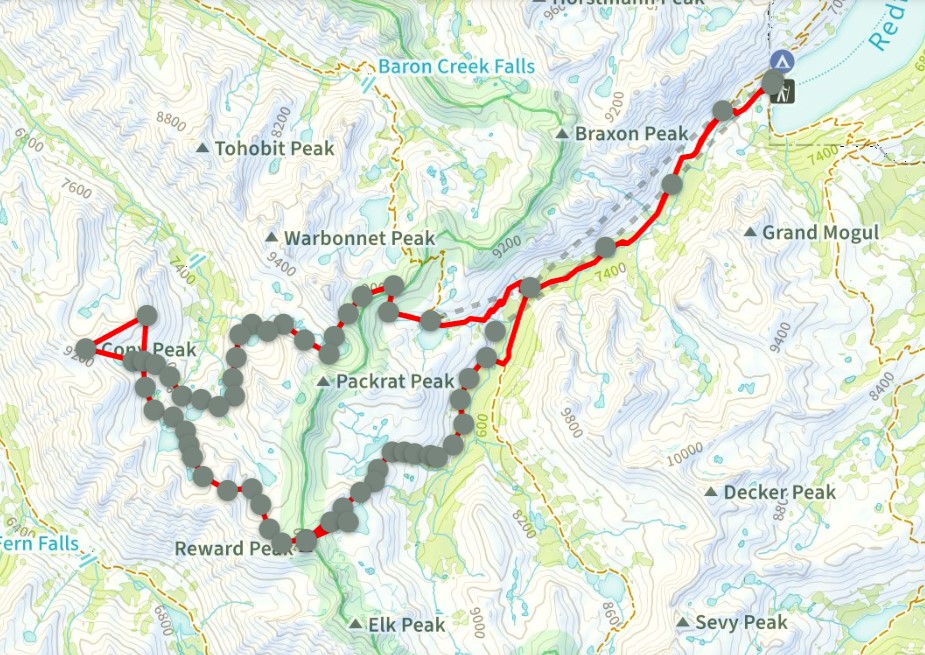 Map of the original plan.  I completed the plan to the Warbonnet Pass area north of Packrat Peak and south of Warbonnet Peak.

Images captured and displayed on this Post came from the Sony, Nikon, and PhaseOne cameras and lenses.

Nikon Z camera system, Tripod, and Gimble Head stay home. The implication is no shot of the stars and the mountains at night.

Two of the four PhaseOne lens stay home. This would reduce or eliminate photo options planned on the top of Coney Peak and Reward Peak.

Eliminate the extra two days of food brought in case of a delay or emergency.