In the early days of PHASE ONE’s move to take control of the Medium Format Market it had to navigate the decision making process as whether to purchase existing medium format product lines, build from the ground up, or partner. PHASE ONE took steps that included all of the scenarios. While PHASE ONE has moved boldly with its IQ digital back, it moved carefully on the other fronts. Mamiya’s camera body was brought into the fold and retro-fitted to work with the IQ while PHASE ONE developed the XF Camera. The same was done with lenses until PHASE ONE began collaborating with Schneider and ultimately creating the Blue Ring line.

Note: The subject matter and application chosen by a photographer influences what equipment should be chosen to succeed. While stating the obvious it is crucial this is considered when reading this Post. The iPhone is a wonderful piece of photographic equipment that serves 100 percent of my need for grabbing images of everyday life at a moments notice. It is great for many other photographic applications. However, if I am going to hike (or ski with skins) for three straight days into the wilderness (which includes multiple thousands of feet of elevation change two miles high in the mountains) then I want the best equipment at my beck-and-call. Yes, I understand the IPhone weighs little to nothing and my camera kit with tripod comes in north of 52 pounds.

I have been exceptionally fortunate, that many images I have captured have proven to be rewarding personally and a commercial success.

All of my my current gear (iPhone, Sony, Nikon, PHASE ONE and their related gear has delivered at one time or another). However, a handful of images have single-handedly covered the cost of my entire camera related equipment expenses (2012-2018) plus needed return on investment.  All were captured with the Cambo WRS 5000 as the camera body.  The results from the other configurations have been gravy.

With the advent of the PHASE ONE XF Camera and Blue Ring Lens series, the difference between the PHASE One XF package with the IQ digital back versus my Technical Camera kit shrank dramatically.  The perceived (or practical difference) became so small that I decided to stop bringing my Cambo WRS 5000 on my long backcountry shoots – given the extra weight and challenge of using the equipment in trying conditions (e.g., materially cold temperatures, sitting on top of a mountain peak after a climb – exposed to the elements).

Along comes the IQ4 151 from PHASE ONE.  At first, I am thinking that all of the computing power now in the IQ back combined with the XF Camera and Blue Ring lenses will make me seriously consider selling my Technical Camera gear.  As the IQ4 151 moved towards production, my trusted collaborators and consultants Steve Hendrix and Brad Kaye from Capture Integration suggest otherwise.  How about trying to get this reliable expertise and insight on a reliable and dependable basis via reviews on a on-line website.

Steve and Brad tell me they are astonished with the images from the IQ4 151 combined with a Technical Camera.  These guys do not throw around the word astonished very much, if at all.  While PHASE ONE was behind schedule towards ensuring all adapters and plugs would work on day-one with a Technical Camera, the basic operation did work.  Both Steve and Brad suggested that the IQ4 151 would actually breath new life into my WRS 5000 kit, given what I photograph and my exacting nature.

Steve and Brad know their stuff in a big way.  The same can be said of CI Founder Dave Gallagher.  I am just a guy from Idaho who takes photographs and each of these three guys have saved me from myself since December 2011.

If you want to look at the entire Lineup from PHASE ONE go here [HERE].

PHASE ONE is proving to be a determined development company that happens to be in the photographic equipment and software business.  The IQ4 151 is no exception.  PHASE ONE is pushing the envelope.  That can be a bad or good thing – depending on execution.  Seeing the IQ4 151 is effectively a ground-up new device that just happens to fit inside the same box would be a challenge for any company to deliver all that has been promised on day one.  PHASE ONE chose not to delay the delivery of the sensor and a decent portion of the programming features of what has been promised.  The downside is that many other features and functions need to be delivered in updates.  This is the world of commercial electronics in 2019.  PHASE ONE is not unique on this front.  Unfortunately, for example, full functionality with every type of cable and synchronization that can and should work with the third-party Technical Cameras offerings was not incorporated into the first production delivery of the IQ4 151.

The implication to me personally is fully synchronized cables for the Cambo WRS 5000 Technical Camera are not available at the moment.  That is disappointing. However, Electronic Shutter shooting and black card virtualization is in place for the PHASE ONE IQ4 151. The IQ3 100 has similar functionality, but it involves more time and steps to complete. What that means is the type of shooting I would want to perform is ready, able and highly efficient with the PHASE ONE IQ4 151.

When advising me on the topic of ES, Brad says that some undesired artifacts might appear (e.g., strange pixilization of some colors or people contorted) in the image is there are fast moving objects involved in the composition. When advising me on the topic of ES Steve suggested the better result might be with the ES, because there would be no moving parts (i.e, shutter).  Both guys prove to be correct, and helps greatly in the decision process of whether to use ES or synchronized cables.

The Results of the Second Test Go First

Headline: Casting in images is as important as it is on Broadway and in Hollywood

An X/Y Technical Camera allows you to adjust image capture to the Left and Right and Up and Down without change to the point of focus.  If you purchase the capability, a lens for a the Technical Camera can ad tilt and swivel to change point of focus dependably without introducing body movement or vibration.  These aspects are material if you desire an optimized composition and want a spectacular panoramic image. Why? You can take the time to tweak the composition of the shot while mitigating (or eliminating) the risk of losing shot quality given distortion, vibration, and or an unintended dramatic change in focus and angle. For me, this means I have the tools and can spend the time to get the shot(s) dead-to-rights. Note: after traveling for multiple days to get to a location, I want these options available to me.

As discussed earlier, the Cambo WRS 5000 and Rodenstock 32MM HR Lens are using the Electronic Shutter feature of the IQ4 151 with built in Black Card Substitution in my comparison shots.  In comparison the IQ3 100, requires a Black Card Substitution be built after each shot – and while really important – this takes time. Some experts would say that synchronized cable shooting with an LCC profile created from a White Card shot (as I normally would do with the IQ3 100) is a logical alternative and would produce a better result for the TC.

So why all the hub-bub?  Color Casting.  Okay everyone, say it with me; Color Casting.  In short, the TC and lens are manual devices with no electronic capabilities to deal with the angle of light, imperfections in the lens, and other factors.  While moving the TC up and down and left or right can be a huge factor in enhancing the composition of the image, the implication is a potentially negative casting of color can be introduced.  The Color Cast is eventually eliminated by taking an additional shot with a translucent white card in front of lens and applied during post processing. For details and a better explanation read Brad’s article [TC with IQ4 151]

The IQ4 151 virtually eliminates Color Casting and the time needed for Black Card substitution. Hmm, lets see… reduce time delay and eliminate extra shots?  This is a material advantage for the IQ4 151.

As is evident the IQ3 100 has a significant cast of color to it.  The IQ4 151 has none.  To be clear the Color Cast can be eliminated with the image from the IQ3 100, but many more steps and time are involved.

Camera Position and Practical use of a X/Y TC

So is the ability to quickly adjust the composition of the photo to be taken via the X/Y TC (enhanced with a tilt and swivel lens) that big a deal?  Can’t you just move the tripod or where the camera points? In many shots it is not a big deal and the location of camera and tripod can simply be changed with little downside to the result.  However, there have been many times were it is a big deal.  For example, attempting to moving back 10 feet (to get more sky above the mountain top being photographed across from the peak you are shooting from) will result in a 1,284 foot fall to your death.  For example, spending 10 minutes to find the better spot in rugged terrain often can result in the shot being missed altogether.

Vignetting (darkness at the edges) still occurs about equally with both the IQ4 151 and IQ3 100.  This aspect is a function of the lens and not the digital back.  The implication to me – at least at this point in my understanding of the capabilities of the IQ4 151 – was to apply the use of the White Card and an extra shot.

The Results of the First Test Go last

For the sports oriented person, this is test is like Heavyweight Boxing at its peak and the match is Ali versus Frazier with Howard Cosell making the ringside call. 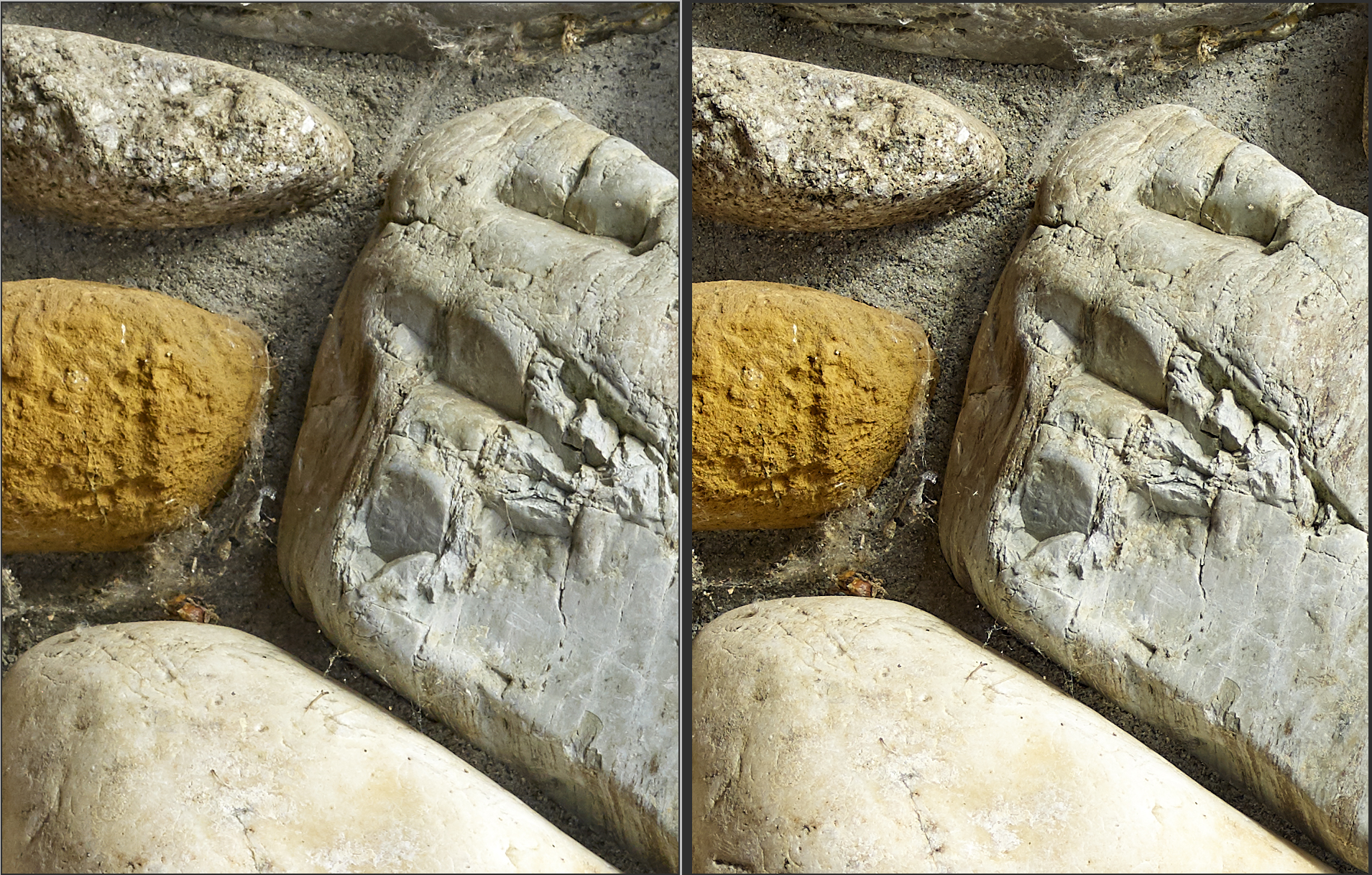 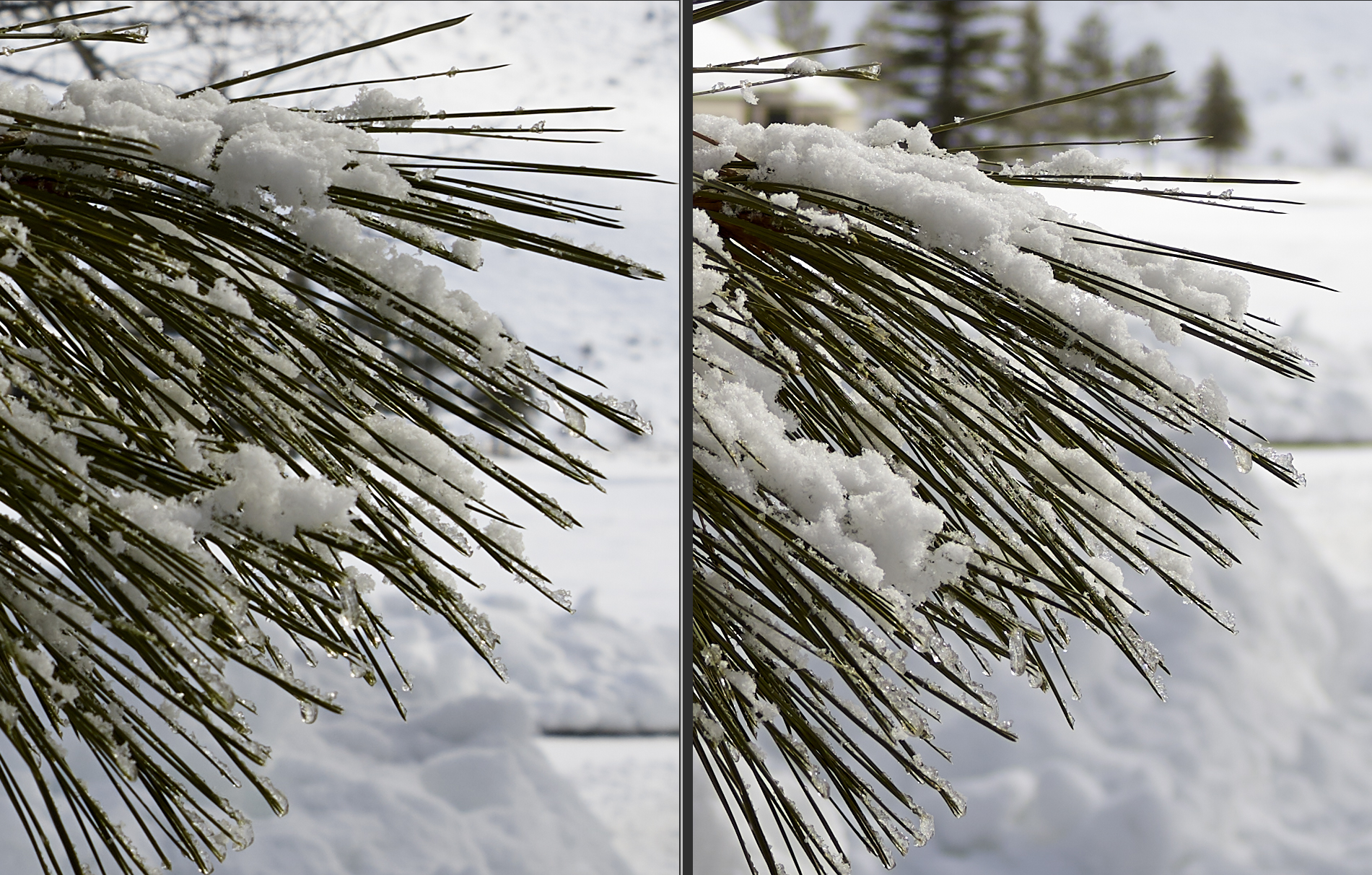 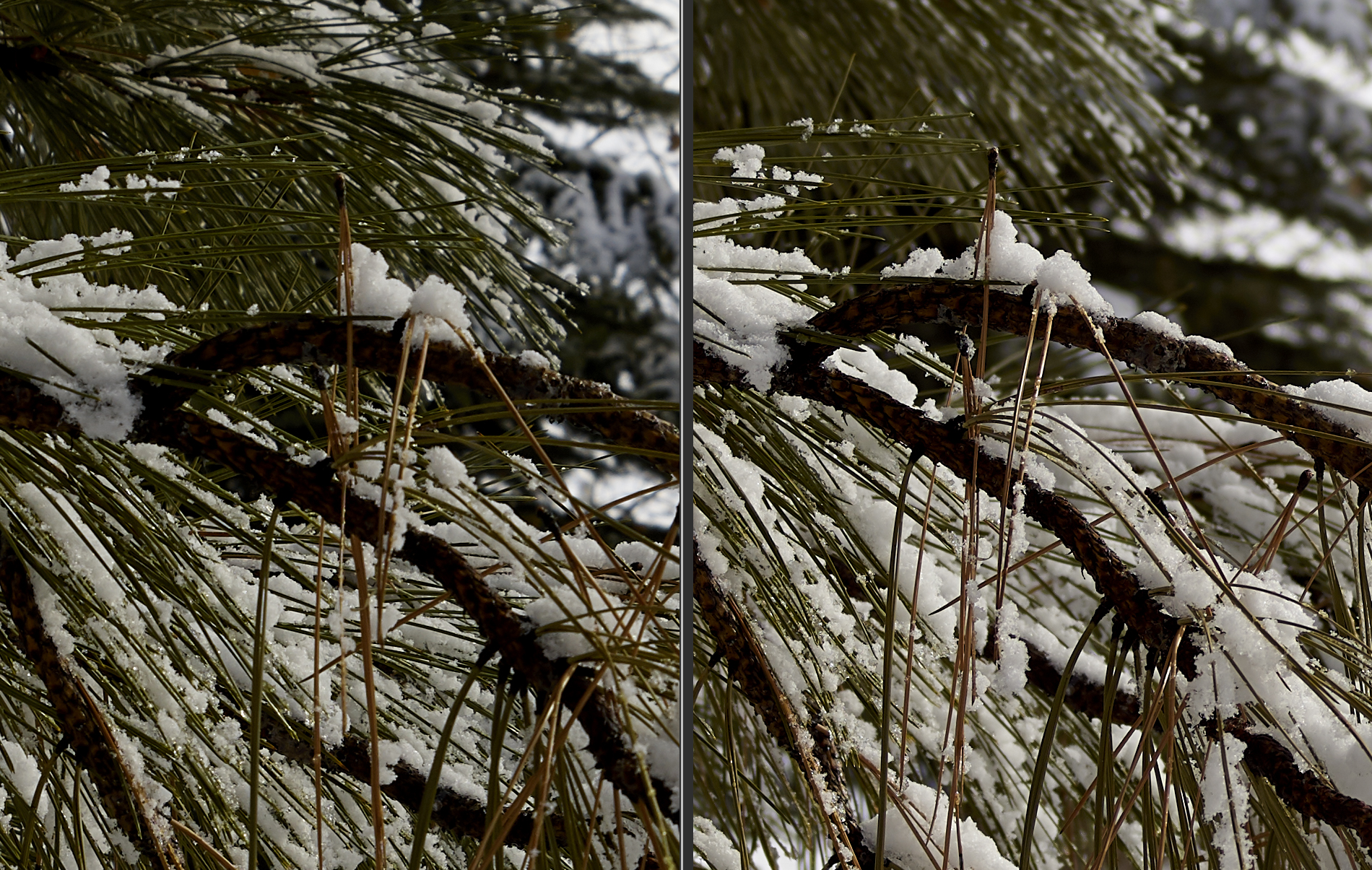 The IQ4 150 with the 35MM Blue Ring is utterly superb.  However, their are times when the Cambo WRS 5000 with the 32HR lens takes the crown.

Note: These comparisons reveal directional differences given my shots were not taken in highly controlled environments.

Message to PHASE ONE… deliver the synchronized cable capabilities for Technical Camera’s in your next firmware update.  You are On The Clock!

Please do not let Linda know that you noticed all the dead bugs and spider webs in between the stones on the River-rock Column images at the front of the house.  I will argue it is FAKE News!

It should be noted that I am my own guy and have not been remunerated (I love this term) by PHASE ONE, Steve Hendrix, Brad Kaye, Dave Gallagher or CI in any form or manner for my comments or remarks.  I continue to use, purchase, and enjoy 35MM related camera gear (from Nikon, Sony and Sigma) and encourage you to to do so as well if it is best for your situation.  The Mirrorless platforms are pressing the Digital Single Lens Reflex (DSLR) platforms in a big way. I also shoot with my Apple iPhone if the situation warrants – and make no apologies or condescending remarks when doing so.  I mean what I suggest and imply.  While I think highly of PHASE ONE gear, photographing Mother Mountain Goats and their babies (less than 10 days old) in the high peaks of the Rocky Mountains without disturbing them called for the Nikon D8XX camera bodies and the Nikkor 1000MM Lens.  We brought along PHASE ONE Gear as well on the climbs that entailed 3,000 – 4,000 vertical feet of ascent with the starting point being 7,000 feet elevation.  Having both platforms available served us well.