The Danish manufacturer announced the system upgrade in August 2018, with the intention this new offering would further widen the gap between themselves and the competition as the provider of the best and most powerful commercially available camera system in the marketplace.

It is not my intention to duplicate specification sheets of the offering.  The nuts and bolts are located [here].

Founded in 1993, PHASE ONE has been on a relentless mission to create the best high-end offering available in the world for almost 10 years running.

Has PHASE ONE met their goal of creating the new Standard Bearer? Is the price of entry worth it?

After 30 days of use, the answer to the first question is – at least in my opinion – yes.  As each day passes I get more comfortable with this determination.  However, I could change my mind over the next few weeks of heavy duty field testing. Another aspect that could change my mind is the timeliness of delivery of features and functions promised by PHASE ONE.  In my opinion, PHASE ONE is clearly pushing the envelope (which if implemented correctly is a great thing) and has missed some deadlines on providing features and functions from a firmware perspective (which is a bad thing).

The answer to the second question is a qualified yes. If the money you make for selling a fine art photographic work or a body of work from a photo shoot will ultimately pay for the disproportionately initial high investment – then yes.

In my case, people can walk into MESH Gallery and view the image above (Lunch in Lower Stanley) at 72 inches – On Canvas Framed.  They can purchase a Limited Edition version from 24 inches to 144 inches in size.  When the artwork is larger than 40 inches the IQ4 150 is proving to make a a material difference in the quality of the results.  Less than 40 inches? – not-so-much.

The answer to the second question is yes – if money is no object and ego, or the desire to own the latest shiny new object rules the day.

When PHASE ONE announced its new offering, the advancement being suggested was material if not astonishing:

A material increase in resolution (101-151 Megapixels)

A new technology platform to support the sensor

While I am a person willing to consider new propositions, I do become skeptical when major hype is included in the announcement (e.g, seamless, future-proof, promotional material includes pictures of female models boxing in Cuba).

When PHASE ONE stated their new platform was named “Infinity” – I will admit I rolled my eyes with a bit of sarcasm.  Well… I have the product in hand and after 30 days so far so good – so I may have to eat some crow.

However, from a Risk Management perspective, a ground-up product change is highly challenging from delivery perspective and PHASE ONE is doing so with the IQ4 150.  However, the risk is materially mitigated given my relationship with my vendor.  I have my IQ3 100MP for the A-B Comparison and until then, I feel I am good to go.  This situation has always been the case.

My plan is to field test and post my thoughts on the new system over the next few weeks.  My goal is to provide observations and opinions based on real-world use of the product.  I will attempt to provide a narrative that is not drowned out by pixel peeping, while at the same time is not filled with generalities and platitudes.

I am an early Adopter. VHS over Betamax (although Betamax was better technically, licensing would favor VHS). I bought into and enjoyed Laserdisc and DVD from the start.  I chose Bluray over HD-DVD (although HD-DVD and Bluray were similar, politics would favor Bluray).  I bought into the Macintosh and MS-Windows graphical user interface platforms since their market introductions (actually prior to). I use both platforms to this day, but also have Chromebooks and Android devices.

In 2012, as the owner of the best Canon, Nikon and Sony 35 MM formats could offer in the marketplace, I considered, evaluated, and chose to invest in PHASE ONE and the larger sensor 645 format system they advocated.

The choice to move to the 645 platform was not easy.  The decision was compounded by the fact that the PHASE ONE offerings are expensive.  Before making the move, I carefully evaluated and field tested the offerings from Leica, Hasselblad, and Pentax.  The problem for Leica, Hasselblad, and Pentax is they licensed cropped, non-full-frame offerings based on older technology digital CMOS Sensors.  PHASE ONE chose to go 645 Full Frame and then developed with Sony the next two generations of digital sensors – 16 Bit, 101MP 54mm x 40mm Frontside CCD and 16 Bit, 151MP 54mm x 40mm Backside CMOS.  The three Letter Acronyms and terminology is gobbledeegook to 99 44/100 of the population.  So where do I sit?  I chose to make the jump and have been rewarded handsomely on a variety of fronts since.

Over the past number of years, PHASE ONE bought out and brought in house one of the standard bearers of the 645 body and camera lens makers (i.e., Mamiya). For the past 10 years, PHASE ONE has worked with Schneider-Kreuznach to create the best lenses available for their 645 offerings.  The PHASE ONE work with Sony on the digital sensor has already been pointed out previously.  While there have been hiccups along the way, PHASE ONE made it clear their XF (Camera Body) and Blue Ring (Lenses) and IQ (Digital Back + Sensor) were to be the very best available in the market.  At the same time PHASE ONE – in my opinion – remained smart and savvy, and continued to support the Technical Camera Body manufacturers (i.e., Alpa and Cambo) and the lenses they used (e.g., Rodenstock) that work with the PHASE ONE Digital Back offerings.  I own a full WRS 5000 Technical Camera kit from Cambo and supported lenses.  While the margin of difference is shrinking, if I need a 10 out of 10 from a photo-shoot and shot – the WRS 5000 Cambo Tech Body, Rodenstock or Schneider Lens, and IQ Sensor is Paper Money Daddy!

Another crucial aspect is having a resource to assist in identifying and selecting equipment and or upgrades that ultimately will prove to be in your interest.  Equipment such as we are discussing should not be bought without it.  I cannot stress this point more empathically.  For me, that means Steve Hendrix, Brad Kaye, Dave Gallagher and Capture Integration of Atlanta.  The relationship is in year seven and is stronger today that when it started in December of 2011.   Steve, Brad, Dave, and CI have advised, consulted, represented my best interest, and most importantly protected me from myself.  Your voice activated auto advisor does not meet that standard.  In short, do not fool yourself; you get what you pay for and there are no free-lunches.

It should be noted that I am my own guy and have not been remunerated (I love this term) by PHASE ONE, Steve Hendrix, Brad Kaye or CI in any form or manner for my comments or remarks.  I continue to use, purchase, and enjoy 35MM related camera gear (from Nikon, Sony and Sigma) and encourage you to to do so as well if it is best for your situation.  The Mirrorless platforms are pressing the Digital Single Lens Reflex (DSLR) platforms in a big way. I also shoot with my Apple iPhone if the situation warrants – and make no apologies or condescending remarks when doing so.  I mean what I suggest and imply.  While I think highly of PHASE ONE gear, photographing Mother Mountain Goats and their babies (less than 10 days old) in the high peaks of the Rocky Mountains without disturbing them called for the Nikon D8XX camera bodies and the Nikkor 1000MM Lens.  We brought along PHASE ONE Gear as well on the climbs that entailed 3,000 – 4,000 vertical feet of ascent with the starting point being 7,000 feet elevation.  Having both platforms available served us well.

If you have aspects you would like for me to test and comment or you would like a link to my Dropbox page for the actual image files to review yourself:

Test #1 – Compare the image sensor capture of the product to one of its predecessors: IQ4 151MP versus IQ3 100MP

I decided to compare the IQ4 151MP against my current back the IQ3 151MP by performing an A-B Comparison using the same XF Camera body, and Phase One lens with all settings being equal.  The camera profile was to capture the image using the default settings of Outdoor daylight and Film Contrast.  The images are displayed side by side in Capture One without any adjustments.

Note:  Click on the image to view in larger size. For review on a web-page the comparison result is more directional than comprehensive.  RGB images in 72 dpi will not yield anything definitive.  Therefore, all the the actual images in this test can be made available to you if desired.

Scene #1: The entrance to my home.  AM 22 minutes after sunrise in January Temperature 12 degrees Fahrenheit 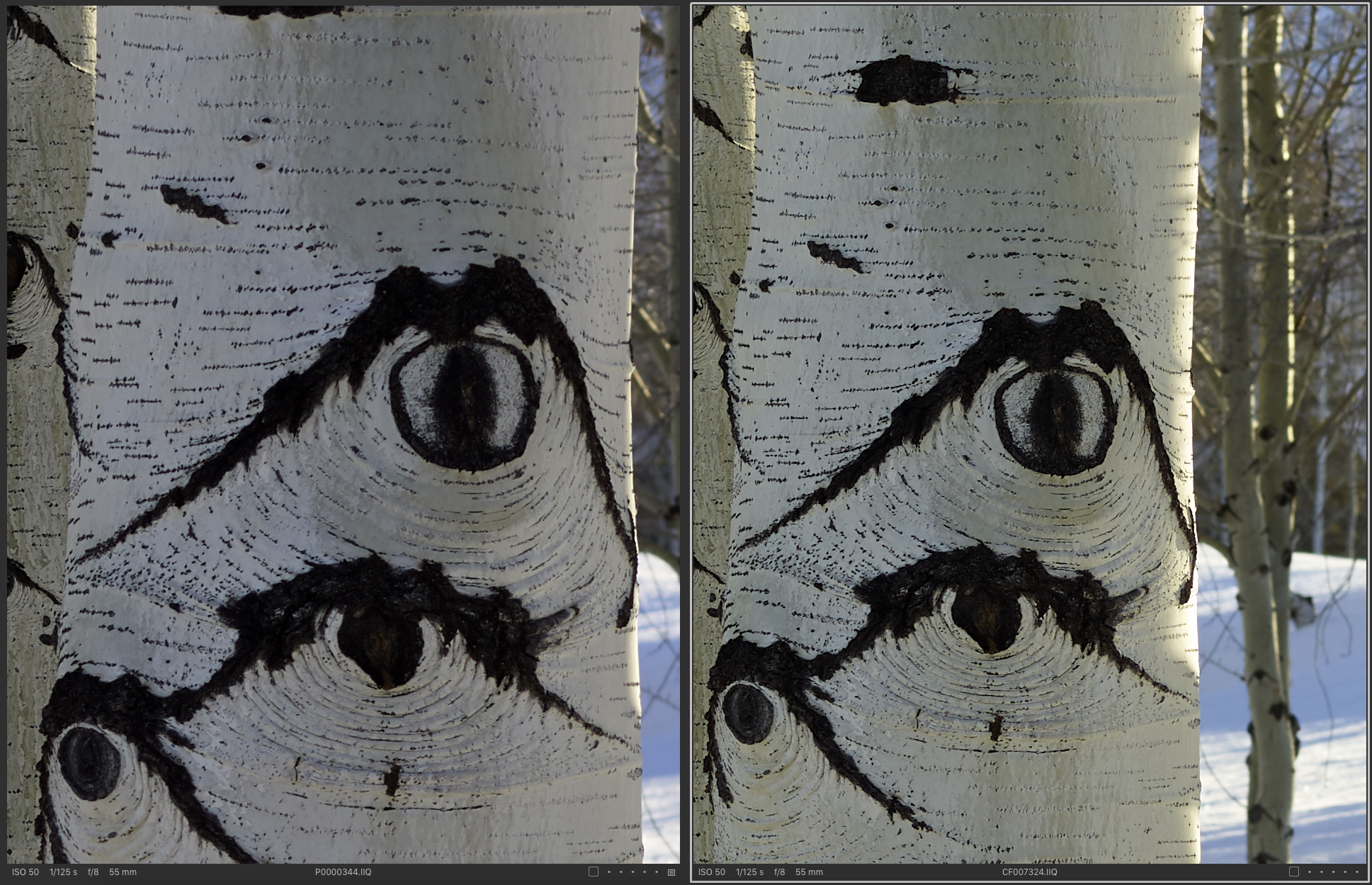 Scene #2: The entrance to the Lift Tower Lodge.  AM 60 minutes after sunrise in January Temperature 14 degrees Fahrenheit 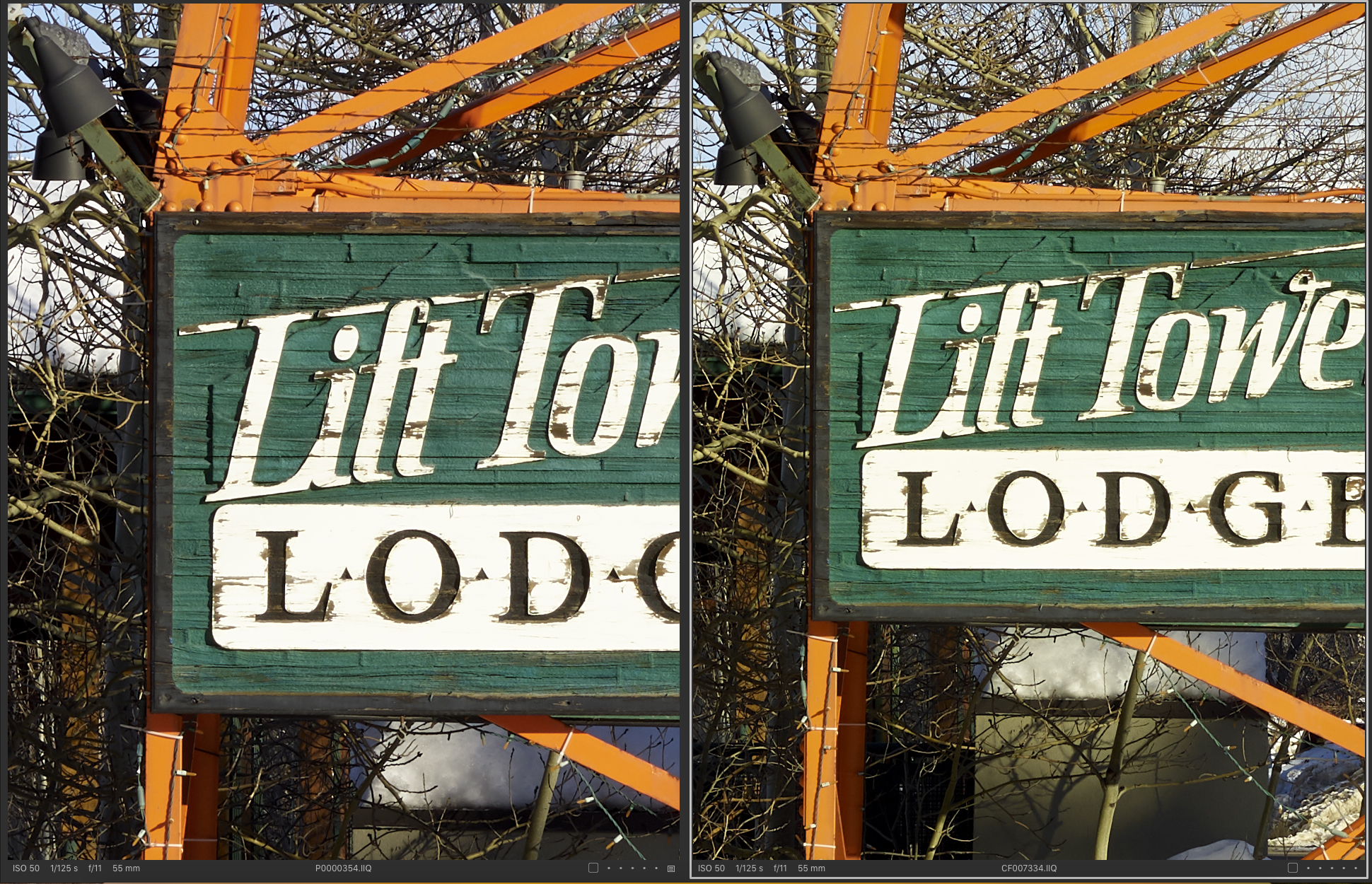 Scene #3: The entrance to the Sun Valley Lodge. AM 45 minutes after sunrise in January Temperature 14 degrees Fahrenheit 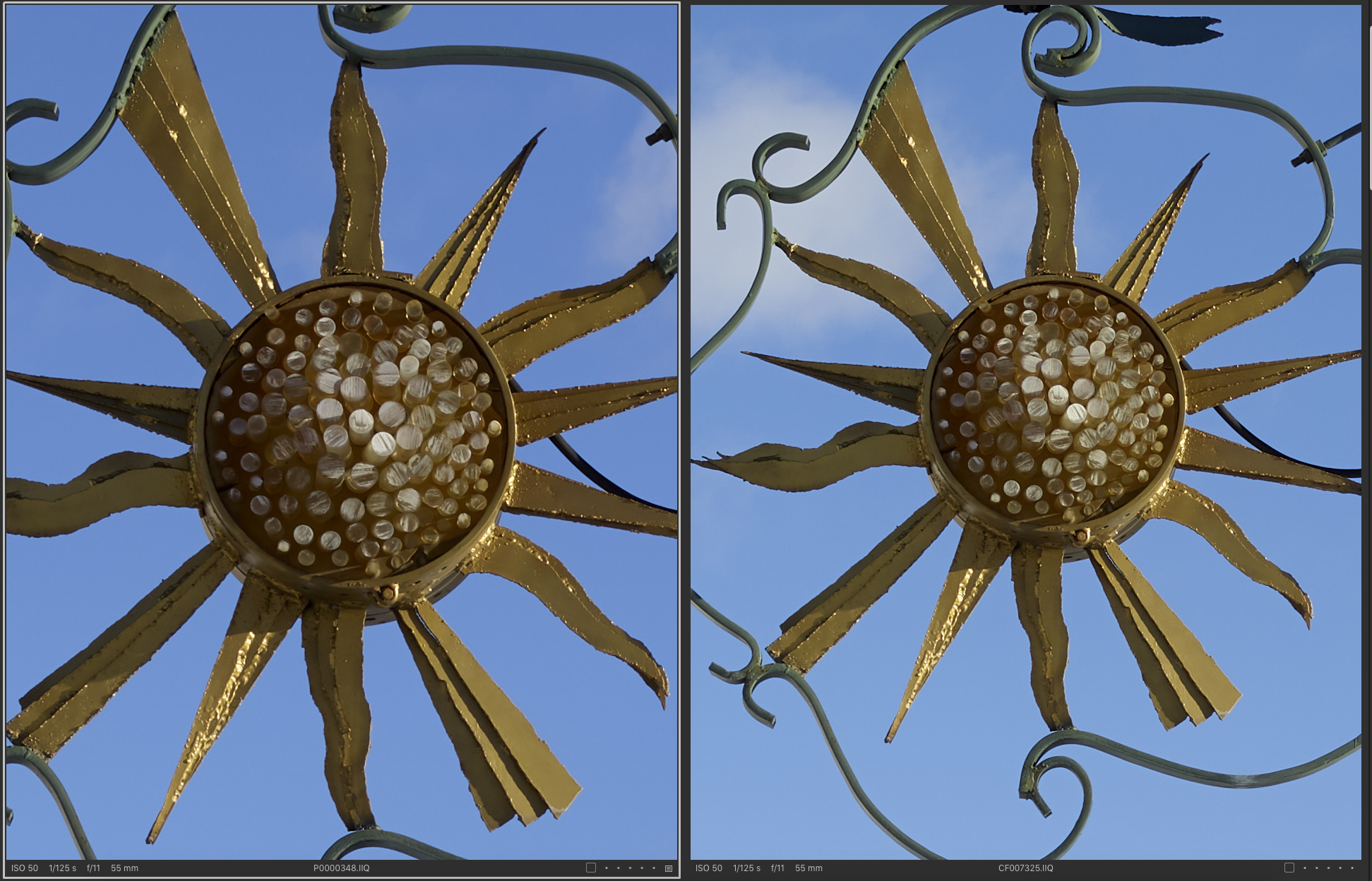 Scene #4: The entrance to the Kentwood Lodge. AM 50 minutes after sunrise in January Temperature 14 degrees Fahrenheit 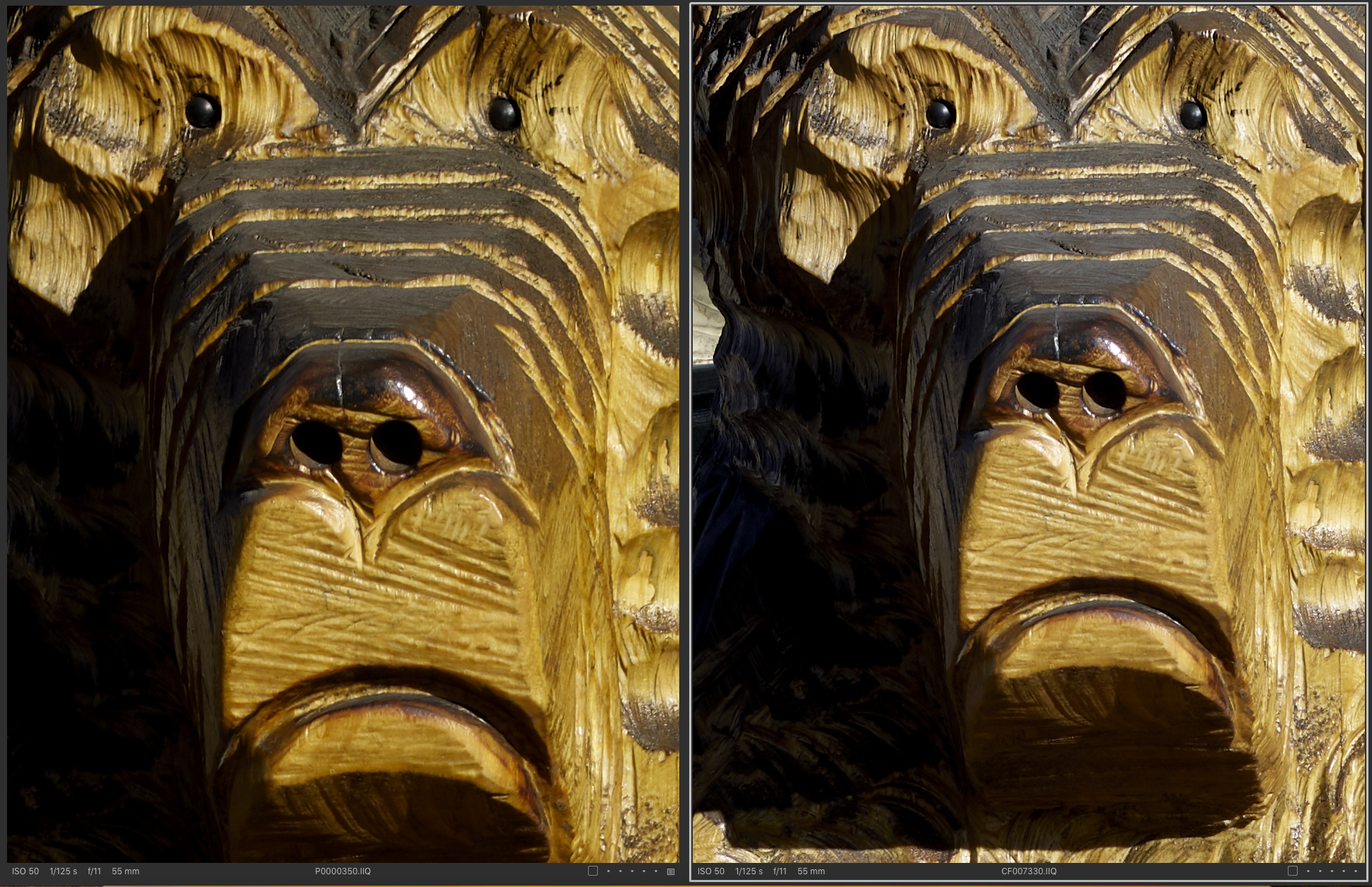 Scene #5: The entrance to the Sisters Store. AM 50 minutes after sunrise in January Temperature 14 degrees Fahrenheit 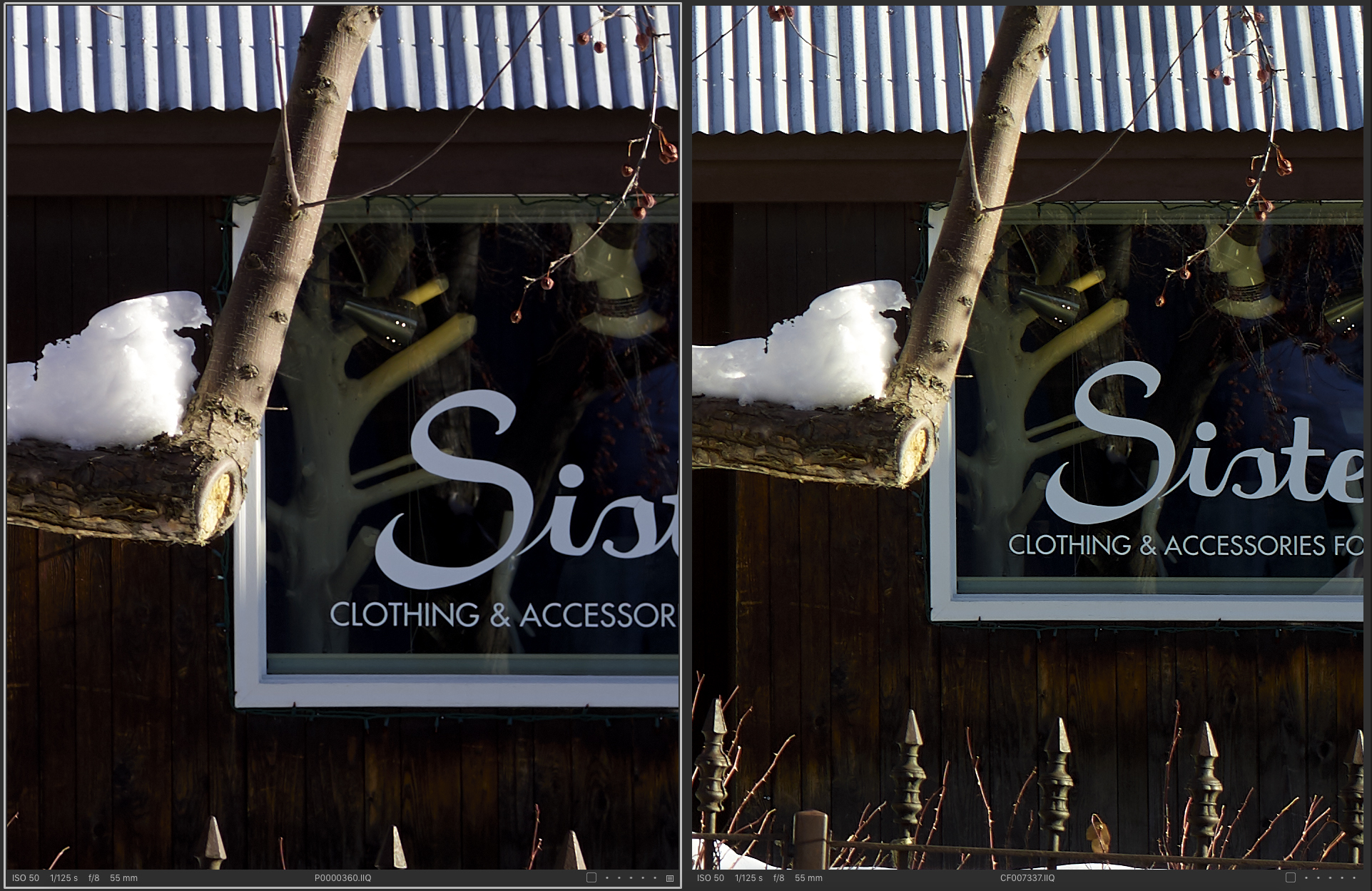 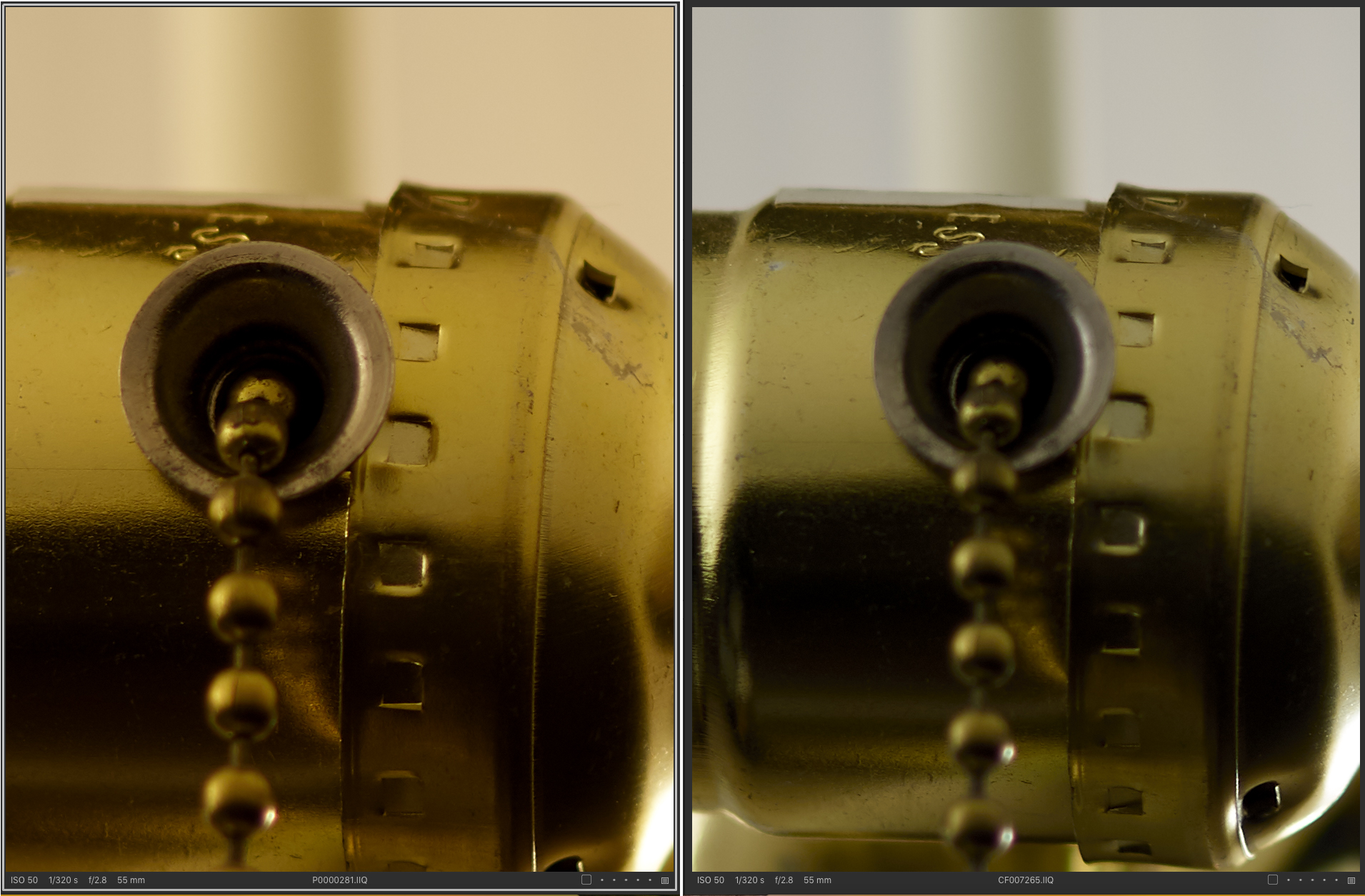 Scene #7: Winter on the Harriman Trail. AM 3 hours 10 minutes after sunrise in January Temperature 27 degrees Fahrenheit 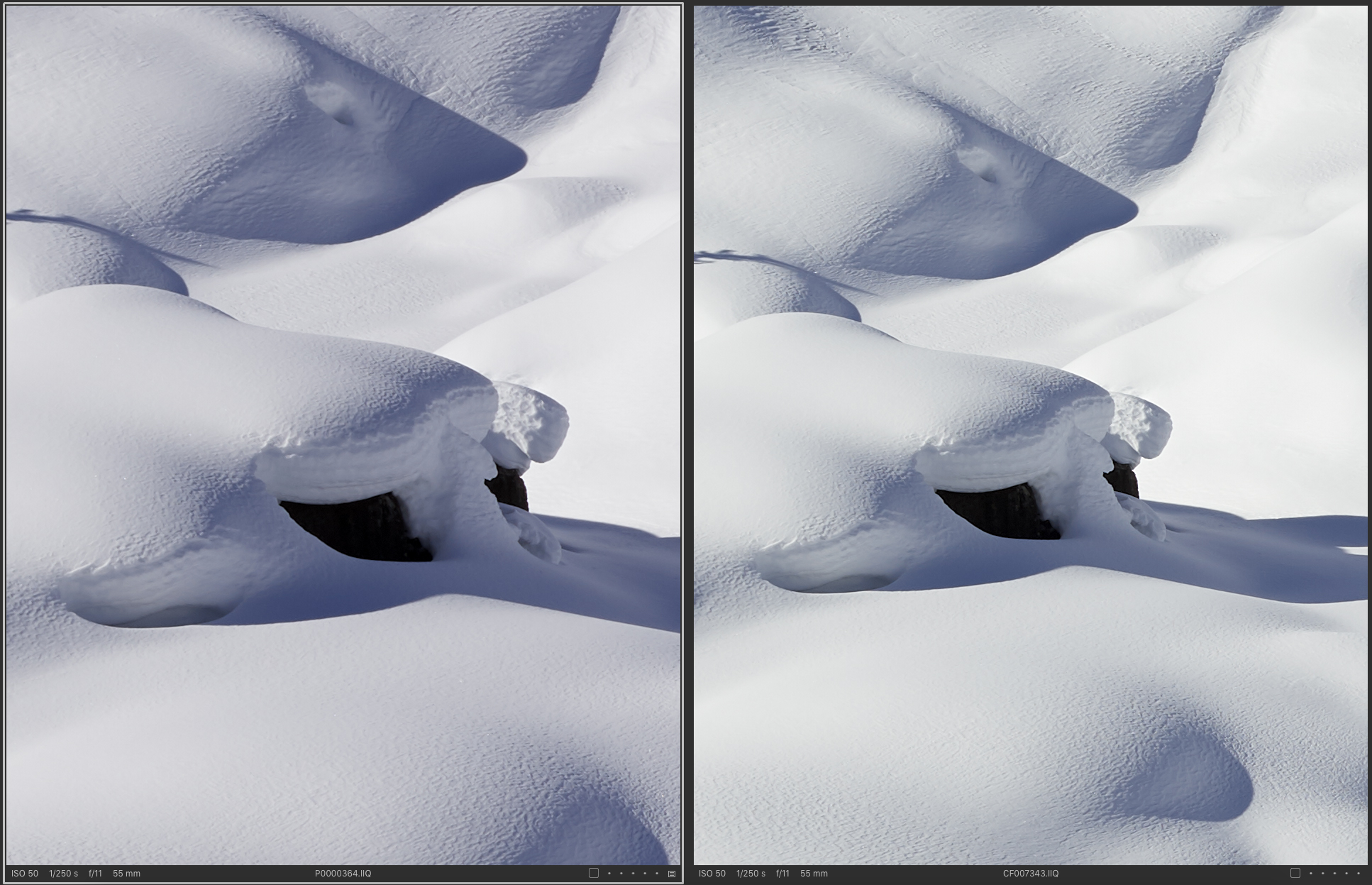 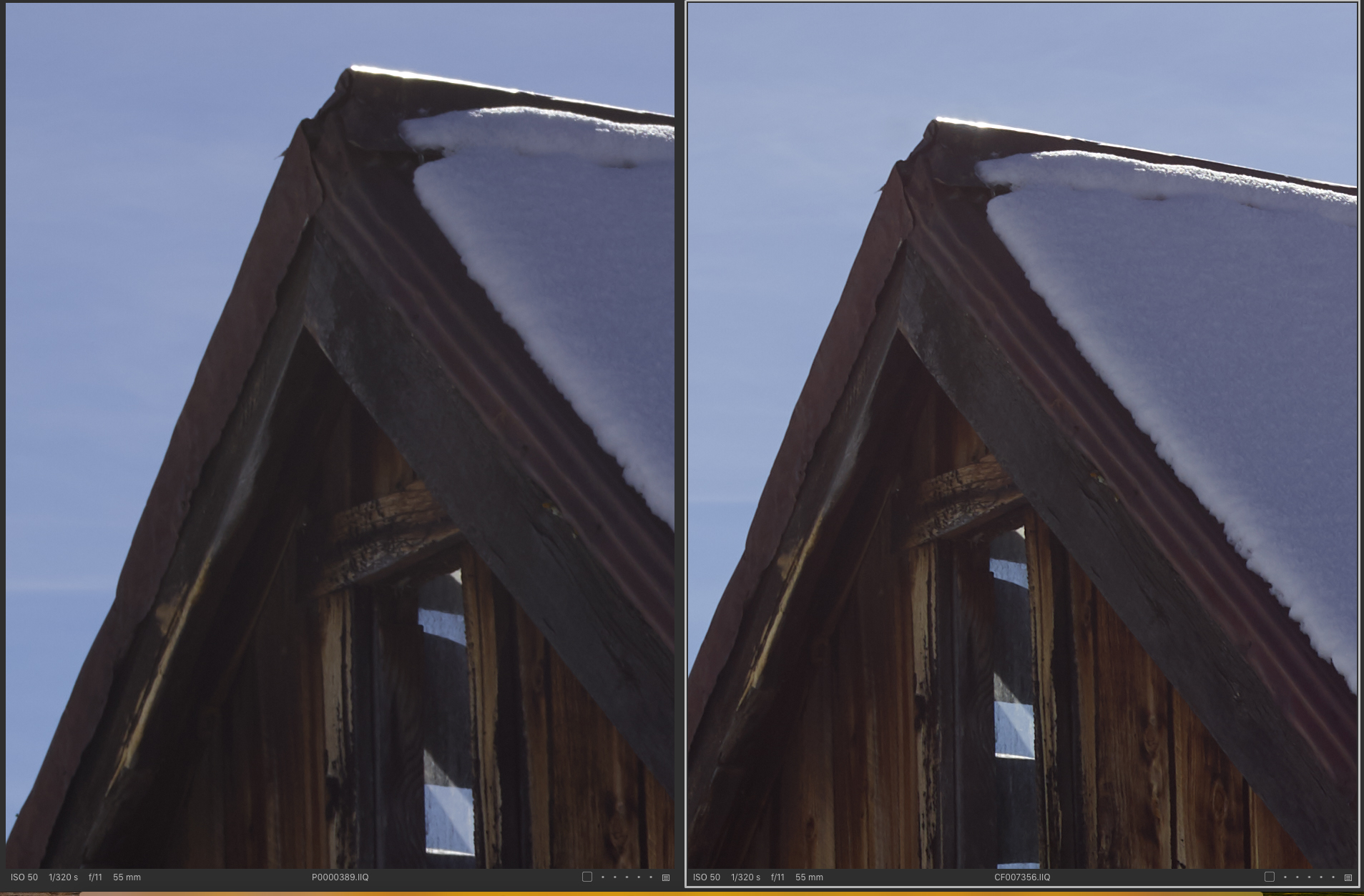 The Digital Sensor Considered in Context to Film.

The images from the eight scenes above are compared as captured and unprocessed. Digital images like their film counterparts do need processing to achieve an accurate, acceptable end product.  There are (in history) about 32 major makers of still-camera film for print.  Each offers/offered various products that were created to handle different ISO levels, light sources, grain, contrast, tint, and other aspects.  As a photographer you needed to pick from one of them when shooting and take advantage of or be subject to its design bias. The beauty of the digital sensor is you do not have to pick as it captures an image and can be processed for basic aspects such as White Balance, Color Balance and Levels.  It can be processed further given the ISO as shot and light source. The image can be processed further to achieve a desired effect that is available given the sensor’s dynamic range and levels of gray scale/color depth.  The image can be processed (or edited) even further in what most people term photo-shopped; (e.g., change color from red to blue, make the moon larger, add or remove something such as a fence or person, etc.). All from the same single image.  I do enjoy it when a proper noun (Photoshop from Adobe Systems) becomes a verb in practical conversation.

The PHASE ONE IQ4 150 Device provides a tremendous advantage to a photographer.  The IQ4 150 offers 151 megapixels of 16Bit Color uncompressed RAW natively.  Virtually no other commercially available digital camera provides such a capability.

PHASE ONE 16Bit (and lower with and without compression if desired).

And what is the implication of xxBit color – 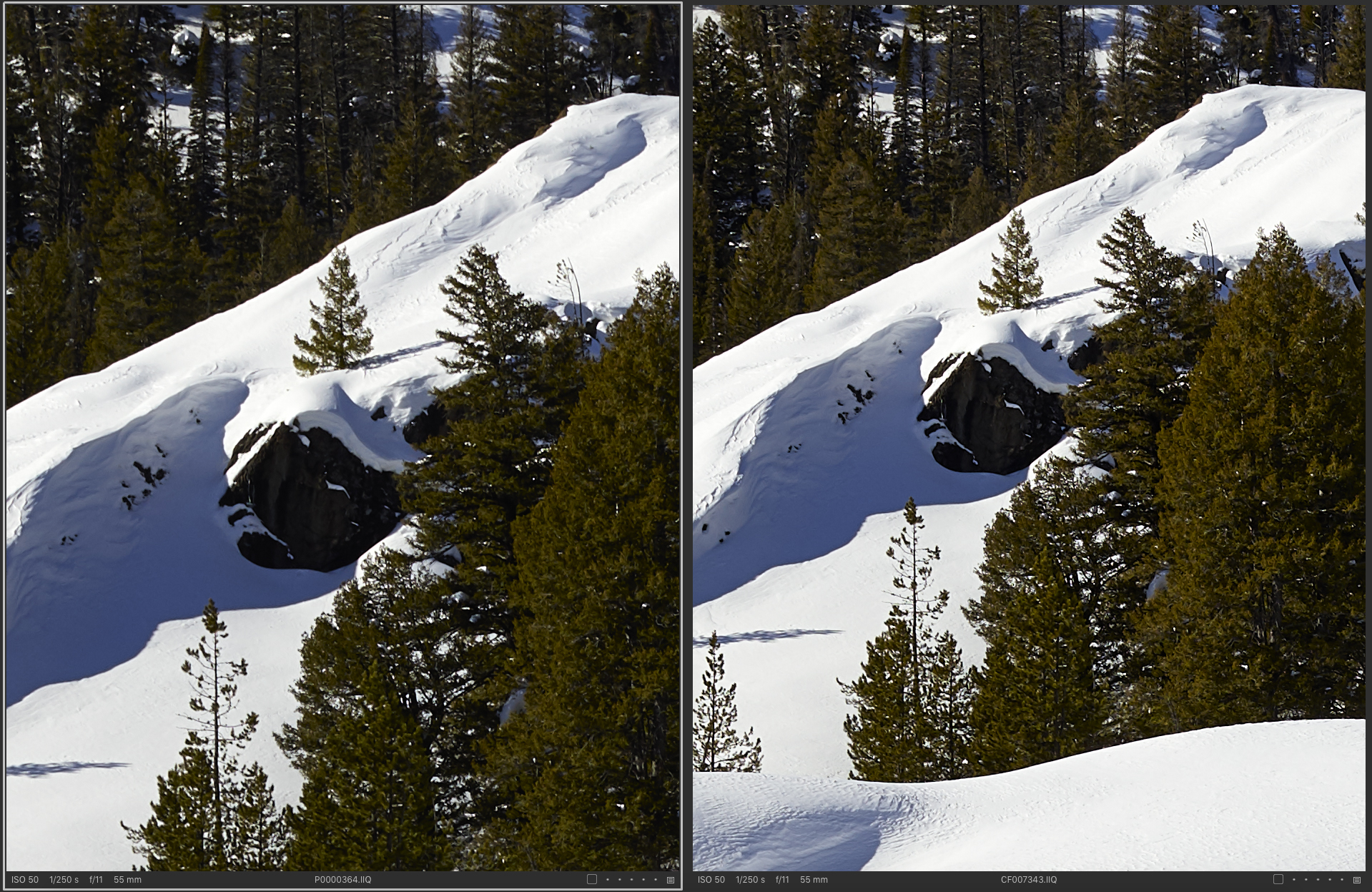 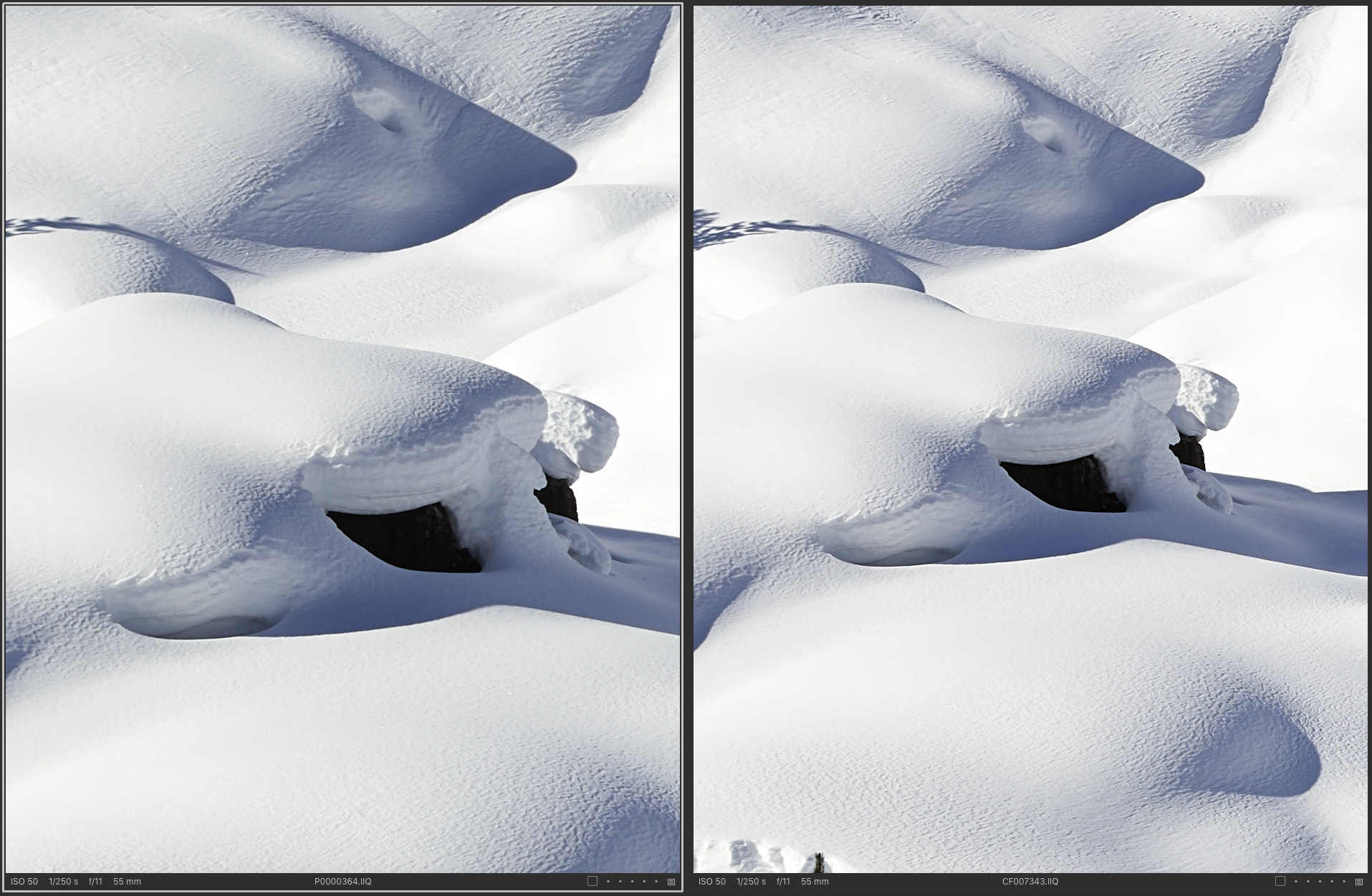 Next POST:  The IQ4 151 Digital Back used with a Technical Camera