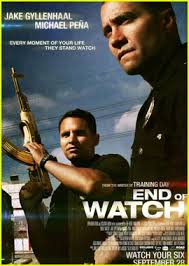 It feels as if every single approach to making a police movie has been made by Hollywood – and then comes David Ayer’s End Of Watch.

Ayer’s blends a number of story-lines together that present the police department and this team as neither the super clean heroes established by Jack Webb’s Dragnet in radio, film and on television or the ugly, tainted and corrupt scum of the earth of recent release; two which Ayer’s authored -Training Day and Dark Blue.

Instead, End of Watch provides (literally) a Point of View perspective of the human side of two guys who are incredibly close with one another.  It is clear these two police officers are on patrol to serve and protect the citizens of Los Angeles.  Do they stretch the law? Sure they do – about as much as someone who mails in the utility bill the day before it is due and hopes not to get a late charge.  The dialogue and chemistry between Gyllenhaal and Pena is as good or better than any recent buddy road flick or Bromance by Judd Apatow.

Gyllenhaal’s Brian Taylor is extremely inquisitive and Pena’s Mike Zavala is exceptionally thoughtful and full of insight.  This combination of personalities leads the two officer’s into a boatload of action.  It is hard to imagine the amount of events happening to these two officer’s let alone a squadron in such a short period of time.  Yet, the movie moves with such a fluid nature that this improbable amount of events never enters your mind during the viewing. Eventually, the curiosity of one and support from another leads these officer’s into a final harrowing situation.

The cinematography is abrupt, high in resolution with a wide palette of color. The style is made possible by a clever aspect of the storyline of which is completely logical given society’s fascination with technology.

If there is any one aspect of the film that feels stunted it is that of the female leads (and spouses of the officers) Anna Kendrick (Up in the Air, 50/50) and Natalie Martinez (Death Race). Although not cardboard character’s neither role is developed to any level approaching the two officer’s.

Note:  I tried to keep count of how many times the bad people in the film used the acronym associated with For Unlawful Carnal Knowledge (first attested around 1475) but lost count.  It proved easier to count the words not using the acronym.