A picture is worth a thousand words, so the saying goes.  A picture can also change carefully established plans.  I am a living example.

The plan was a 2nd photo-shoot of the Warbonnet Peak and Monte Veritas region. However, my support team of Chris and Sara Lundy (co-owners of Sawtooth Mountain Guides) viewed Sunset Serenade in the Sawtooths after its posting and pointed out during a planning session that we had never photographed in this remarkable region.  A few weeks earlier, Claire Porter and I captured Devan Jackson’s herd heading out to pasture after a hard day of work. The image; Sunset Serenade in the Sawtooths features the high peaks of the mountain range – including Decker Peak, Finger of Fate, Sevy Peak, The Arrowhead and Mount Cramer. In short, these peaks and others in the line represent a wall of granite that reaches 4,000 vertical feet above the valley floor in less than six miles distance.

After 10 minutes of discussion, we change plans.  We decide to attempt to cover the terrain between two of the highest peaks in the Sawooths; #3 Decker Peak (10,704) and #2 Mt. Cramer (10,716) in four days. The highest peak in the Sawtooths – Thompson Peak (10,751 ft)  has been the subject of a number my climbs and photo-shoots. Summiting Mt. Cramer on this trip will only be possible if we find and navigate a descent from Dave’s Peak down to Profile Lake and back up Mt. Cramer at the end of the photo-shoot.

Hell Roaring Creek is the principle drainage up to the granite blocks we plan to traverse. The first 1.7 miles from the trail-head to Hell Roaring Lake is the only travel for the photo-shoot on a designated trail.  The remainder involves cross-country travel, boulder hopping, and climbing.  Hell Roaring Creek features 10 lakes between the valley floor up to the summit areas.

Hell Roaring Creek splits at Lake Clarice (8,200 ft). The drainage to the north features The Finger of Fate, Sevy Peak, and Red Bluff Peak (aka Birthday Cake) that also provides a means to climb into the Decker Creek drainage and summit Decker Peak.  The drainage to the south features The Arrowhead,  Sevy Peak, Daves Peak and a wall of spires topping out above 10,000 feet.  Sevy Peak is mentioned in both because it acts as the divider.

Our first efforts are hiking and scrambling up to the Finger of Fate.  The temperature on the trailhead is around 90 degrees.  Travel with heavy packs in these temperatures can prove to be demanding.  The Finger of Fate is among the most challenging rock climbs in the Sawtooths.  It was first summited in 1958 by Louis Stur and Jerry Fuller. All nine known routes are technical in nature and designated as Class 5.8 or above in the Yosemite Measurement Index.  In one word – incomprehensibly difficult to the average person. 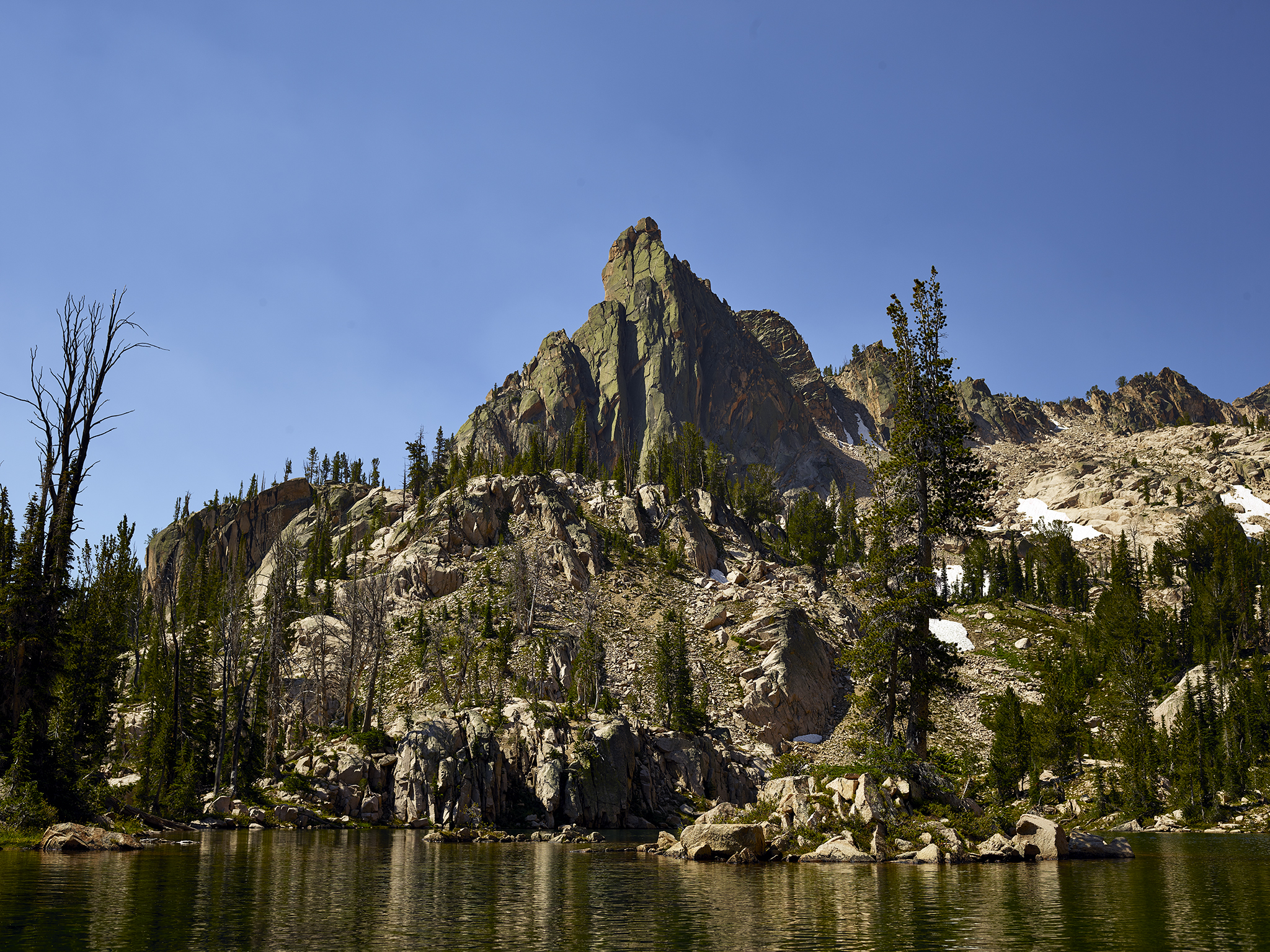 Sara Lundy has climbed The Finger of Fate via The Book (II 5.8) which is effectively straight up the spine.  We reach the lake at 8,800 ft. which sits just below The Finger of Fate.  The camp acts as our base for the photo-shoot.  After a swim, and tour of the lake in our Alpaca Raft we climb up to our planned photo point, have dinner, and capture a sunset shot. The Finger of Fate has about 1,000 vertical of prominence.  In short, it is a big building 100 stories tall at almost two miles in the sky with no elevators or glass windows to ascend with the aid of suction cups.

The next day we start out 90 minutes before sunrise for our next photo-shoot.  Our goal is to climb up to the saddle to the north and capture The Finger of Fate at dawn and sunrise. A heavy set of clouds puts us at-risk of capturing a quality image.  Patience and remaining at-the-ready from dawn through sunrise allows us to capture a winner (see photo at top).  Think – hurry up and wait… and wait… and wait.

Next up is the summit of Decker Peak.  The ascent is a total grinder.  The route is almost all on granite with multiple sections consisting of formations of large loose boulders in Class 3+ terrain.  While all three of us have years of experience operating in this type of setting – it is one of Chris and Sara’s least desirable environments as guides.  Why?  A fall in Class 3+ terrain is often fatal.  A boulder can easily be dislodged by one member falling on another – resulting in a major injury or death.  Note: We have two satellite phones (Chris and Sara) and a GPS Emergency beacon (Jeff).

The onset of smoky conditions adds to the difficulty.  From our perspective smoke from fires is not uncommon and part of the deal.  Because of the Wild Horse (May) and Mountain Goat photo-shoot’s (June) I am recently conditioned to my heavy camera bag configuration and operating at 10,000 feet or above.

Upon reaching the summit of Decker the smoke is pervasive.  However, the views are superlative.  After taking time to photograph all 360 degrees of the region we depart. On the route down we often take a sketchy route established by goats instead of boulder hopping.  Descending on boulders is eminently more difficult than heading up.  Luckily the dirt in the goat route has enough moisture content to greatly improve the ease of descent.  If the moisture level is too low – it’s over to the boulders.

To gain a break from the heat we stop at, and swim in the lake at 9600 feet.  After a superb lunch of Salami, Swiss Cheese, Triscut, and apple we return to camp – arriving at 1PM.  The Base Camp Decker round-trip occurs faster than planned. This provides time for a swim, a trip around the lake in the raft, and a brief nap.  This kind if free time is exceptionally rare for us.

During the afternoon Chris, Sara, and I discuss the photo-shoot to-date and the next two days. We all agree that too many unknowns and possible bad downsides exist to think that summitting Mt. Cramer on this trip is a smart idea.  The reasoning:

#1. None of us have traveled in the south basin in the summer.  If the terrain is the same as the north side and we are also moving camp all of us could become too exhausted to complete the section in a reasonable time before having to descend to Profile Lake.

Based on our decision, we have for the first time ever (as a team) a full afternoon and evening of free time.  We decide to explore the area without the complications of heavy packs and camera equipment.  It is fun – but the feeling is a bit weird.

The night does not provide one of rest for me.  For some reason my air-mattress fails; leaving me to a night of sleeping on a hard surface.  We rise at 4:30 AM. SMOKE, SMOKE, SMOKE is in the air.  The three of us (wearing attractive looking head-lamps) sit up and discuss the implications.  Sara points out that “the basic rule is the three of us treat these efforts as adventures that happen to be photo-shoots, and adventure wins the day.”  I ask for the rule-book to establish a determination.  Chris points out that I am the designated rule-book carrier for this trip.  Neither the rule-book or my sixth grade book report on The Life of  The Mosquito At Elevation can be found.

So up we go into the smoke… climbing up and over the towers and ridge-lines above the Finger of Fate.  As we move up through the big granite slabs the wind picks up ever so slightly to pushing to the north.  The implication?  after about 15-20 minutes the smoke departs from our immediate area and adds to the color of a spectacular sunrise across the valley in the White Cloud Mountain Range.

We work our way up to the top of the deck through chimney like granite.  The sun through this period of time moves from early dawn through sunrise.  At sunrise we have 360 degree views from the top.

The Top of the Deck heading south is completely different that the terrain heading north to Decker Peak.  It contains huge terraces of granite interlaced with native grass, flowers, gently flowing creeks and brooks with ponds of water. 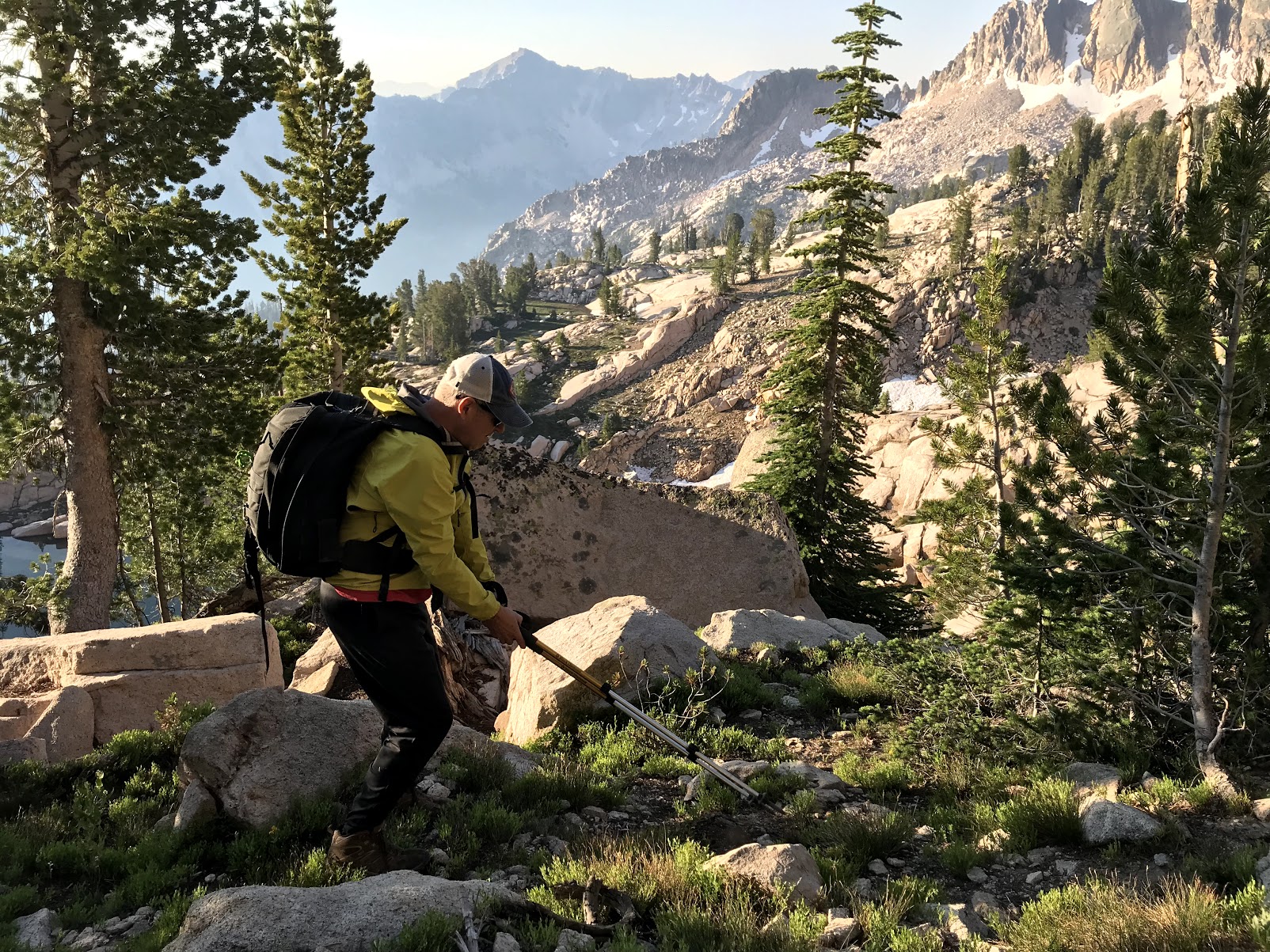 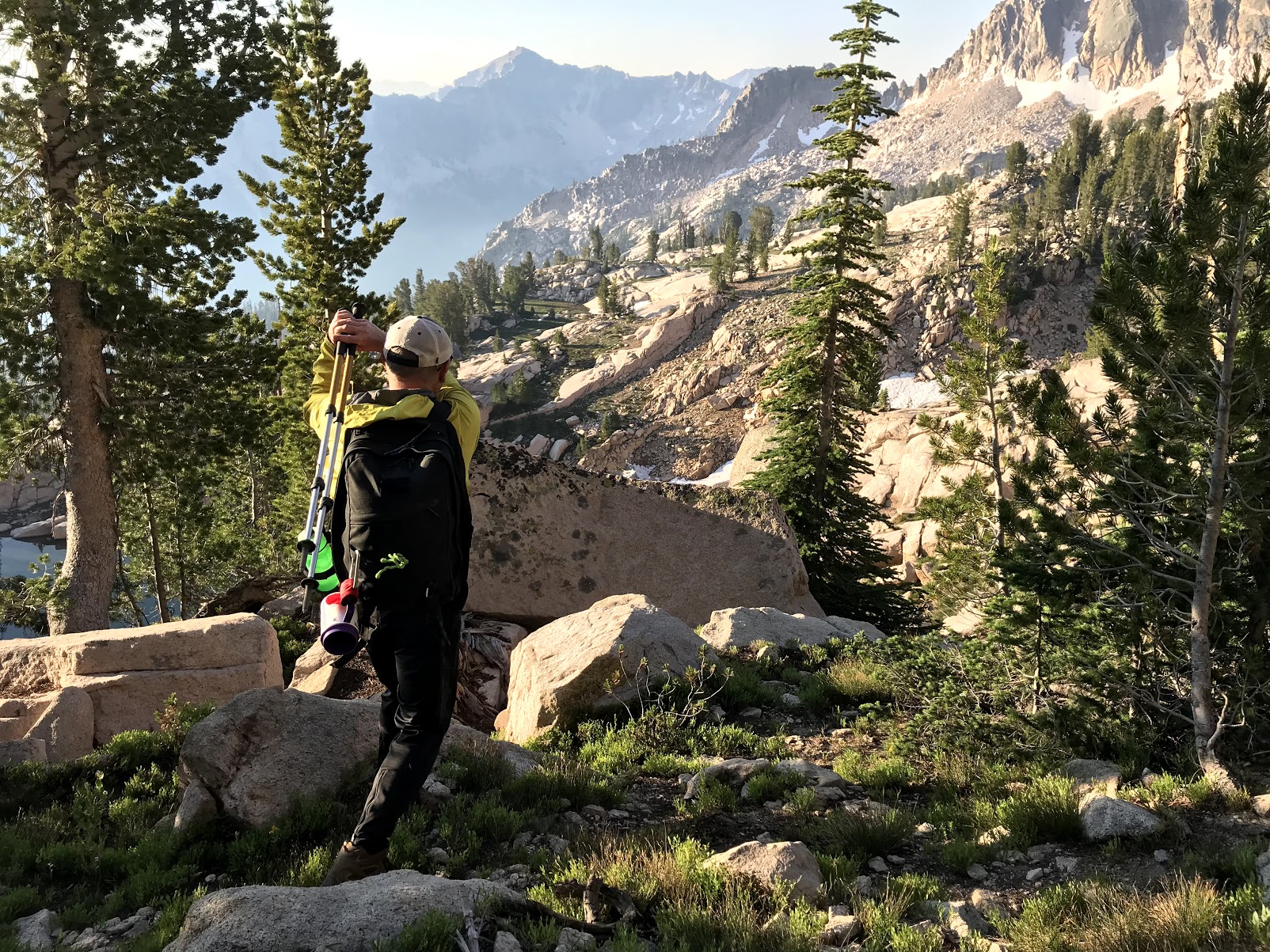 While meandering around on the Top of the Deck.  I established it would make for a great golf course with only Par 5’s and 3’s.

Sara, Chris and I went up to the area where we had originally intended to descend to Profile Lake and then up to the summit of Mt. Cramer.  We quickly reaffirmed our decision was correct.  The route were steep, narrow and full of lose rocks and boulders.  Looking at my maps also confirmed each of the two possible routes had significant portions where the pitch was over 60 degrees.

Our updated plan for this last day is a 9 mile and 4,000 vertical descent to the Sawtooth Valley.  Luckily we had time for a swim in the lake at base camp before packing up.  A nice surprise presented itself at the trail-head.  Sara had placed some adult beverages in Hell Roaring Creek.  I consumed one while taking a bath in the creek.

4 Replies to “An Encounter With The Finger of Fate”