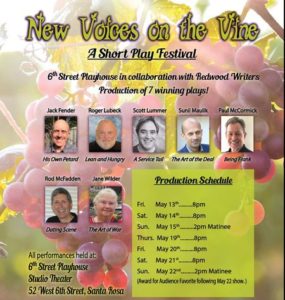 Is there an opportunity being presented?  If so, should it be acted upon?  And if acted upon, what will be the implication?

Roger Lubeck’s One Act Play – Lean and Hungry – currently showing at the Sixth Street Playhouse in Santa Rosa, California is a Tac sharp offering. The combination of dialog, staging and acting successfully draw the viewer right into the the middle of the situation.

A man (Rusty Thompson as He) and a woman (Crystal Carpenter as She) who are connected through a third-party (the woman’s boyfriend) have shared a week of interaction together with the boyfriend away on travel.  Lean and Hungry has us join the interaction on the night before the boyfriend’s return.  He and She are attempting to establish answers to the first two questions.  The combination of natural dialog, body language and eye movement makes Lean and Hungry an engaging if not totally engrossing endeavor.

He and She work each other and the situation as if they are seasoned politicians or professional boxers – saying things that can easily be interpreted as meaning something or nothing at all.

While watching Leaning and Hungry I wanted to blurt out a number of things to He and She as expert advise.  Phrases such as “you two are playing with fire”, “there is Trouble in River City get out while you are alive”, “stop right now this is going to end badly”, “go for it right now and who cares about the boyfriend I bet he is a jerk.”

While He and She are circling around the first two questions (through some obviously good direction from Beulah Vega), I occasionally move to and from thoughts about answers to the third question.  It was exciting and exhausting just like Lean and Hungry.  And then just as in life – poof – all gone.  Wait… what did they really decide to do? Was that real or just in my mind?

Lean and Hungry leaves the answers to the three questions up to the viewer and their imagination or does it?  Perfect!