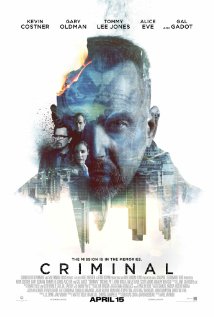 Surely, a film with the poorest of screenplays and direction can be overcome and saved by a male cast of Tommy Lee Jones, Kevin Kostner, Gary Oldmann, and Ryan Reynolds and bookend by Gal Godot and Antje Traue as the female leads.  Surely!

Well… no they cannot and don’t call me Shirley.

Criminal is as bad a (professionally funded mainstream) movie as has been put into distribution in recent memory.  The title of the film is highly appropriate but for unintended reasons – for what it forces the viewer to endure.  There is almost nothing in Criminal that is worthy of our time and dollars – except the child.  And we should all feel bad for little Lara DeCaro as she will have to live the rest of her life knowing people can tie her back to acting in this film.

Another title for this film could have been Bad Derivative.  Criminal utilizes (to new lows) the lamest components from the worst of the poorly produced Hollywood Knockoff films. For example, the good ole’ Operation Room: it is filled with 6.47 million high definition screens and the same number of staff who are led every view minutes by Gary Oldman’s character walking in and shouting “Okay people listen up.”  As you have come to expect, the 6.47 million high definition screens and staff are able to track everything real-time – I mean everything.  I swear that on one of the screens The Bad Guy is throwing out the Opening Day pitch for The Chicago Cubs before returning to his secret lair.  Oh, wait a moment, I have to stand corrected. The screens and the trackers always seem to miss things of actual importance – not because the technology and people fail – but because of the huge gap in the plot that is so obvious it can be seen from outer-space.