The river mouth has a bit of history tied to it.  The beach on the north side of the river, is where Captain James Cook becomes the first European to land on the Hawaiian islands (1/20/1778).  The Center Eyewall of Hawaii’s worst Hurricane in recorded history – Iniki – slams into Kauai at the mouth of the Waimea (9/11/1992).  The peak sustained winds are 160 MPH.  The Pacific Missile Firing Range (PMFR) operation on Makaha ridge records peak winds of 217MPH.  The device has not been calibrated recently, so the measure is not official.

On this day, rains provide a soaking to the south and west side of the Island.  Later on this day, the wood in the photo above is entirely underwater at 5PM.

—Jeff’s Thoughts and other Worthless Trivia —

Our home is located on the beach three houses north (or west) of the Waimea River.  With Weather and surf, the conditions can change dramatically and quickly.  I am constantly looking to see what is going on at the mouth of the river.

The top of the Waimea River Canyon rises 5,000 + feet above sea-level in less than 20 air miles. It often receives the most rain on earth in any given year (460 inches on average).  The combination of conditions is remarkable.  Therefore, Flash Floods can be an issue for the town of Waimea and at the mouth of the Waimea River. Flooding is a major problem in the area prior to the 1970’s.  The town floods to 4-8 feet in height in 1949 and again in 1975.

However, the Federal Government changes laws and funding.  In the 1980’s the Waimea River Flood Plan receives material protection.  Ironically, the Army Corps Engineers Recommendation of Plan A (i.e. greatest protection) is adopted, funded, implemented, and completed in 1984. So flooding in the town of Waimea and at the house would require an major, major event – such as another Iniki.

This does not mean water levels cannot change quickly and to dangerous levels. Especially, if you are on or in the river.  Linda and I experienced the greatest change to streamflow in any three-hour period first-hand.

During a winter storm on March 18, 2020 the streamflow increases from 69 ft. 3/s to 1240 ft. 3/s between 3AM and 6AM.  While the flood control works as planned, the change in streamflow is as large as has been ever recorded. 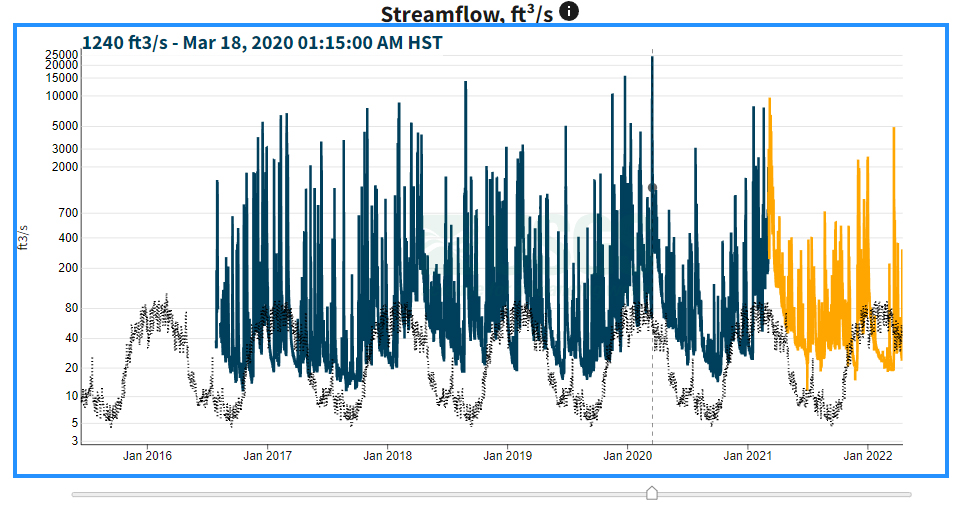 In 2022, for the most part, we have the photographic gear and the tools.  For the scenario above, I have all that is needed.  I either get this shot, or I do not.  It is up to me to make this happen. If there is a miss – look to the photographer.

If I hit the shot Dead-On, the result from the PHASEONE is the winner 10 out of 10 times.  16 Bit Color, and 151 Mega Pixels can make you look so very good.  However, lets not get too carried away.  At 20 Frames Per Second and 14 Bit Color, I get the shot with the Nikon Z9 that is very well not realized with the PHASEONE.

I am fortunate.  I desire to have the very best in 35MM and 4×5 equipment as my photographic kits.  Today that means Nikon Mirrorless Z and PHASEONE.