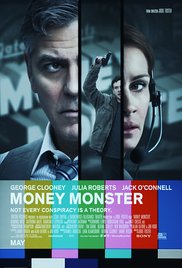 A movie with George Clooney and Julia Roberts as the principle actors is certain to please on some basic front.  Clooney and Roberts star in Money Monster and they deliver with a natural chemistry that would be expected given they have been friends outside of work for 15 years, and have worked together successfully on four films (Oceans series and Confessions of A Dangerous Mind).

Roberts and Clooney are spot on in good roles – highly believable. Jack O’Connell (Unbroken) playing the bad-guy and victim is additive to the good performance in a good role status for Money Monster.

As for the rest of Money Monster; good actors playing pretty typical roles working with a substandard script. You will easily recognize Dominic West (Hannibal Rising, 300, 28 Days), Caitriona Balfe (Super 8, Outlander), Giancarlo Esposito (Fresh, The Usual Suspects) and Christopher Denham (Argo, Shutter Island).  These are good actors. Unfortunately their actions and lines feel as if screenwriters used something such as AutoPilotScript for the the iPhone to complete the remainder of the screenplay.

Money Monster is not certain money or a monster film.  However it is a decent feature film, and if you have a scheduled date night or the extra time will be worth a trip to the movie theater.