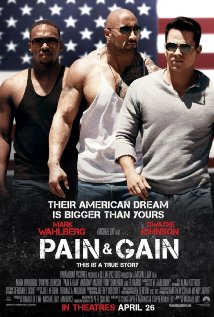 Pain & Gain is a hilarious, crass and silly movie.  The storyline is beyond belief and the costumes and props will cause you to blush. If you are familiar with the Three Stooges two-reelers of the 30’s and 40’s, Pain & Gain makes Larry, Moe and Curly look intelligent and their props logical.  Pain & Gain presents characters beyond what my favorite Stupid Criminal/Michigan/Florida storyline novelist’s Elmore Leonard or Carl Hiaasen would ask us to believe.  However the story and characters are true and what is depicted in the movie is pretty faithful to the facts in about 8 out of 10 cases.  Yes, there are embellishments and a composite character here and there, but the rest is true to life.  I am still shaking my head.  However, if you can check your Art-House standards at the theatre door (as I did), you will laugh continuously even while being completely embarrassed by the subject and event displayed before your eyes.