Buried deep in the Bitteroot Mountains in the State of Idaho of the United States is the Selway River.  The Selway, who’s headwaters are located near the Continental Divide on the Idaho Montana border, is not only special – but unique.  It is the only river to be included in the National Wilderness Act of 1964 and the National Wild and Scenic Rivers Act of 1968.  Only eight rivers were originally designated in the 1968 act. 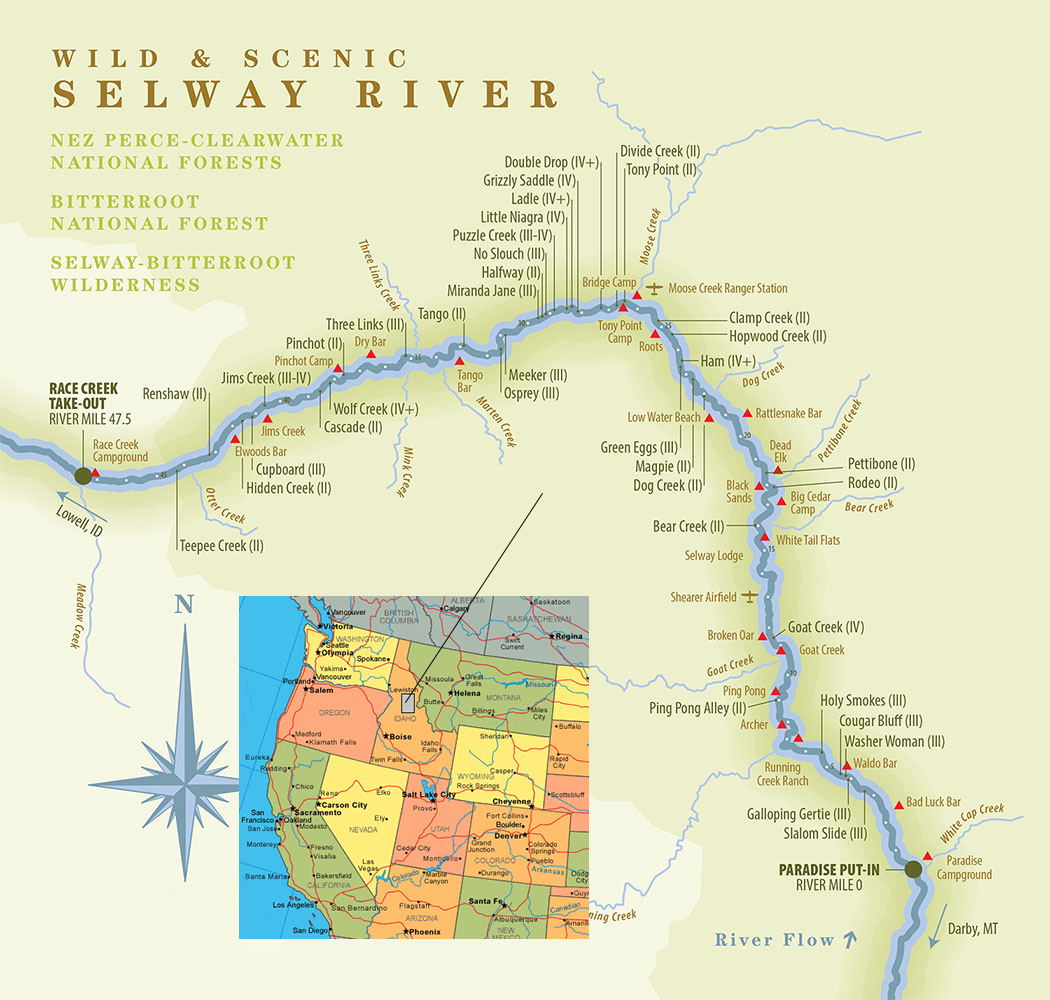 The Selway is 100 miles in length and is surrounded by the Selway-Bitteroot National Wilderness. the Selway River can be floated for 47.5 miles – from the Paradise Put In to the Race Creek Take Out just above Selway Falls.

Protection of the Selway in its natural state is further secured by the limitation of access. Only four permits to commercial river operators are granted.  The permit period to float the river is from May 15th to July 31st with only one single launch per day allowed.  In short, the four permit holders get four trips a year on the river.  The trips are four to six days in length.

Floating the Selway River often requires booking the trip a year in advance. One permit holder – Selway River Adventures  (SRA) –  invited me to float the Selway in July of 2020.

SRA is owned by four individuals who exude passion and dedication to the beauty and celebration of the backcountry of the United States.  On this trip two of the owners – Doug Proctor and Lloyd Lamb – act as River Guides – operating under the leadership of Head Guide Andy.

SRA’s approach is to provide a professional yet casual environment that lets you enjoy each aspect of the trip to its fullest.

From safety to what is on the menu for dinner, SRA goes to great ends to make everything easy to understand, follow, and enjoy.

This trip is five days in length with 10 guests and six guides.  There is an orientation on Saturday night in Hamilton Montana, with the float occurring between Sunday AM and Thursday PM.  A two night layover occurs at Moose Creek.  The Sunday and Thursday portions include a two to three hour bus ride to/from the Selway River and Hamilton Montana.

From a planning perspective, all you need to bring are clothes, toiletries, any favorite type of beverage, and special gear (e.g., fly fishing). You will need to cover the room charge in Hamilton.  Otherwise, the fee for the trip covers everything else.

So How Does the Selway Rate?

Using the International scale of river difficulty measures, the Selway in its 47 mile route has the following classifications:

From a time management perspective the float trip feels more leisurely than others.  This is accomplished because Andy and the other SRA River Guides are quietly paying attention to everything that is occurring (or not).  On-The-River, Breakfast, lunch, dinner, and personal time (for fishing or hiking) all happen at a pace that seems remarkably natural.

We hit the river each day starting at 10 AM.  We get off the river between 3PM and 4PM each day – except for the last.  During the float you are likely to sight Bald Eagle, Osprey,  bear, deer, elk, moose, the fish you wish to catch and rattle snakes.  All seem to be in their element and, hopefully – you are the quiet non-intrusive observer.

Andy informs us during the orientation that the river is running at 3.5 feet (deep).  He believes this is ideal in terms of White-Water rafting.  In short, the river is flowing with great pace and the additional obstacles that hurt a run during a low water will not be in play.

Two Days of Getting Ready for the Show

The first two days on the Selway provide everyone time to get oriented and comfortable with the river and the group on the trip.  The scenery is spectacular, the food superb, and the rapids and rocks offer a bit of challenge and excitement.

At the end of day two there is a two night layover at the mouth of Moose Creek (about 25 miles downstream from the Paradise Put In).  There are two campsites available – one above the creek and one below. The junction of the Selway River and Moose offers a variety of non rafting experiences – hiking, fishing, a historic backcountry airfield and ranger station, time to read from the SRA Library of books and articles brought on the trip, and the ability to do nothing at all.

Nestled – I use that term loosely – in the Selway-Bitteroot Wilderness is the Moose Creek Airfield.  Oh, the history of this place!  The airfield started in 1920 as part of the fledgling U.S. Forest Service.  Just prior to 1930 the USFS began using Moose Creek Airfield as the base of operation to prove out the concept of jumping out of planes using parachutes as a means to drop personnel and equipment into forest fires. In the 1930’s Moose Creek expanded to two runways. Leaving Moose Creek Airfield on July 12th 1940, Rufus Robinson and Earl Cooley became the first persons parachute into a forest fire (Marten Creek) and successfully land with equipment.

The airfield is open to the public.  The Ranger Station is manned by one-person from April to November.  The runways are maintained by mules pulling mowers as only manual equipment is allowed in the Wilderness.

The fourth day offers six rapids Class IV or IV+ mixed with eight others.  In short this is a big day in some big water.  Given the approach and execution by the SRA Guides, all 10 members on the trip appear to be nothing short of ready for a day of fun and enjoyment.

The Last day, The Take Out and Heading Home

The fifth and final day involves one-half day of floating, exiting the river at the Race Creek Take Out and the bus ride home.  As you head toward US Highway, the bus stops such that you can see Selway Falls which is classified as a Class 6 rapid.  The bus reaches the hotel in Hamilton at 4:30 PM.

The World Is Small

On the third day at the Moose Creek Guard Station, we are discussing other experiences amongst the group.  I mention another water related story that involves the Puget Sound, my boat, Nuclear submarines on the Hood Canal. my friend since childhood at my side and Navy SP’s racing in a skiff towards and then boarding my boat.  Why?  We had drifted into restricted space and were looking at the very awesome subs with large binoculars.  In the telling of the story I mention my childhood friends name; Mike Andary.

As we head back to the river, one of the group – Glenn a doctor from Missoula – asks me if my friend is Dr. Mike Andary of Michigan State University.  Over the next 15 minutes a litany of direct and indirect connections are established.

You can run but you cannot hide!

18 Replies to “Secluded, Seductive, and Stunning – The Selway River”