I stand on a spot where America’s longest highway (U.S. 20 at 3,365 miles)  and what once were The Oregon Trail (at 2,170 miles) and The Oregon Short Line of the Union Pacific Railroad sit in view of each.  And if all were operating on this day, I am likely standing at a point where they cross paths. 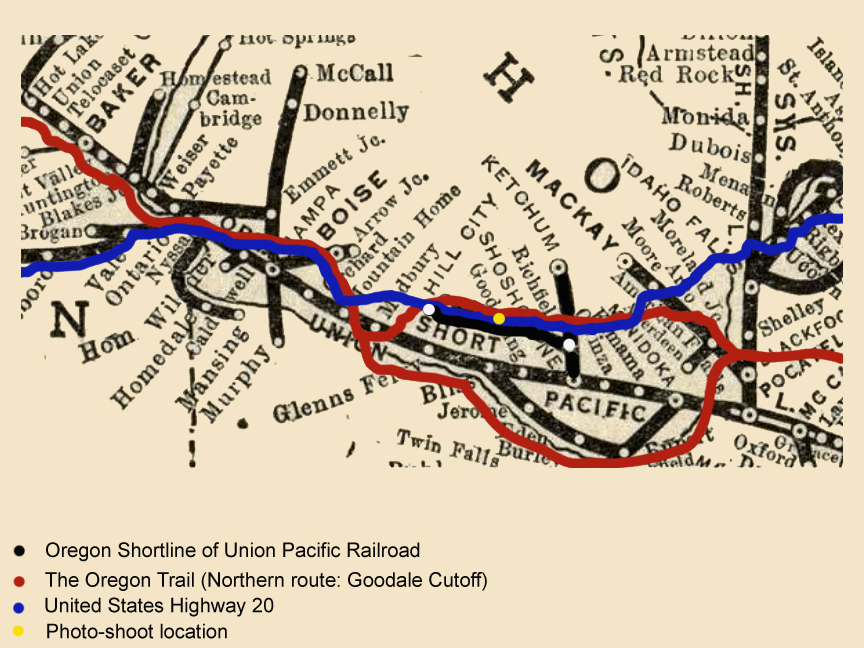 The last 150 years has brought a tremendous amount of change, hope, prosperity and demise when it comes to transportation and the ability to migrate let alone travel for pleasure or commercial reason.

Perhaps this spot represents this enormous and speedy change better than any.  In less than 200 hundred years it transformed from being untrammeled by the White Man to acting as the principal route for trappers, and playing the same for the most significant emigrant migration our country has experienced.  Soon thereafter it would play a major role in connecting the continent via railroad followed by the U.S. Highway system.

Each of these phases brought tremendous hope for change and prosperity.  They were conducted under great risk both financially and often involved life and death.

Making a living on this spot was difficult if not impossible and remains elusive to this day.  But make no mistake, it was critical in its role as a connecting point.

In 1982 I travelled past this spot for the first-time.  It was so isolated, remote, and subject to extreme weather conditions, that locals highly recommended travel should always include tools, clothes, food and water for survival upon being stranded.  I heeded that advice. In that same year, the tracks from the railroad began to be removed.  On this spot, the tracks were removed from where it crossed the highway.

I travel over this spot on days when the thermometer reaches anywhere from 103 degrees Fahrenheit to -49.

I cannot place the exact year – my best guess is the late 1980’s – this spot started performing its role as the resting spot for vehicles and machines.  While I cannot say for certain these vehicles and machines serve no purpose and or have no value – it would be fair to say they are long past their prime.

Why not a commercial operation or a formal junkyard, the collection has grown substantially over the years.

Each time I drive by this spot, I look for new additions.  I always always pick one vehicle or machine and ponder about it during its operational prime.  I ponder about the hopes and dreams of the people who operated them or whom benefited from their service.

On this bright sunny spring morning I decided to visit this spot and its occupants.

So what about you?  Is there a spot for which you pass by on a regular basis that suggests history and or an intriguing backstory you have yet to investigate?  Is there a spot in which you have?  If have not.  Take the time to stop the next time you pass by.  I would love to learn your story from either situation.

One Reply to “A Spot Once A Connecting Point for Hope and Promise – Now the Resting Place for its remnants.”