Authors Note: Linda and took an 18 day trip to Spain.  It was not part of a professional photo-shoot. I carried only an IPhone and the Sony RXR1 as photographic gear.  It was agreed, as with most vacation trips we take, the photos would be captured as Tourist shots.

Sevilla is the Capital and largest largest city in the autonomous region of Andalusia in the country of Spain (685K city proper 1.5M metro). Sevilla is a special place.  Sevilla is old (founded 2,200 years ago) and it is new (hosting the World Expo in 1992).

As with many European cities. Sevilla is a walking town, and Linda and I are walking people. Linda and I stayed six nights in a wonderful home in the center of town (Triana).  The home was completed this year (2022) using a centuries old building that was gutted. We had easy access to museums, places of historical note, Flamenco shows and other terrific local establishments.

The big tourist spots (The river-front, Alcázar, Sevilla Cathedral, Barrio Santa Cruz, Archivo, General de Indias, and Hotel Alfonso XIII) are worth every moment of your time. We really like the fact we could walk from our home in the Triana District to these areas of interest.  It allowed Linda and I to learn a great deal about Sevilla and its residents.

While we visited, the Sevilla Film Festival was in full swing.  The Lubeck’s cannot pass up seeing a movie.

If the town looks familiar, there may be another reason.  Sevilla was used extensively in the series Game of Thrones.  Also Sevilla doubled as Cairo in Lawrence of Arabia (arguably my favorite film).

Since the age of five, I have dreamed of standing in the location set as the British Officer’s Club (Hotel Alfonso XIII atrium and parlor) where Lawrence demands a Lemonade for he and his companion who accompanied him across the desert.

Present day Sevilla has kept, respected, and integrated different cultures, religions and architectural styles.  Today its population is young and vibrant.  The city center (including Old-Town and Triana) are alive from mid morning to early afternoon and then again from mid evening to early morning.  While the river-front and big plaza’s are great, it is the endless narrow side streets and pedestrian walkways in Old-Town and Triana that separate Sevilla from just about any city I have visited.

Author James Mitchener may have characterized Sevilla best, “Sevilla doesn’t have ambiance, it is ambiance.” 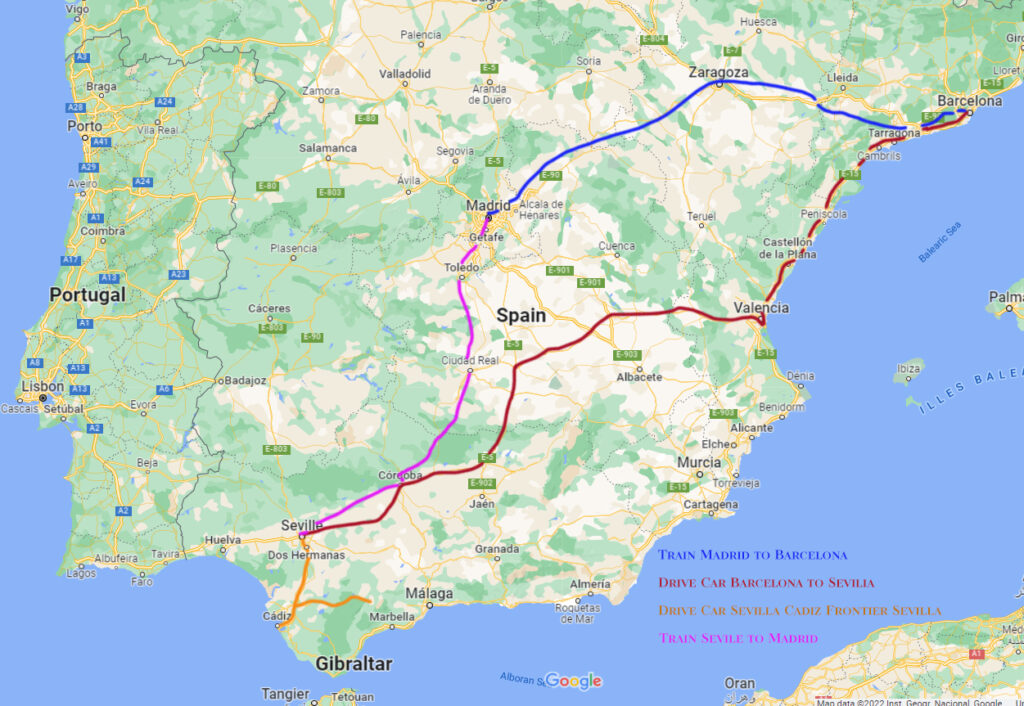 Linda and I are members of HomeExchange.  It is an organization of home owners who trade staying at each other’s home.  Linda and I have been members since HomeExchange’s inception in the 1990’s.  We exchanged with Manel & Pepa in Sevilla. Manel and Pepa’s home was terrific.  In my mind, staying in someone’s home is vastly superior to that of a hotel. The HE ground rule is no money is exchanged between the Members. Home Exchange verifies (prior to getting a membership), people are who they say they are, the home is real, and they own it.

As with many of the European countries, the operating aspect of daily life is distinctly different than the United States.  The day in Sevilla, does not really begin in earnest until 10AM.  Some shops (Coffee, Bakery, etc.) will open at 8AM.  They are few and far between.  Most operations close down for a few hours starting at 2PM and re-open at 5PM.  Most restaurants if open during the daytime will close at 2PM and re-open at 8PM.  Nightlife continues well into the morning hours.

Sevilla has an extensive rail, Trolley, bus, and cab system.  We walked, but if any of these transportation options are needed or desired – they were close by and readily available at all hours.  A car is not needed to enjoy central Sevilla.