Idaho has much to offer, including U.S. Forest Service (USFS) Roads. While sometimes challenging to travel, USFS Roads can offer exceptional views.

USFS Road 669 is one such example.  USFS #669 reaches 10,433 feet above sea-level.  It is the 8th highest road (of any kind of surface) that can be reached by a 4 wheel-drive or passenger vehicle in the United States.

The road that reaches the highest elevation in the United States is White Mountain Peak Road in California at 14,252 above sea level.  However, a locked gate at 11,360 feet above sea level blocks travel to the public.  The highest paved road is Mt Evans (14,132) in Colorado.  This road is open to the public between Memorial Day and Labor Day.  Pikes Peak Road (14,115) is the 2nd highest paved road.  It is a Toll Road.  I drove to the summit of Pikes Peak in the 1980’s when it was unpaved and had no Toll Fee.

USFS #669 is not paved, restricted by locked gates, possess no formal open and closing dates and does not charge a Toll Fee for access.  USFS #669 should be characterized as a Road using the loosest of terms.  USFS #669 gains 3,212 vertical feet in slightly less than 4 miles distance. So yes, it is steep – and really, really steep in places.  It is not a road to travel using a traditional passenger, SUV, or 4 wheel-drive low-clearance vehicle. The road is narrow and possesses few turnouts. This is not a road to travel in bad weather.

However, the roadbed of USFS #669 is exceptionally well built and straight-forward to negotiate.  If you know what you are doing and have a capable vehicle, USFS #669 is actually a ton of fun to drive – with the views at the summit being as good as it gets.

Railroad Ridge Summit sits about 35 air miles from my cabin in Stanley Idaho.  Given the mountainous nature of the area I must travel 75+ miles to reach it.  The trip involves traveling east on Highway 75 about 43 miles along the Salmon River to the point where the East Fork of the Salmon River empties into the Main Salmon River. This section includes a descent of 1,400+ vertical feet – to an elevation of 5,344 feet above sea level.

To reach the Railroad Ridge Summit from the junction of Idaho 75 and East Fork of the Salmon River Road (East Fork Road) I will travel about 30 miles and gain 5,100+ vertical feet of elevation.  The trip includes travelling along the eastern edge of the White Cloud Mountain Range and slowly working my way back (west) towards Stanley into the heart of the White Clouds.

This section includes about 20 miles of travel south and then east on East Fork Road, followed by six miles on the dirt and gravel oriented Big Boulder Creek Road (USFS #677) and then up USFS #669 from the site of the abandoned Livingston Mill.

East Fork Road is an interesting drive to me. The area feels stark and isolated, with a smattering of ranches, homes, mobile homes, Motor Homes on cement pad , and what could best be described as other types of dwellings providing habitation for humans. While technically not off the grid, it sure feels like it.

Because it is on the eastern side of effectively two mountain ranges this area is in the rain shadow so-to-speak. The landscape looks much like Nevada, eastern California or eastern Oregon. 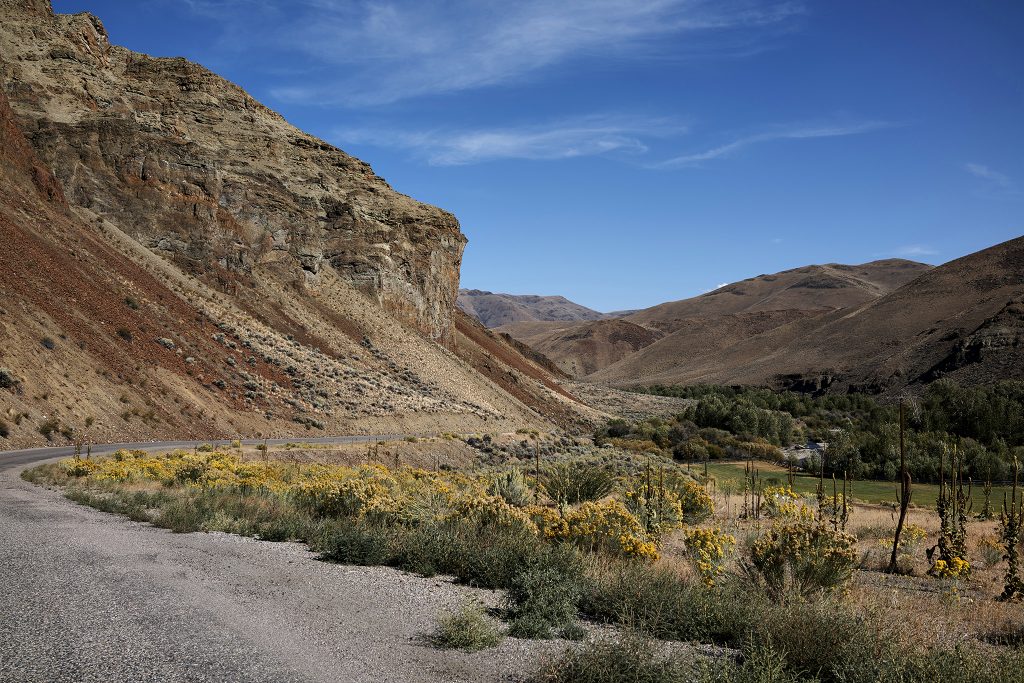 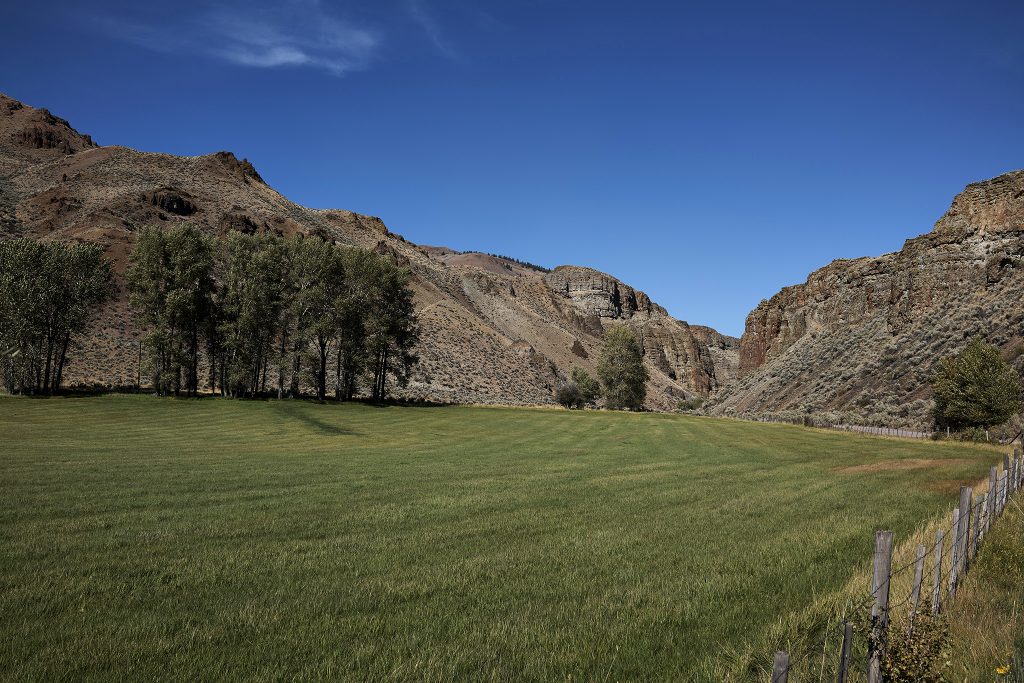 When encountering people of the area, they appear to be guarded almost leary but never mean spirited or confrontational,.

The Livingston Mine was first discovered and established in July of 1882 by A.S. and W.S. Livingston.  The Livingston and Little Livingston mines operated under one ownership.  The claim and operation have been held by 10 different people\organizations.  The claim is technically still active and ownership is held by the Swanson family of Idaho Falls – who purchased it in 1960 out of bankruptcy.  The mine has not been active since the late 1950’s and all buildings and infrastructure have been abandoned.

With the creation of the Sawtooth National Recreation Area in 1972, the site was eventually deemed hazardous (toxic) by the USFS. The site was cleaned up and reclaimed by the USFS in 2008.  The clean-up cost $1.2M in 2008 (as reported by the Idaho Mountain Express).

The Livingston Mine produced Gold, Silver, Copper, Lead, and Zinc totalling (by my estimates) $31,125,946 of revenue at today’s prices.  A 1997 study by Victoria Mitchell of the Idaho Geologic Survey estimates that $26,465,375 could be yielded from the remaining 50,000 tons of ore remaining in the mines at today’s prices. 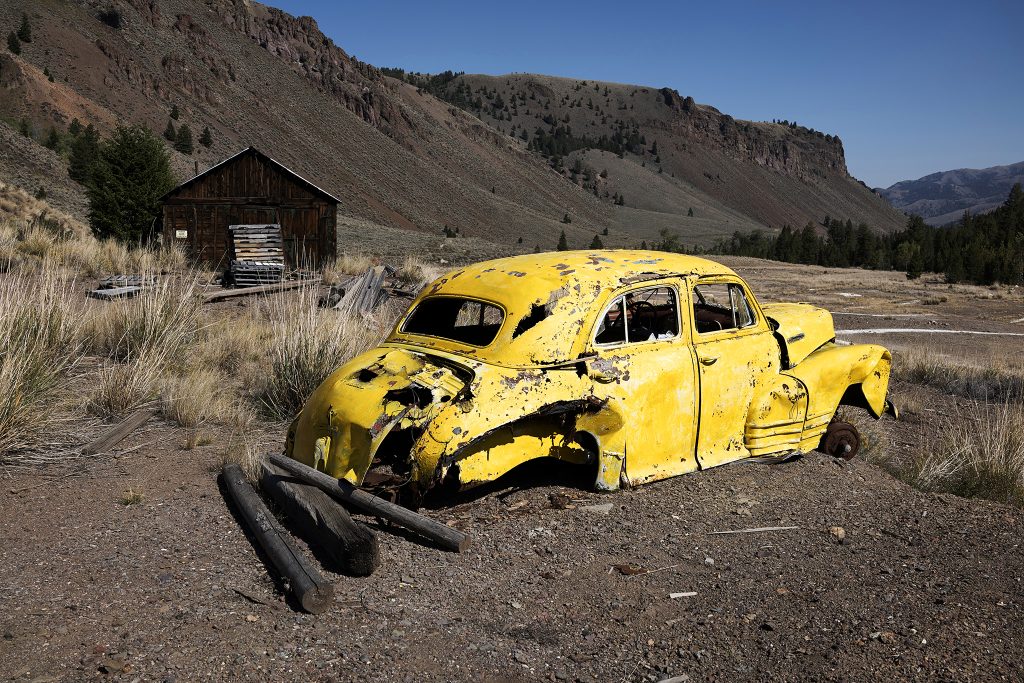 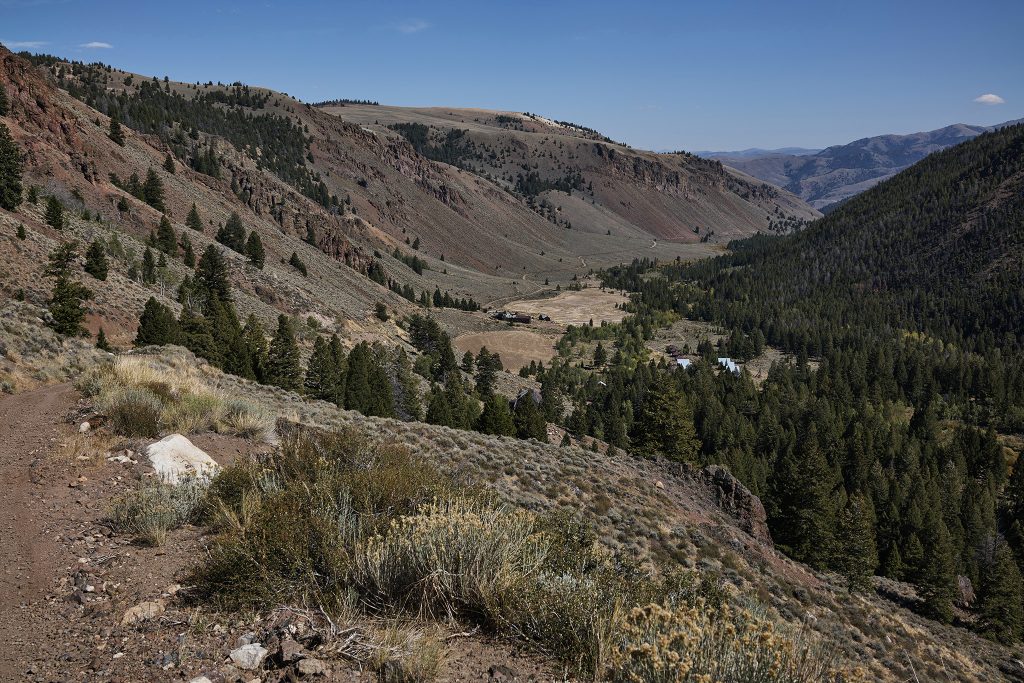 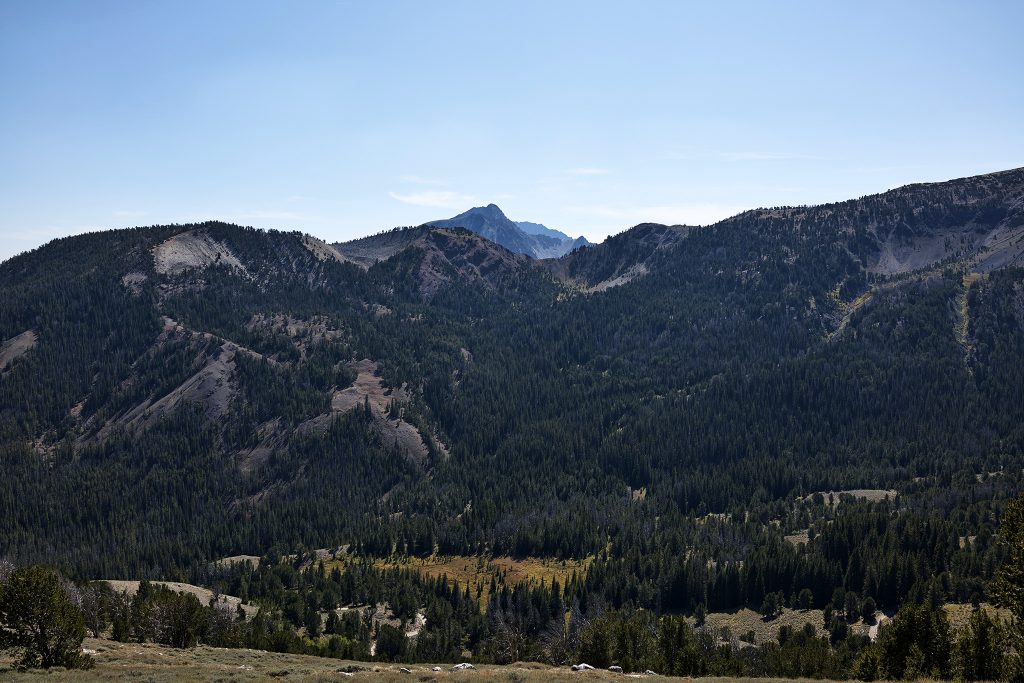 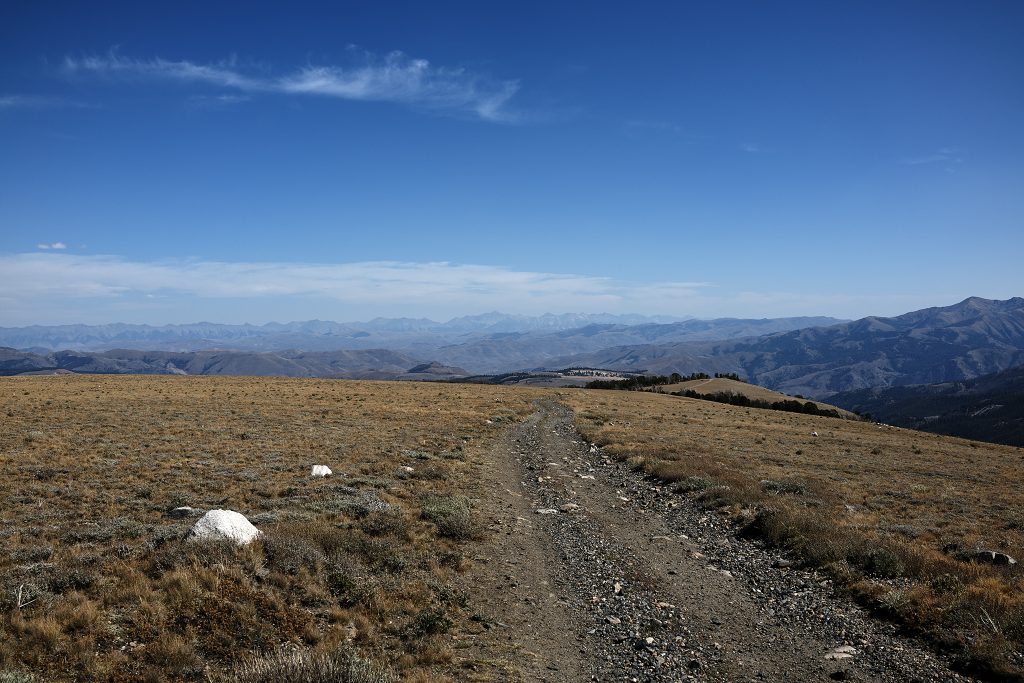 As I complete the last long steep section from Livingston Mill I see the top section of  Railroad Ridge. Given the terrain for the previous 3+ miles the top section feels super long and unbelievably level.  I have never experienced this kind of terrain 2 miles into the sky in Idaho.

As I move to the west, I look back to the east.  The Lost River Range and its eight peaks 12,000 + feet above sea-level is in full view. Borah (the tallest in Idaho) is dead center.  Leatherman (the 2nd tallest in Idaho) is just to the right.  I summited Borah in the 1980’s (via Chicken Out Ridge) and climbed Leatherman (via the Class IV+ Northern Route) in 2015. 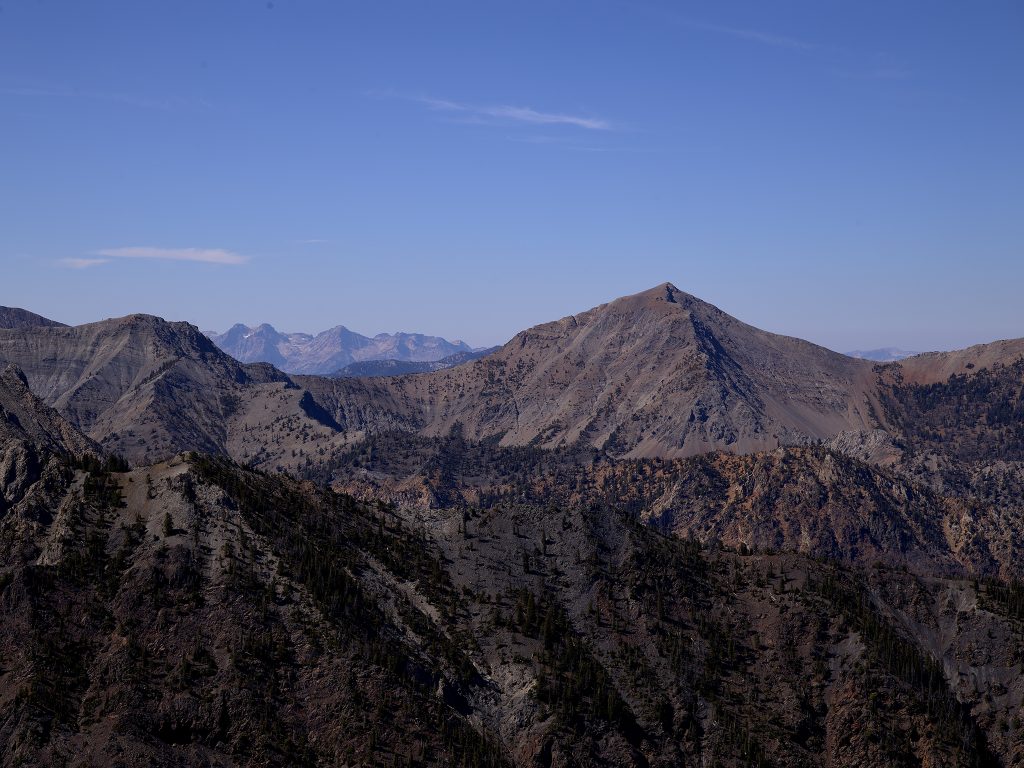 Looking west and jumping out right in front of me is Watson Peak as well as are the big unnamed peaks of the White Clouds (i.e., #4, #5, & #6). In the distance are some of the biggest peaks of the Sawtooths – Thompson Peak (tallest) at center, Williams Peak at right and Mickey’s spire at left.  I have had the pleasure climbing each of them in the past few years. My cabin in Goat Creek sits below them to the right.

To the southwest is the Chinese Wall and below it Crater Lake.   The knob on the far left is Peak 10,817.

What a series of views!

The goal in the coming weeks is to scamper (say it out-loud in the voice of Hockey Announcer Extraordinaire Doc Emmeric) to the top of Peak 10,817 and follow the long ridgeline to the southeast and photograph the Gunsight, Caulkins Peak, White Cloud Peak #10, Tin Cup Lake, and the Gunsight Creek Basin.

If weather and traversing the 10,000 – 11,000 ridgelines is possible (which look to be the case) I hope to capture D.O. Lee Peak and the numerous 11,000+ peaks surrounding the Big Horn and Big Boulder Creek drainages. 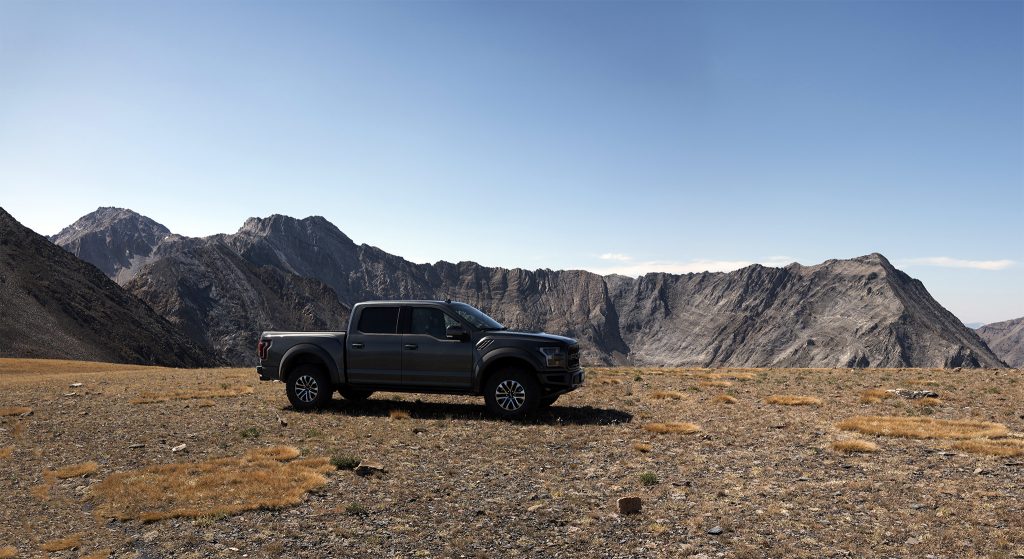 It should be noted I recently purchased a new rig and have been putting it through the paces.  Based on the marketing hype, my truck – a Ford Raptor – was designed and built exactly for the kind of terrain and challenges I encounter.  At this juncture it has performed flawlessly.

On this trip I was able to test – to the fullest – a new aspect of its operational capability (for 2019) – Trail Control. In short, think Off Trail Cruise Control (uphill and downhill).  As a point of reference this trip includes 3,212 feet vertical in slightly less than 4 miles (or 803 feet per mile).  I was able to go up and back down with rarely the need to touch the accelerator or brake throughout the ascent and descent in this section.  I focused on the steering and controlling speed with my finger tips.

To be perfectly honest, I was skeptical that this aspect would perform as advertised.  I did not think it would have a practical use in the terrain and environment in which I operated. As the great late Dom Deluise (in the role of a Hollywood Film Director in Blazing Saddles with a Megaphone) stated: WRONG!

One Reply to “Up to The Rooftop”