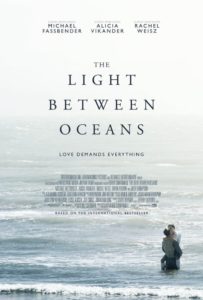 The film The Light Between Oceans could quickly and easily be classified as a tear-jerker Chick Flick sponsored by Kleenex brand tissues.  This characterization would be selling the film, its source novel, and its potential audience short, very short.  This is a story about making very… no.., extremely tough choices so as to benefit one that you love with a material risk to your own well being.

Yes, The Light Between Oceans could have been a costume-drama Hollywood executives chose to turn into a courtroom procedural or a thriller with car chases.  Car chases in the 1920’s in Australia are not as dramatic as in the 1960’s – 1980’s in San Francisco.

None-the-less The light Between Oceans is meant specifically for the brain and the heart to embrace and consume.

Ironically Jack Thompson and Bryan Brown two males leads of the 1980’s in Australian film (AAN Breaker Morant) are the key supporting characters in the film.  This is one of my favorite films.

Oh… then there is the music score by Andre Desplat (AA Grand Budapest Hotel, AAN The Imitation Game, AAN Argo), Cinema-photography by Adam Arkapaw (McFarland USA, Animal Kingdom) and costumes by Erin Benach (Drive, Lincoln Lawyer, Blue Valentine) These three aspects are worth seeing the film on their own.