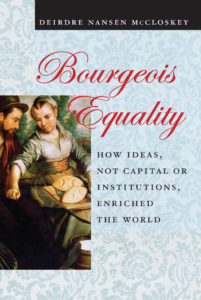 So you think jobs creation by government, closely held capital available for investment, the grace of benevolent institutions or a single person who states they will serve you well is what makes the world a great place?  No so says Deidre Nansen McCloskey the conservative economist – a key person in the Milton Freeman Chicago School of Economics way of thinking – in her book Bourgeois Equality.

You can read the 650 pages of text and 137 pages of notes in the third installment by McCloskey in this line of thinking – like I did.  However, the bottom-line is that McCloskey proffers that if people are afforded basic human dignity (which has been the norm since 1840-ish) their insatiable appetite to better things (i.e., Betterment) is what has led to a 30-100 times improvement in quality of life.  It is the desire to improve (i.e., quicker, better, faster) that has allowed us to live a life with a remarkable standard of living (and also to take virtually everything that is part of our daily life for granted).

McCloskey is bold and brash. She is willing to critique (often harshly) the hypothesis posited by every well known economist and theorist.  I would pat McCloskey on the back but her hand is already there.  None-the-less Bourgeois Equality is great reading for a geek like me.

My only question for McCloskey?  Then why haven’t the Cubs won the World Series since 1906?