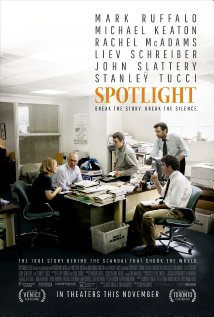 In the business world, people often think the problem they are solving ends up merely being a symptom of a bigger one.  In news reporting, what many believe is the story ends up being part of a much bigger topic.  In both cases, the participants often challenge, deny, undermine, and even attempt to block the truth of the matter from being made public.  The bigger the problem the bigger the implication of dealing (or not) with the issue at-hand.

At first glance the film Spotlight appears to be the story of the Boston Globe, its Spotlight investigative reporting team, and how they identified, and reported on a horrific scandal involving the Catholic Church.  Actor, Director and Writer Tom McCarthy (co-written with Josh Singer) guides the film with a level of expertise rarely found in films that claim to be based on a true story or real events. With 38 screen credits McCarthy is a popular supporting actor (Meet the Parents, Good Night Good Luck, Flags of Our Fathers). However with Spotlight, McCarthy (Station Agent, The Visitor, Win Win, AAN Up) demonstrates that he is burgeoning star when it comes to screenwriting and directing.

Spotlight could easily be classified as a highly compelling procedural newsroom drama.  To do so would be short-changing the film.  Spotlight presents to us in carefully crafted scenes the story is really about the strength, weakness, and corruption of humans and its organized institutions – all conducting themselves in the name of the greater good.  Instead of bonking the viewer over the head, Spotlight offers up its material and lets the viewer arrive at key conclusions in uncanny synchronization with the overall pace of the film.

In order to succeed and be fully believable, Spotlight needed strong performances by a dozen actors as it is not a single star vehicle.  It gets them.  Michael Keaton (Mr. Mom, Clean & Sober, Out of Sight) and Liev Schreiber (Ransom, A Walk on the Moon, The Hurricane) are especially effective.

Having been bred, born, raised and worked in the newspaper/commercial media industry for a good portion of my life, Spotlight feels incredibly real and accurate with only the slightest of creative license being applied.

I have lived through leading (as Associate Publisher) and then acting on the decision to report on and then investigate a story (involving death) that ultimately revealed a much bigger scandal.  Similar to a side-story of Spotlight, I had a Managing Editor (David Ledford), reporting staff and, other collaborators (Mary Hausch Managing Editor of the Las Vegas News-Review) get the story correct and out in print.