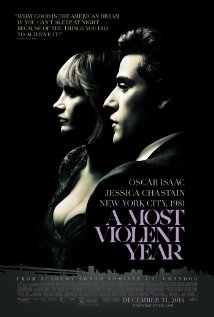 Oh the look… the look… Oscar Isaac gets the chance to display The Look in A Most Violent Year and by any measure he nails it.

You know The Look; Al Pacino in The Godfather, Robert DeNiro in Taxi Driver… that look… The Look.

A Most Violent Year pays it respects to the best films of the 70’s and early 80’s depicting New York and all its organized control (I did not say crime, I did not say crime). 1981 was the most violent year in NY NY history.  The film is not perfect, but is pretty close.

Oscar Isaac (The Bourne Legacy, Inside Llewyn Davis) is superb as the immigrant who is making good (actually really good) and unwilling to fall victim to violence or the wrong way.  Isaac is scary good in the role – just as good as Pacino and DeNiro were in their signature The Look movie opportunities.

Albert Brooks (Finding Nemo, Out of Sight), David Olyelowo (Selma, Jack Reacher) are excellent in support.  Jessica Chastain (The Help, Zero Dark Thirty) is good – because of her acting.  However she feels slightly mis-cast as a NY crime-boss’s daughter.

Note:  I could swear the movie set is using the Haitian Cotton sectional in their 1981 NY home, that Linda and I once possessed.  I am thinking of calling the Teamsters and getting them to slow down traffic on the bridges into NY as a protest. Oh… that has been done recently?