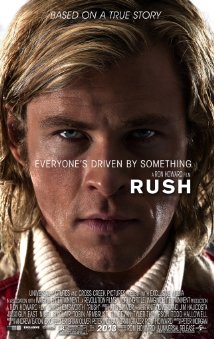 Rush the film from Ron Howard (AA: A Beautiful Mind, AAN: Frost Nixon, Apollo 13) tells the story of two men driven to be recognized as the very best in their profession attempting to accomplish the task from almost Polar opposite approaches. Where the film decides to focus its efforts, Rush is an all out winner.

The male leads Chris Hemsworth as James Hunt and Daniel Bruhl as Niki Lauda are superb in their roles.  Rush should provide ample evidence that Hemsworth (Thor, Avengers) does not need Comic book roles for his career to continue flourishing.  After watching the movie I find it hard to imagine anyone other than Bruhl (Inglorious Bastards, Bourne Ultimatum) playing the role of Lauda.

The sets, staging and cinematography in Rush are nothing short of superb.  For those who followed the sport in person and or on ABC Wild World of Sports in its Halcyon days during this period, Rush returns us to those times with little to no flaw.  The race cars down to the trophy presenters* are as I remember them.

Although on occasion Rush starts to learn on sentimental heavy-handedness, it is nonetheless a wonderful blend of spirit, action and tension

******Some Other Thoughts and Notes to consider reading after the viewing******

In 1976 the year Hunt took away Lauda’s title by one point, I was driving my shiny new Pontiac Formula 400 (F1 Red) thinking I was one of those racers.  what were you driver at the time?

Howard, uncharacteristically, did chose to leave one key aspect shallow – the women in their lives.  Although they are not treated completely as eye candy it could have been done much better.  As Marlene Lauda – the graceful and versatile Alexandra Maria Lara (The Tunnel, Downfall, The Reader) feels like as if she is a set piece. And then there is Olivia Wilde (Time, Tron, Butter) as Suzy Miller.  In real life Suzy Miller was a high profile model who temporarily stole Richard Burton from Liz Taylor, but the scenes with Wilde are pedestrian.

Seeing the film was willing to discuss the risks, display severe injury and reference death, I was a little disappointed, and highly curious that there was no mention of Mark Donohue in the film – especially given the films’ principle theatrical release is in the United States.  Donohue was the most decorated and versatile car racer in the world at this period of time.  He was a winner/champion on the Indy, NASCAR, Trans-AM, Can-AM and IROC circuits. Donahue in almost single-handed fashion took Porsche to the status of legend during this period.

Donohue came out of retirement at Roger Penske’s pleading to establish the Penske F1 team in late 1974.  1975 was to be Penske and Donohue’s year.  But it was the year of Lauda (1st F1 World title).  The Penske and Donohue team would struggle. In the 12th of the 14 Grand Prix races in 1975 (on Lauda’s home track in Austria) Niki would secure an insurmountable lead in points – effectively the Championship and Donohue would lose his life.

A few days before the start of the Austrian Grand Prix, Donohue set the world speed record (race track) in Florida – 221.30 MPH for one lap in a Porsche 917-30. A few days later, during a practice session on the Österreichring race track (Austrian Grand Prix course) Donohue’s car blew a tire on its most dangerous turn (Voëst-Hugel).  The car hurtled off the course.  A race official was killed by the vehicle as it crashed.  To everyone’s astonishment Donohue walked away without any apparent injury.  Later Donohue started to experience a headache, so as a precaution he was taken to a hospital for examination.  The next day Donohue would experience a cerebral hemorrhage, lapse into a coma and die.

Peter Morgan wrote this script without any contract or studio financing in place.  His wife Lila (an Austrian) suggested he talk with Lauda directly.  30 meetings later Morgan had a script with legitimacy in using Lauda’s voice as the focal point of the narrative.

The Cars and Their Drivers

Many of the scenes include our lead actors at the wheel in a speeding race car.  Insurance officials would not allow the actors to drive Formula 1 race cars, so the production crew placed Formula 1 shells over Formula 3 cars to all party’s satisfaction.

One of my very favorite film composers, eight time Academy Award Nominee Hans Zimmer (AA: The Lion King, AAN: Inception, AAN: The Thin Red Line, The Last Samurai) created the original music for Rush.  I find it to be a nice blend of Inception and The Last Samurai and matched beautifully to the film.

Anthony Dod Mantle (AA: Slum dog Millionaire, 28 Days Later, 127) is known for his ability to create visually a sumptuous image that operates in concert with high speed action scenes – when for many the action itself might carry the day.  Rush is no exception in Mantle’s ability to pull off both.

Why is it that the Trophy Presenters fail to notice me – then and now? It should be noted I got the best girl in the long run (just as long as I fill and empty the dishwasher).