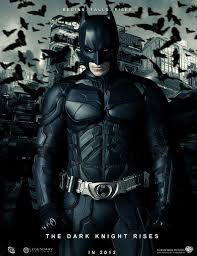 Dark Knight Rises, Christopher Nolan’s third Batman film is not typical of the DC Comic’s style currently smothering screens today in any way, shape or form.  Dark Knight Rises is a serious drama, laced with tidbits of clever humor, that starts out good and finishes with edge of your seat power for its last 90 minutes.  Dark Knight is dark, but not depressing, in that the subjects and dilemma are onerous and relevant to the fears of today instead of some implausible comic book problem (e.g, The Penguin wants to move all Icebergs to Gotham and freeze the city).  There is a strong-will and sense of purpose integrated into the storyline and character actions that is powerful and builds as the film moves to conclusion.

The Dark Knight Rises employs the Nolan “A” team of actors and staff.  The Dark Knight Rises uses all of its 164 minute run-time to enhance the storyline and integrate a bevy of strong supporting characters.  Anne Hathaway, Marion Cotilliard and Joseph Gordon-Levitt are particularly strong in their roles. It also means the cinematography is in the capable hands of Wally Pfister, music by the superb Hans Zimmer, editing by Lee Smith, production design by Nathan Cowley and Kevin Kavanaugh, and costumes by Lindy Hemming. All of these people are Academy Award winners, at the top of their game and have worked together with Nolan on previous films.

The chief villian, Bane as played by Nolan regular Thomas Hardy, who has beefed up become comprehension, does not have the dynamics of previous characters in this Batman incarnation.  However, the reason for such will become obvious.

Despite 254 people credited with some type of role in visual or special effects, Batman is anchored by terrific live action and set production values instead of computer generated imaging (CGI).  The result is Dark Night is easy on the eyes.