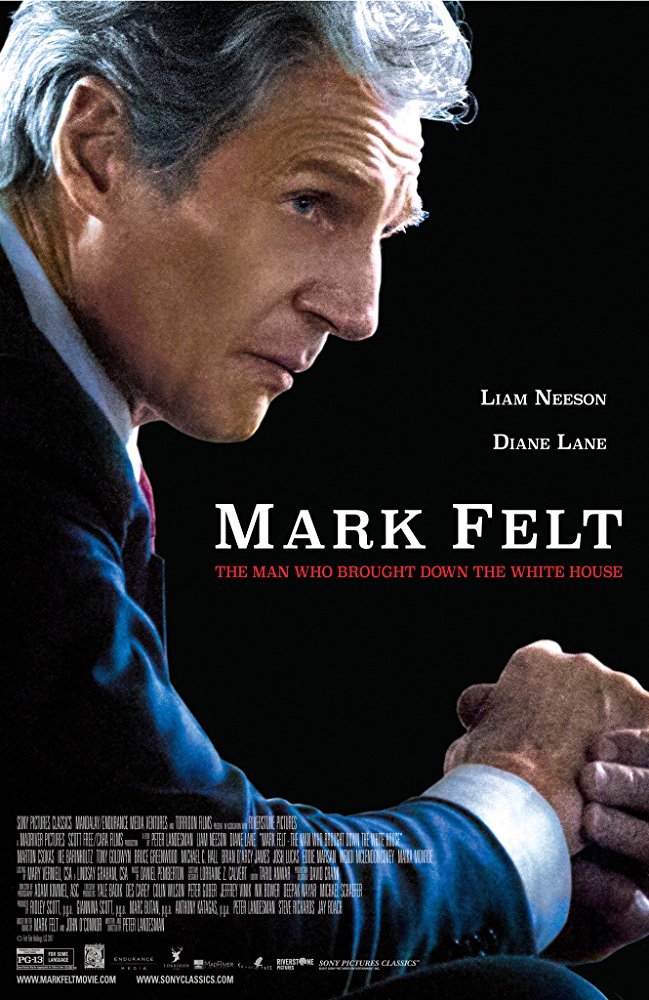 Mark Felt – The Man Who Brought The White House Down is an intriguing film that looks into a big piece of U.S. history from the vantage point of Mark Felt.   And why is the name Mark Felt important?  Mark Felt was the Assistant Director of the Federal Bureau of Investigation (F.B.I.) who 30 years after the fact admitted he was “Deep Throat” in the Watergate affair. Mark Felt is Written and Directed by Peter Landesman (Concussion).  And similar to Concussion, Mark Felt moves smoothly, steadily, and what appears to be honestly through its 103 minute run-time.  However, remember Mark Felt is a Biographical Drama, not a documentary.

Liam Neeson plays the lead role of Mark Felt and Marton Csokas (The Equalizer, The Debt) plays the role of Acting Director of the F.B.I. L. Patrick Gray.  Both are superb in their roles and reason alone to see the film.  Diane Lane (Secretariat, Unfaithful) plays Audrey Felt with high-level level of faithfulness to what his known about her character.  The supporting cast of Mark Felt is packed with lead type players.  While many are small roles, each is excellent in terms of importance to the storyline.

Most of the writings about the person Mark Felt suggest he was a G-Man’s G-Man who followed the rules.  The vast majority of the time Felt follows the government’s rule.  However, when Felt believes some one or some body is undermining to great adverse effect the mission of the FBI or the safety of U.S. Citizens, Felt applies his rules.  The movie Mark Felt pulls no punches in showing how rules are applied in various circumstances, and lets you draw your own conclusion.

The settings for many of the scenes in Mark Felt compliment the film and its intent. Mark Felt is about the behind the scenes of things; the inner workings.  The government offices are not grandiose with perfect sightlines and lighting.  The offices look to be those of the period, heavy in wood and poor in natural lighting.  It makes for great effect.

Mark Felt (Twin Falls) and his wife Audrey (Gooding) were born and grew up in the state of Idaho in the 1910’s.  They met during college at the University of Idaho and married in 1938.

In Hoover’s FBI, agents were deliberately moved around to as many field offices as possible, with the desired effect being an agent could go into any office and be effective.

So why include in the the headline Repeat or Rhyme Of Itself?  I believe if you remove the specific names, political parties, events, and timeline in Mark Felt and apply another relatively recent crisis in the U.S. Federal Government,  Mark Felt feels like deja vu’ all over again.  And while history does not repeat itself exactly – it at a minimum appears to rhyme.  Step back and think about it – the parallel’s always seem reveal themselves.   And do me, and yourself a favor, do not to the cherry-pick the institution. The foundation of the United States is built upon the separation of power and the check and balances it creates.  When one institution or body desires to force a change to the separation and balance (legally or illegally, in public view or shrouded in secrecy) history shows the U.S. moves to a bad spot with heightened speed.  By luck or greatness some set of people or institution(s) identify the issue and have the guts and resolve to address it and create the appropriate solution for the best of the U.S. citizens.