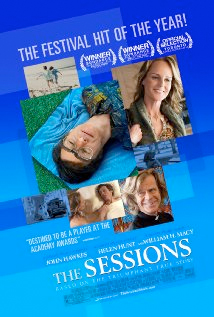 The Sessions stars Helen Hunt and features Moon Bloodgood.  Both Hunt and Bloodgood are physically attractive females, but the story does not need it.  The Sessions stars John Hawkes and features William H. Macy.  Both are two of the movie industry’s most chameleon like actors –  The story utilizes their ability in this area to its fullest extent.