As a kid, a drive around town on Sunday was a regular event.  As a family, we would pile into the car and venture to see sites of interest or of note. On this Sunday, Koa Fuller and I decide to devote the entire day to travelling the Na Pali Coast of Kauai.

Given the terrain, the only route is on water in the Pacific Ocean. Therefore, we use Koa’s boat instead of my Toyota Tacoma or Porsche Targa. 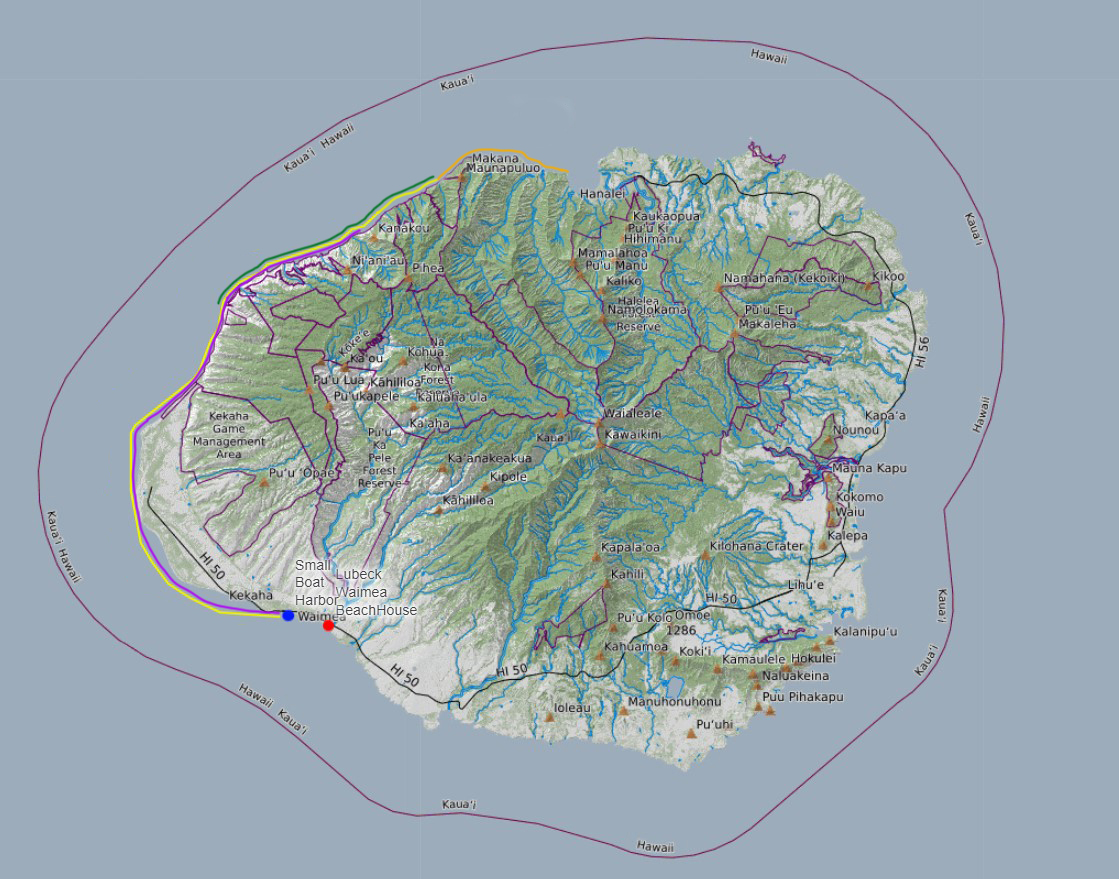 We decide to leave early in the morning.  We depart at 6:53 AM from the Kikiaola Small Boat Harbor in Kekaha. While it is after dawn, we will beat the sun to Polihale as begins its rise over the mountains. The plan is not to race up and down the coast.  On the contrary, we are decidedly operating at a leisurely pace.

Miloli’i Beach is just north of Polihale Beach.  It starts north of the Pa’Akiki Valley and waterfall.  Miloli’i Beach sits below the big chunk of rock named Kawai’Ula.

Thus begins what is an otherwise incredible 10+ mile stretch of natural beauty (aka the sweet spot).

Next up on the Na Pali Coast is Nua’lolo Kai Beach.  It is separated from Miloli’i by the Ka’Ahole Valley

Nua’lolo is an exceptionally important location for the people of Kauai.  It has operated as the safe haven meeting point for the families of the North and West Coast for ages.  The nearby cliff’s tower over the beach.  I travel out the Nua’lolo Trail to view the beach from above each of the previous two weeks. Images from those trips are below.  The story about the trips are [here] and, [here]. 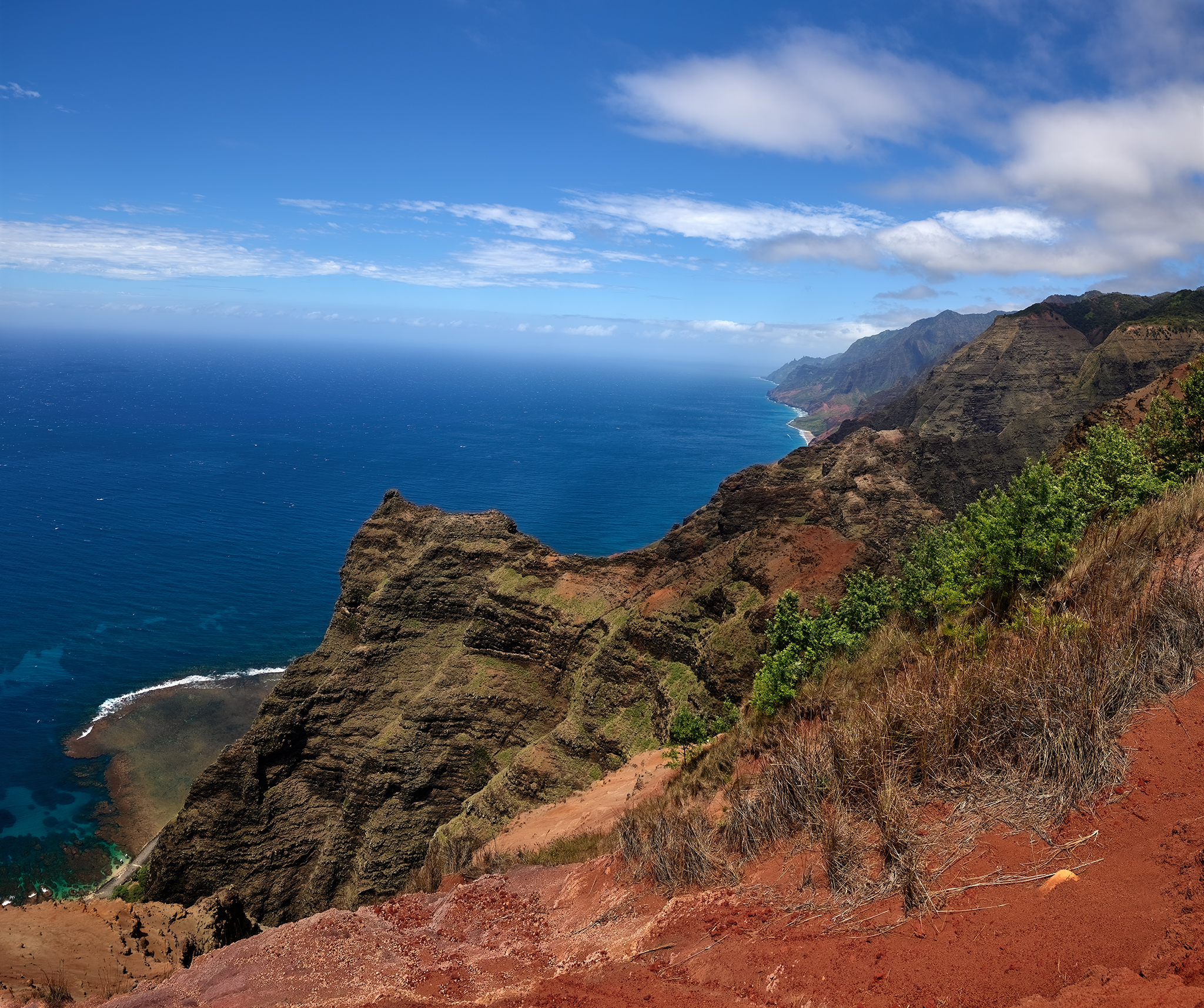 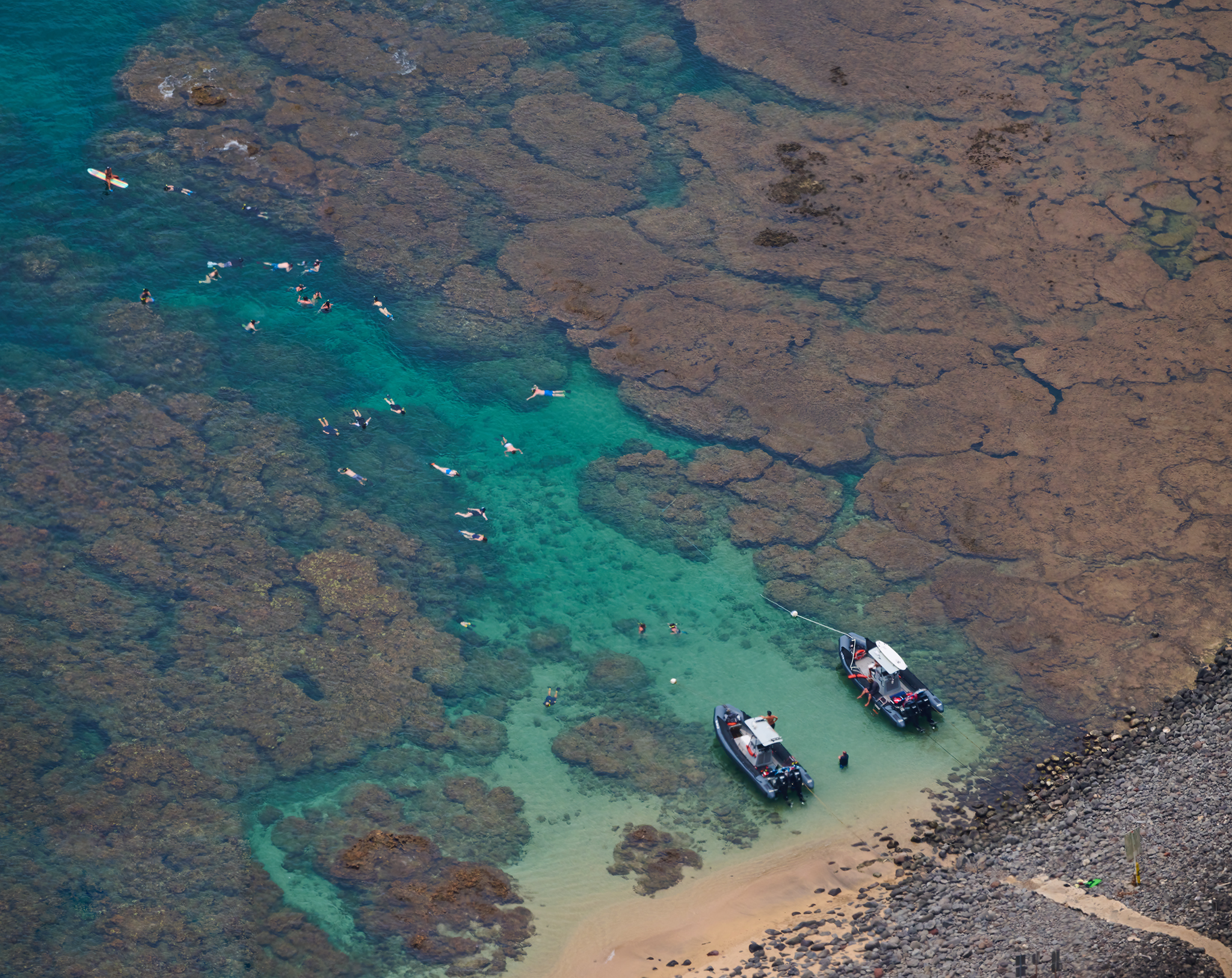 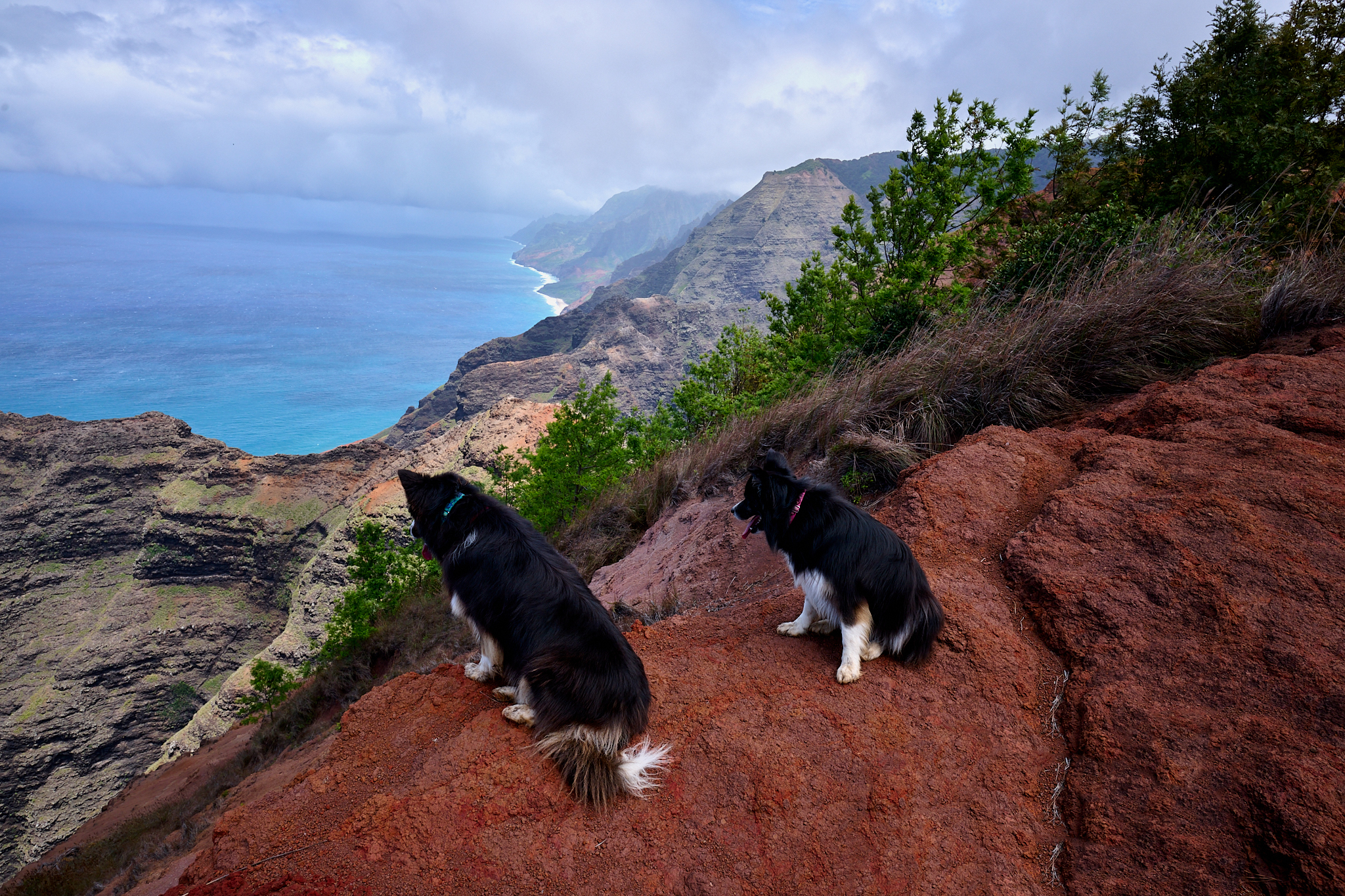 Koa and I agree the morning remains young.  We think it is best to see what the light and angle of the sun looks like at Honopu, the Cathedral, and Kalaulau.  The water on the coastline is calm.

Honopu never ceases to amaze me.  The perspectives of it from the water, the top of its ridgeline, or above in an aircraft are magical.  Images from those perspective are below and [here] and [here]. 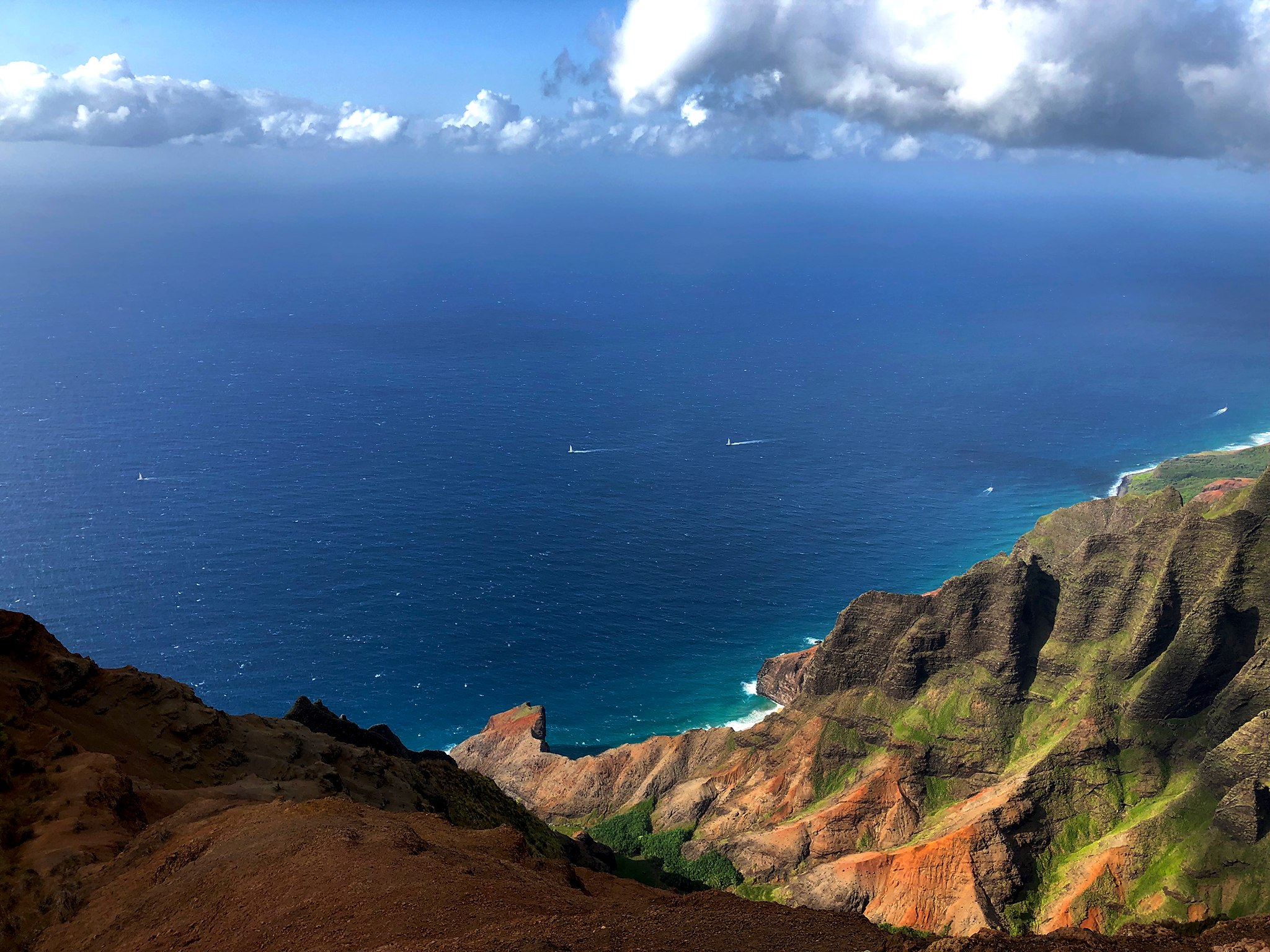 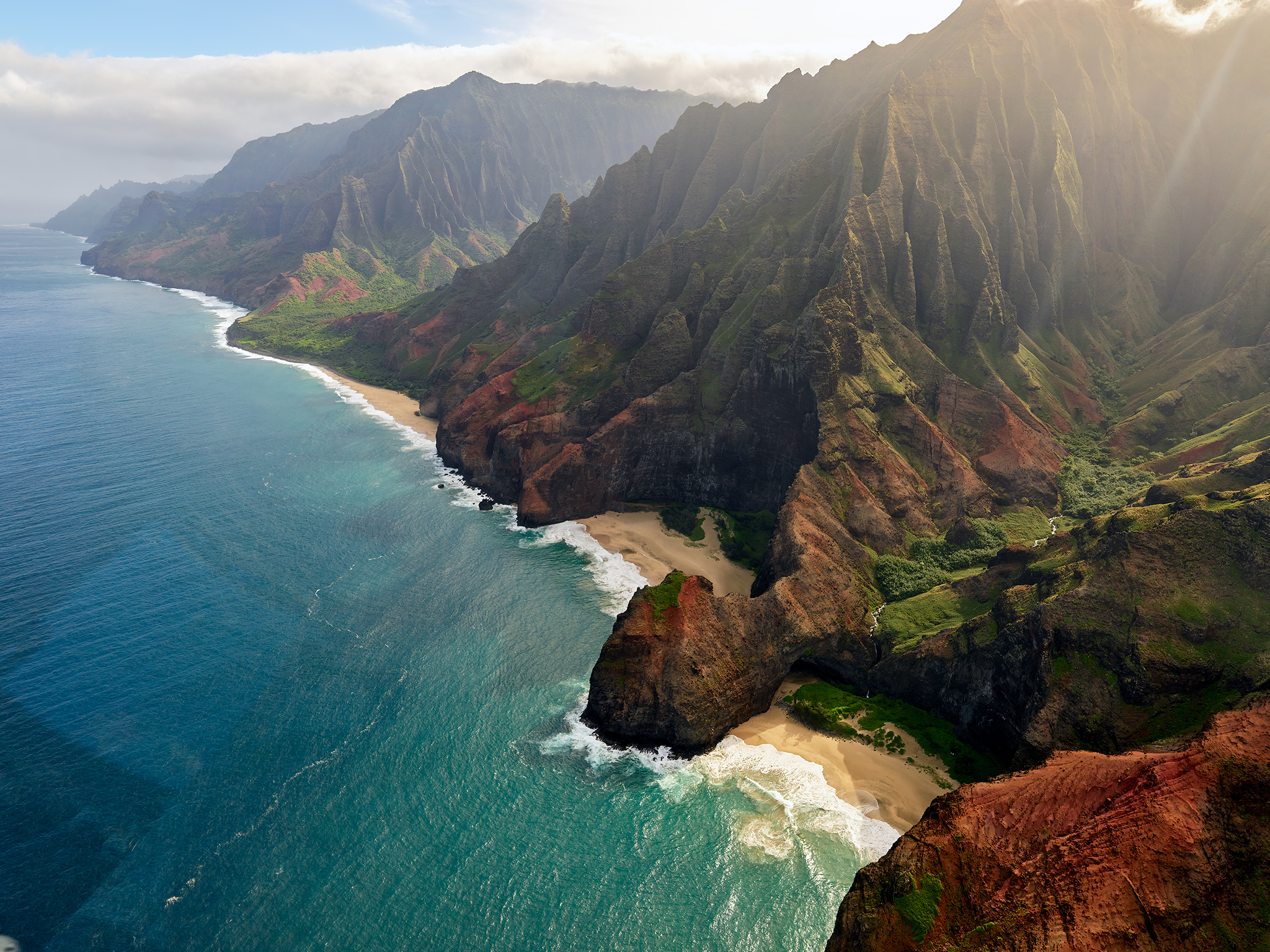 Next up is the Cathedral.  Koa and I arrive as the light from the sun hits the Cathedral exactly as I would request.  Koa moves the boat towards and away from the shore.  This action allows us to grab images of the coast line at a variety of distances.

We decide to move north and south, and in and away from shore.  This action allows to capture stand-alone and group images of Kalalau, the Cathedral and the full coastline.

Koa and I agree we need not become so enamored with the light and its impact on the two stupendous spots that we miss photographing the other places on our agenda.

We continue north passing the Kanakou, and Hanakoa Valley’s. After these Valley’s the coast is exceptionally rocky and lined with sea cave after sea caves and a litany of waterfalls.  This terrain remains in this state until Hanakapi’ai Beach.  The renowned, Kalalau Trail sits above us for this stretch of travel. The vast majority of people who are lucky enough to step foot on the Kalalau Trail cover its first two miles to Hanakapi’ai Beach.

We do not expect to capture many images in the sea cave. Koa and I expect we are too late for the morning sun and too early for the late afternoon sun. To our surprise, the light in the Open-Ceiling Cave is not bad.  As we enter, Koa notices that the boat and its occupants already in the cave are his friends.  The guy standing on the rock in the middle of the cave (in the image below) is named Hanalei. 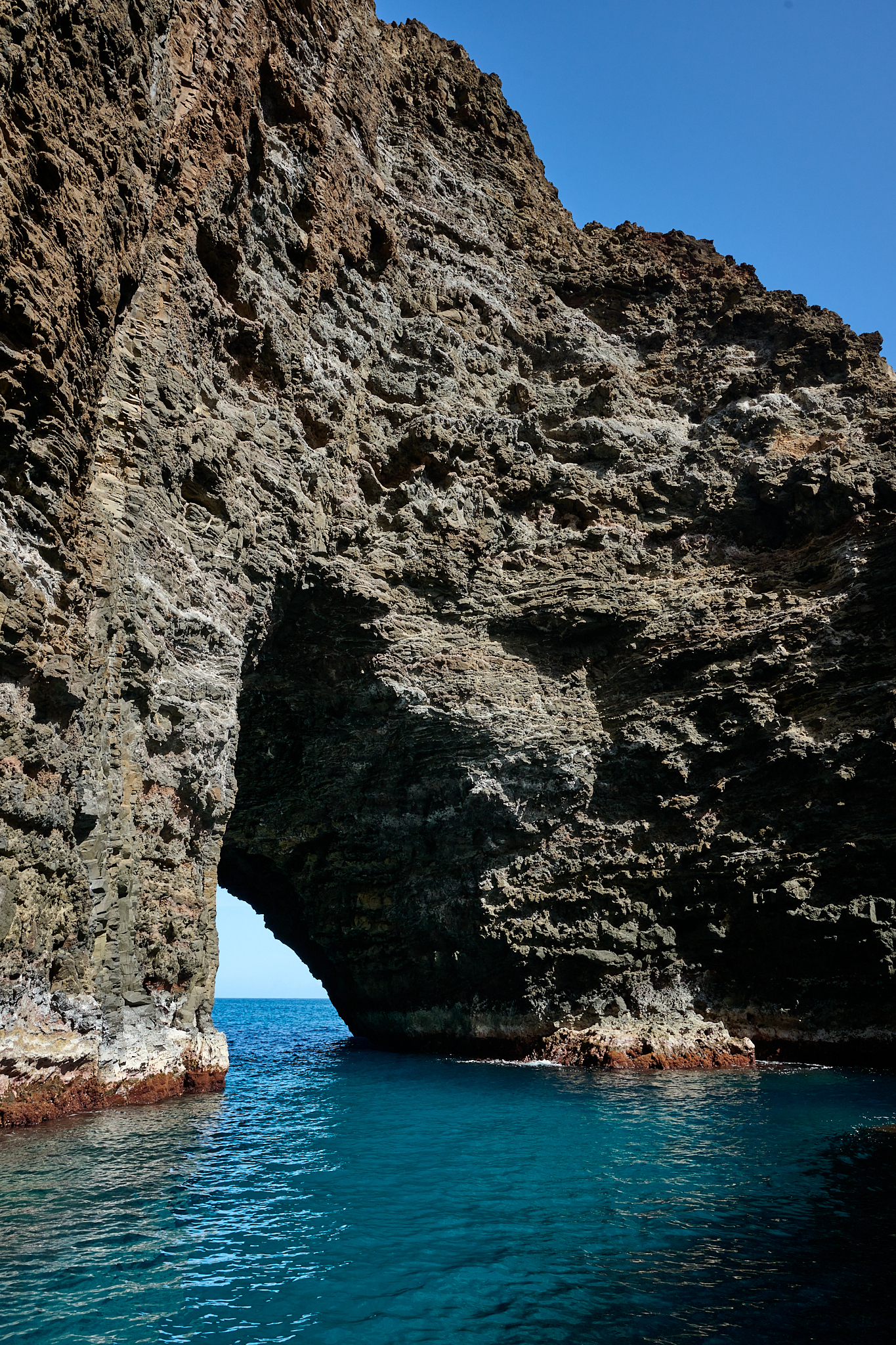 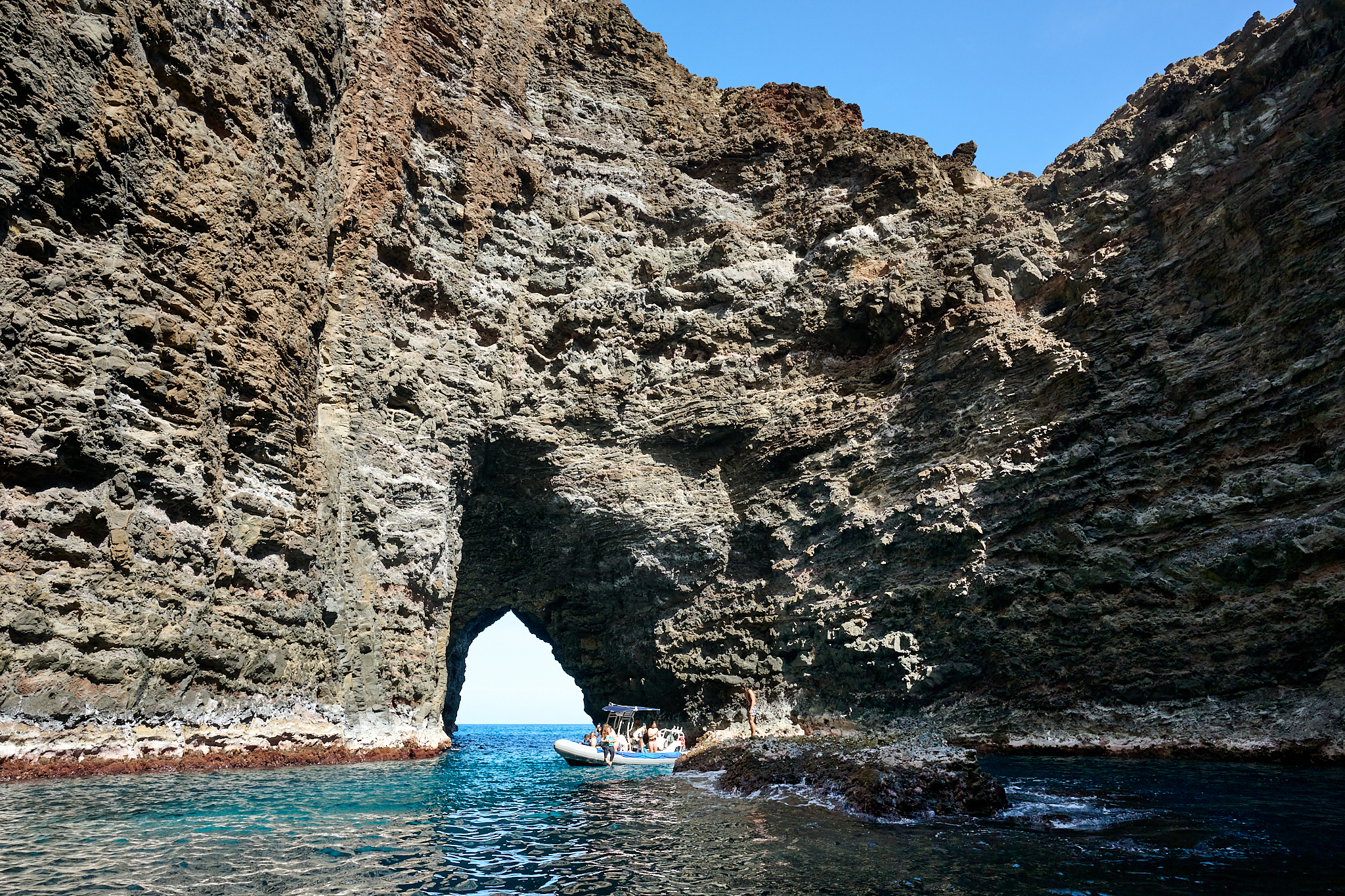 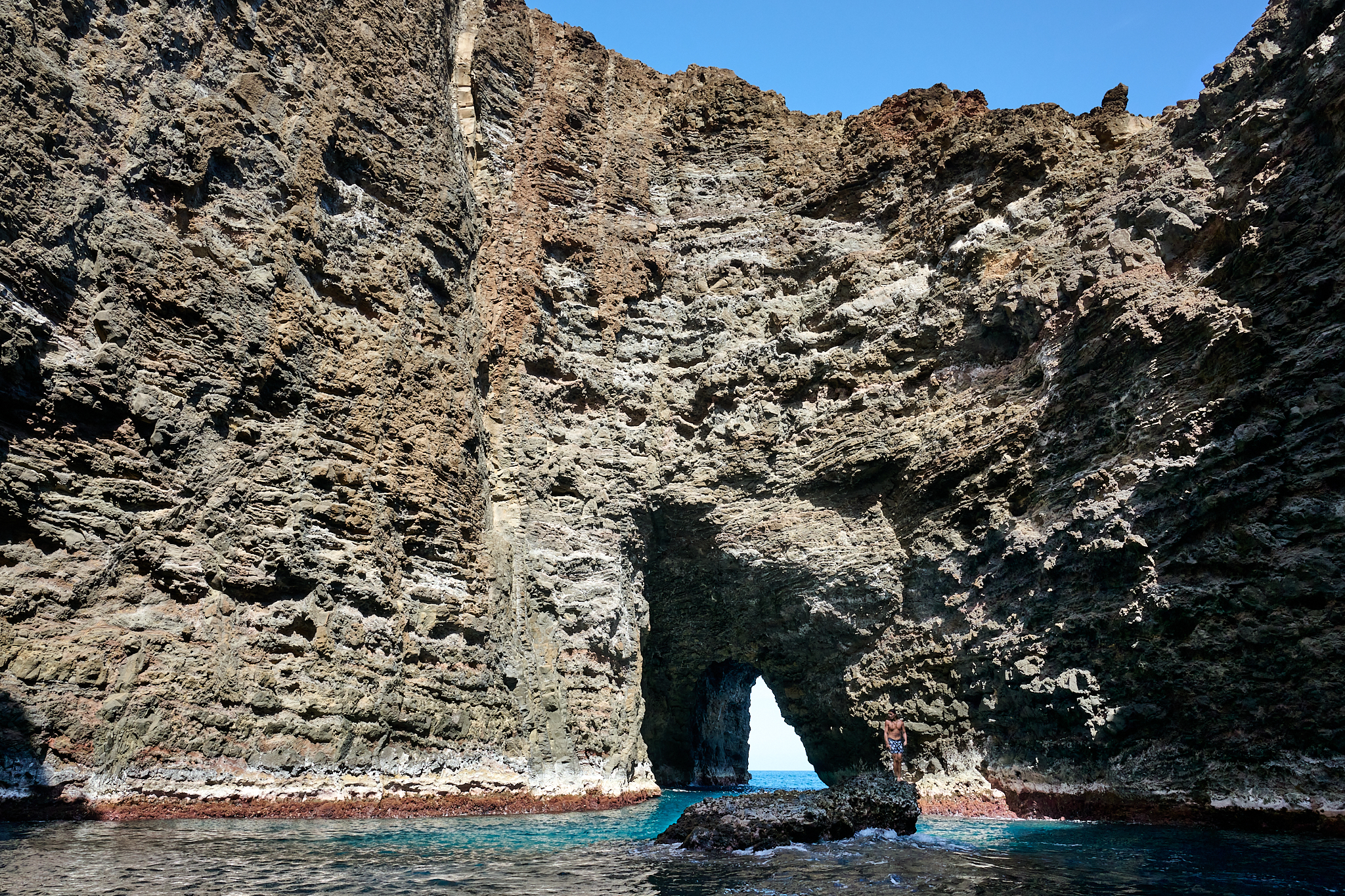 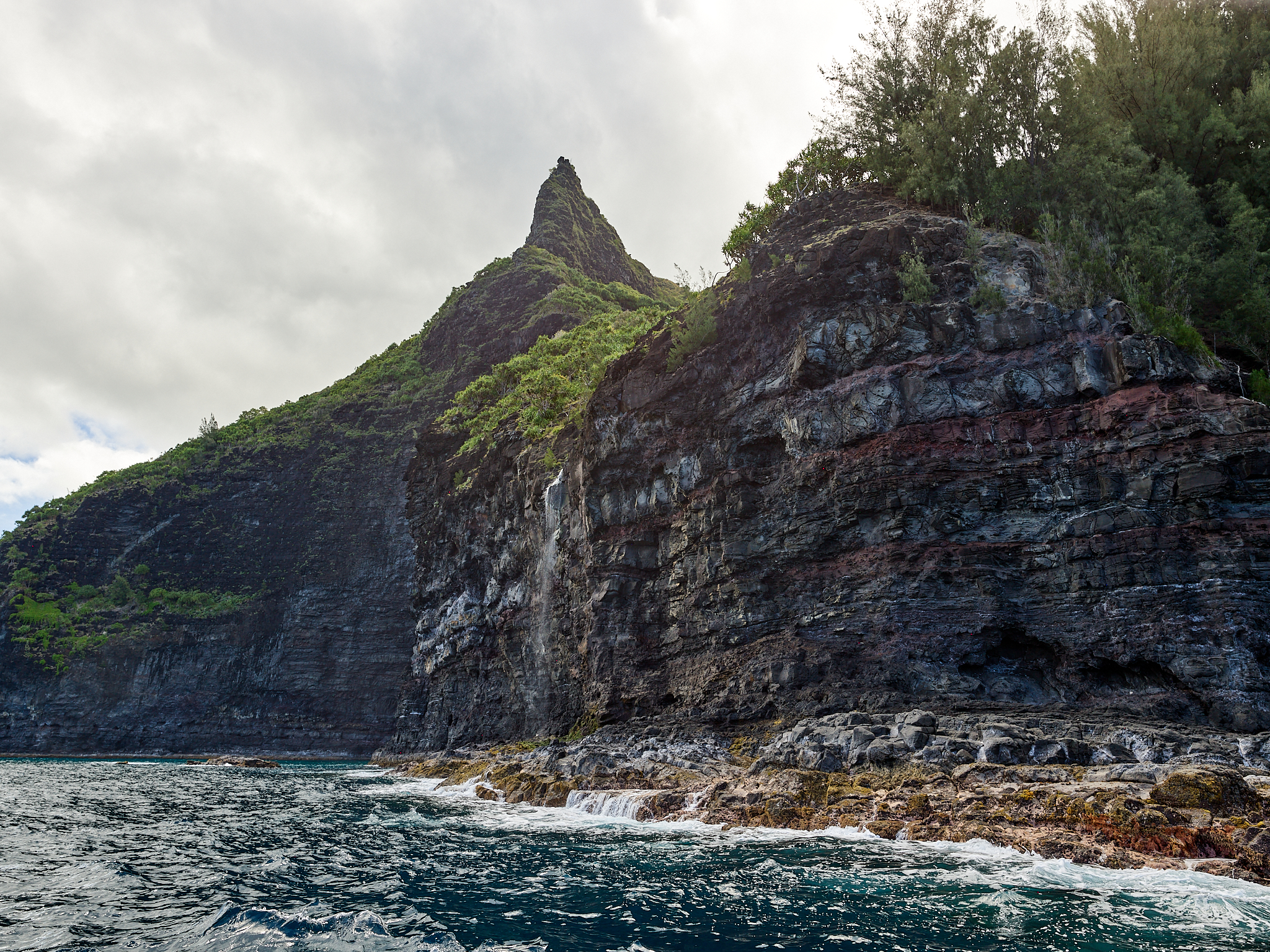 As Koa and I continue towards Hanakapi’ai Beach clouds move in and the sky turns from bright blue to dull and gray.  The implication is that the sea caves and waterfalls will be gray and uninteresting.

Will the return trip down the Na Pali Coast be as gray and uninteresting?  My guess is not.  I have learned that living on Kauai reveals to you that the weather conditions and light Na Pali are as dynamic and ever changing as any place on earth.

From a photographic perspective, if there are no clouds and only mid-day sun available – Koa and I should high tail it home to Waimea.

My greatest desire to is have clouds hanging around the rim tops of the canyons with varying degrees of light.  This condition is what I experience and enjoy the most about the Na Pali Coast.  My wish is granted.

As we pass the Hanakoa Valley, the sun breaks through the clouds. Spots of light appear on the valley floor and wall.  Patches of blue sky and water filled clouds present themselves as well.  There is an emerald tone to the entire coast for but a few seconds.

After capturing the image of the Hanakoa Valley, my attention turns to the south.  Koa looks in the same direction simultaneously.  We turn our heads towards each other and smile. Kanakou, Kalalau, the Cathedral and Honopu are in a similar condition.  Can we get into position in time?  Better to be lucky, than good!

*** Jeff’s Thoughts and Other Worthless Trivia ***

As always… the images and text in this Post of my making are © Copyright Jeffrey H. Lubeck & MESH Art LLC – all rights reserved.

Koa Fuller and his wife Bethany own Kohomana Charters.  It is a family owned company.  There are many benefits to taking a charter tour or conductin a photo shoot where the Captain owns the boat, and the company.  Tours and photo-shoots are completely different animals. I have been on both with Koa. Koa, Bethany, and Kohomana are worthy people and operations.  It should be noted that I receive no financial remuneration from them for my complements and recommendation.