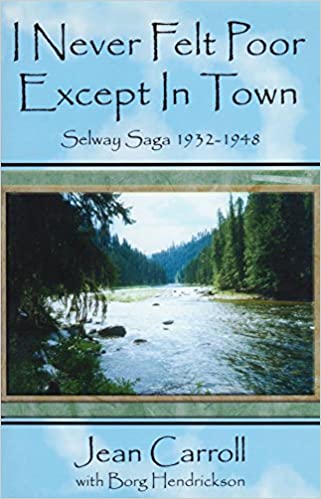 Carroll’s story begins as 2 year-old moving with her family into the heart of one of America’s recently designated Primitive Areas by mule to start life as Backcountry Outfitters in 1932.  Their home and ranch are 40 miles from the end of the nearest road and 80 miles from any town. The Primitive Area is the Selway River region in North Central Idaho.  Today the Selway is perhaps the shiniest gem in America’s Crown.  The Selway was the first and only river to be in the original U.S. Wilderness Act of 1964 and original U.S. Wild & Scenic Rivers Act of 1968.

Carroll’s story reveals her feelings of freedom and self responsibility when in the wilderness and restriction when in town or city life. Each new aspect of her story provides insight into life in rural, and isolated America in the 1930’s and 40’s.

Carroll’s story-telling is frank and to-the-point.  The writing style is first-person and conversational.  The narrative feels distinctly her voice.  If you are expecting a polished work – you will be disappointed.  If you desire to read something genuine – you will be rewarded.

I Never Felt Poor Except In Town presents some of the hard realities we experience in human life regardless of the day or age.  However, there is a certain romance generated by Carroll’s words and story.

Jeff’s Worthless Trivia and Other Thoughts

In July 2020 I floated the Selway River as part of a photo-shoot for Selway River Adventures (SRA).  The story is [here]. We started on July 5th at the Paradise Put-In and ended on July 9th at the Race Creek Take-Out.  Jean Carroll passed away on July 9th at the age of 90.  I read this book a month later – not knowing she had passed away or that I would be on the Selway at the moment of her passing.

My parents were kids in the early 1930’s.  Because they shared so many memories of their life with me – both in words and images – I have a picture in my mind of America in the 1930’s that is personalized around them.  That picture is of kids growing up in a city that was the epicenter of America’s industrial revolution and well off by almost any societal standard or material measure.  Carroll’s life from this perspective seems nothing close.  Yet, Carroll lived in, loved, and treasured the experience of a natural setting that is as rewarding as its gets – at least to me.  I know how Carroll felt – I get to live it every day of my life.

There are remarkable parallel’s in the story of life in the 1930’s and 1940’s as revealed to me by my parents and by Carroll.  The implication of a country’s biggest economic depression and world war.  The loss of young siblings for a health reason, tragedy and death to family members via accident, horrible things inflicted on family members for reasons so sensitive and unnerving I care to not mention further detail.

While we feel there are material problems facing our 21st Century version of America and society – some even seem dire – Carroll’s story is a great reference point for context.

One Reply to “A Life Rich With Experience”