I travelled into the backcountry in the middle-of-winter.  I ventured into my own backyard and got run over by what felt like a bus driven by gorilla appearing from out of nowhere.  I was bounced, if not kicked, to the curb – hard. And if I am asked to file a report with the Custer County Police I will report the condition as happy – hope to get beat up again soon.

Here is my story.

The Sawtooth National Wilderness immediately west and northwest of Redfish Lake near the town of Stanley, Idaho offers a remarkable amount of terrain for the backcountry traveller/skier. Within this part of the Sawtoooth National Wilderness sits the Goat Creek drainage.  Goat Creek is a trail-less region with its headwaters starting at Thompson Peak (10,714) – the highest in the Sawtooth Mountain Range.  This area is my home both figuratively and literally. 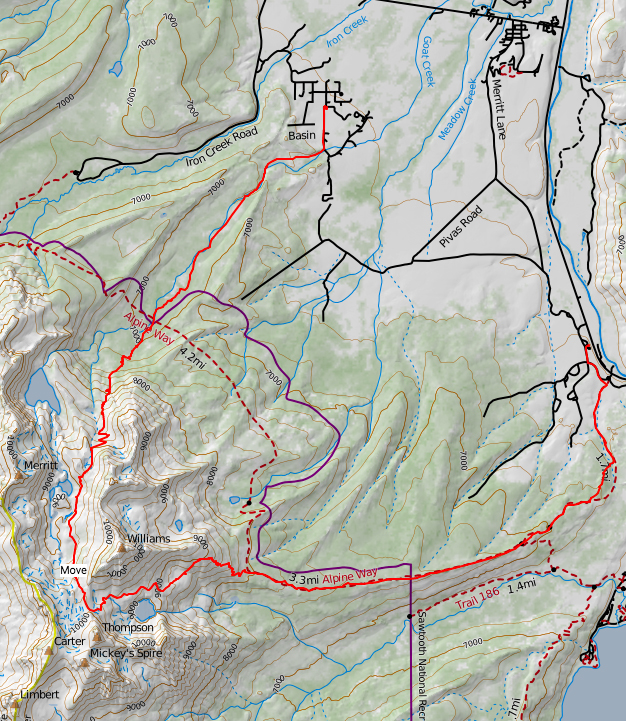 On this day, I am attempting to ski the length of the Goat Creek drainage (top-to-bottom) in a single shot – 13.5 miles in total.  To even attempt the Goat Creek portion, the effort requires skiing on skins for 7 miles at elevation and gaining 4,000+ vertical feet simply to reach the start the challenging downhill portion; the Goat Creek drainage. The starting and end point of the trip is my cabin – which borders the 686,000 acre Sawtooth National Recreation Area (SNRA).  So, yes I plan on finishing the day by skiing directly back to my front porch.

As is the norm, Chris and Sara Lundy – the co-owners of Sawtooth Mountain Guides (SMG) join me for the trip.  Two years ago (March 2015) Chris, Sara, and I performed a six-day ski tour and climb across the heart of the Sawtooth Wilderness.  The first two days of the March 2015 trip took us on the very top of Thompson Peak.  For this trip we are traveling the same route for the first seven miles – to the saddle at 10,000 feet between Williams and Thompson Peak.  The difference is we are completing it in one-day versus two. It will also be followed by 6.5 miles of downhill skiing versus stopping and spending the night in a tent as we did in 2015.

The route up from the Stanley Ranger station is one well known to me.  The first five miles are on what is otherwise known as the Alpine Way.  This high ridge-line route offers superlative views of the Fishook Creek basin and its surrounding peaks.  Dead center is Horstmann Peak – a big brute.  Chris Lundy is the first person (recorded) to have climbed and skied off the top of Horstmann Peak. It has been my pleasure to travel the length of the Fishook by foot and ski and ascend many of its peaks – winter, spring, summer and fall.

While the views during this early portion of the route are memorable, one of the downsides is it involves skiing many miles on otherwise hard-pack snow.  The implication is your feet are going to take a tremendous beating and hot-spots are likely to present themselves.

After five miles and 1,600 vertical feet of elevation gain, we break away from the Alpine Way Trail.  At this juncture we stop, rest, fuel up, and check out our feet. In 2015, the difference is the three of us ski another 1/4 mile on the Alpine Way Trail and drop down into the SMG’s Williams Peak Yurt to spend the night.  Today there is no such respite.

After our rest, and refuel we embark on the major ascent of the trip.  We are about to gain 2,400 vertical feet a bit less than two miles.  Most of the ascent while steep, is wonderfully smooth and easy. However the route involves two tricky spots.  The first is a drop of 400 vertical feet at a 45-50 degree slope just before lunch-break. The second is the last 1/4 mile of the ascent which is on a 60+ degree slope.  These pitches on skis are made materially more difficult by heavy packs loaded with bulky camera gear.

In most narratives describing elevation, change in elevation, degree of slope, and distance is sometimes hard to convey.  Before I begin to describe the descent and use Defined Names such as The Garage Can and The Garbage Chute, some perspectives are provided for which you may be familiar.

If you ski in Michigan:

If you ski in Sun Valley, Idaho:

Sun Valley, Idaho was America’s first destination ski resort.  The chair-lift was invented in Sun Valley.  The Union-Pacific Railroad explored and considered the best terrain in the United States for the sport of skiing – with only a tiny locale in Idaho meeting the criteria.  In my opinion I agree. Bald Mountain is as good as it gets for chair-lift served skiing in the U.S.  In an intense 10-year period Linda, and I skied almost every major ski-mountain in the U.S. and Canada – many on multiple occasions.  While Taos, New Mexico was close, Sun Valley and the Wood River Valley simply could not be beaten.  Baldy tops out at 9,140 feet in elevation and offers 3,420 vertical feet of skiing.  Two runs (Warm Springs and River) effectively provide the entire 3,420 foot change and are just short of two miles in length.  Baldy’s signature characteristic is a moderate to demanding degree of slope that is consistent in pitch from top to bottom for each run.  Many believe that given the total elevation change, the length, and consistency of angle of the runs – you can ski faster on Baldy than any other lift served mountain in the world.  For example most of the iconic runs (Exhibition, Holiday, Inhibition, Limelight) rarely exceed 35 degrees in angle, but also do not change their angle by much for the length of the run.  The May Day Bowl run sits between 32-34 degrees for its entire 1,600 vertical feet of descent.  The implication being in ski shape, dim witted, and having long runs at a steady steep pitch available?  In the 1985 pre-quad speed lift era Mike Andary and & I skied 67,300 vertical feet on Baldy in one day.  It was a non-stop, no wait line, ski top-t0-bottom without breaking, eat on the chair-lift effort from the first chair up for the the day (8:45 AM) to the last (4:00 PM).

If you ski in Washington State:

Crystal Mountain offers some outstanding terrain.  Snow King, Powder Bowl, Snorting Elk all provide 35-45 degree pitches for 400-500 vertical feet.  The drop off from the top Snow King and Powder Bowl usually requires a jump off a cornice of 3 – 10 feet in height with the initial 100-150 vertical feet at a 60+ degree pitch.

As for the skiing the Goat Creek drainage from the saddle between Williams Peak and Thompson all the way back down to the Lubeck Cabin?  The descent of 4,000+ vertical feet on a run of 6.5 miles is of moderate slope except for the top of the Garbage Can and the entire length of the Garbage Chute sections – which are 40 – 60 degrees in angle.  The descent down the Goat Creek Basin is visually stunning for its entire length. Merritt Peak and its prominence are addicting to the eye.  The Goat Lakes and Goat Falls (encased in ice) are nothing short of stunning.

So where does the bus driven by the gorilla come into play?  Snow Conditions and 12 hours of travel with a heavy pack!  Yes, the condition of the snow was highly variable with the ultimate effect being the equivalent of getting hit by a bus driven by a Gorilla.  So what kind of snow did we encounter?  New England Boilerplate, Michigan Blue Ice, Himalayan Hard Pack, California Crystalized, Cascade Cement, Alaskan Avalanche, Pennsylvania Pot-hole and Mt. St. Helens Asphalt.  If I did not know better I could easily be led to believe the Lundy’s had all of these conditions shipped in specifically for my enjoyment.  I am calling for a Special Council investigation.  Chris & Sara can and do ski all of these conditions without their hair getting mussed. On this day, I show a variety of forms.  Up until bus incident I am a bit tired, but feeling comfortable and in control. Afterward, my skiing form appears to match that of a Korean Inter Continental Ballistic Missile (ICBM) having lost its guidance system.

On the way down we spot Mountain Goats.  In the middle of the Garbage Can section we notice a Momma and Baby Mountain Goat scaling a good portion Williams Peak.  The Garbage Can and Garbage Chute are notorious for being nothing more than routes to the bottom of the drainage chock full of avalanche debris.  On this day the conditions are quite different.  The 2016-2017 snow season represents a 100 year event; with snow levels approaching 200% of normal.  The Garbage Can and Garbage Chute are full of snow.  This makes the descent materially easier.

The Garbage Chute is steep and narrow.  Really narrow.  The snow base is firm with a layer of super fine quick snow on top. The snow condition reminds of the Canyon ski run on Baldy in January and February.  The difference is the Cal Topo map revels the top and middle portions of the Garbage Chute are 50-60 degrees in pitch, while Canyon is consistently 30+ degrees.  I also have a somewhat heavy pack of bulky camera on my back.  However, I will be the first to admit, this setting is my favorite in which to ski.  Suddenly, my energy has returned.  Chris and Sara are well below towards the bottom of the Garbage Chute. Magically skiing with purpose returns. No unguided missile on the section. That is until we leave the Garbage Chute.  Before us lies a couple of hundred vertical feet of 3 day old frozen avalanche debris.  Snow, ice, trees and rocks!  These conditions remind me of running on a creek-bed of uneven size boulders 40 miles into a 50 mile back-country endurance race.  This stuff hurts the feet – and you have boots and skis underfoot.  We suck it up and Sara even finds a few turns of nice powder conditions which points out “are are only ones for the day.”

We reach the bottom of the big-downhill skiing – The Alpine Way trail – which circumnavigates the mountain and drainage we are skiing.  We are now in the Goat Creek Meadow.  Technically a trail-less region.  This spot is almost exactly 3 miles from the cabin.  The meadow is gently sloped in a stupendous setting for 1.75 miles before the creek drops more materially for .75 miles.  The final .5 miles is on our private road where it meets the creek back to the cabin.  I have skied to this spot from the cabin and back all winter.  With the last being two weeks prior.  As we reach the road I determine my condition officially as “spent.”  We ski back to the cabin and the front door cannot appear too soon.  At 3 minutes under 12 straight hours of work, we dump our gear and have a glass of wine in the confines of the cabin. We toast each other for completing (some would suggest surviving) the route within our time goal. After Sara and Chris leave, I jump into a hot tub and relax.  Historically I require very little time for recovery.  Given this endeavor, I do not suspect this to be the case.  Ironically after a solid sleep, I awake feeling remarkable refreshed and full of energy.  I actually ski back up to the meadow and make a few turns from the top of the ridge-line.  I am surprised I feel so good and no buses with gorillas as drivers appear.