A some point during the month of March Kyle and I decided that as a followup to our summit-ting the highest peaks in the five mountain ranges surrounding the home territory in 2012 we would focus on the Sawtooth Mountain Range in 2013. Separately, Kyle and I had determined we really enjoyed and looked forward to some type of adventure in the back country each Saturday.

On Saturday June 22nd, Kyle and I choose to attempt to summit Imogene Peak (10,125′). Imogene Peak is about the easternmost named peak in the Sawtooths and is accessed via one of my very favorite trails and drainage’s – Toxaway Lake.  Despite the ascent being 3,234 of vertical gain and 8.6 miles round trip (from the Yellow Belly Lake Trail-head) Imogene Peak is considered one of the easiest peaks in the Sawtooths to summit.  The last mile in the ascent to the summit is about 2,380 vertical feet of Class 3 (Yosemite Decimal System) grade.  Therefore, easy is relative.

For this ascent, Kyle and I invite the girls (Shae and Merry [Christmas] Dogs).  The Yellow Belly Lake trail-head (7,046′) will be our starting point.  It is situated in the lower third of the Sawtooth Valley.  The plan is to hike into the Toxaway Creek drainage and at Farley Lake (7,745′) head north and straight up the face of Imogene Peak.  Farley Lake sits between and below Parks and Imogene Peaks.

I inform Kyle that the seven miles of Jeep road from Pettit Lake into the trail-head will be as bumpy a ride as ever encountered.  This time during the rock-and-roll trip into Yellow Belly we encounter a young black bear.  The bear is as surprised to see us as we are of the bear.  The girls immediately request that we let them out of the Jeep to visit with their new friend.  A request Kyle and choose not to fulfill. All of us watch the bear run in full sprint across a mile wide meadow into a stand of trees.

The trail from Yellow Belly to Farley Lake is gradual with an outstanding trail-bed. Almost all of it is contained within the National Wilderness boundary of the Sawtooth National Recreation Area (SNRA). This portion of the trail has one significant creek crossing.  At this time of year the implication is you wade across knee-to-waist high water or traverse 35′ feet on fallen tree log.  The girls choose to wade/swim and Kyle and I attempt to traverse on the fallen tree.  The fallen tree is a big boy.  However the fallen tree only covers about 95% of the crossing and the last 1/4 of the log is really bouncy.  It should be noted that Kyle has been competing in the Tough Mudder events across the country this year and his times put Kyle in the top 5% for 2013.  He has been invited to compete in the Toughest Mudder in November.  Yet again, I am the weakest link in the chain. Meanwhile, I suggest to Kyle that in order to make this challenging for him, he should have to cross blindfolded and wearing both our packs.  There is some fortune for me; once a week for 11 of the past 13 weeks, I have completed the five circuit Tough Mudder Boot Camp training session with Kyle.  As parts of those sessions we walk across, jump on and off and hold a large weight while bending at the knees on a beam.  Both us of traverse the log successfully. 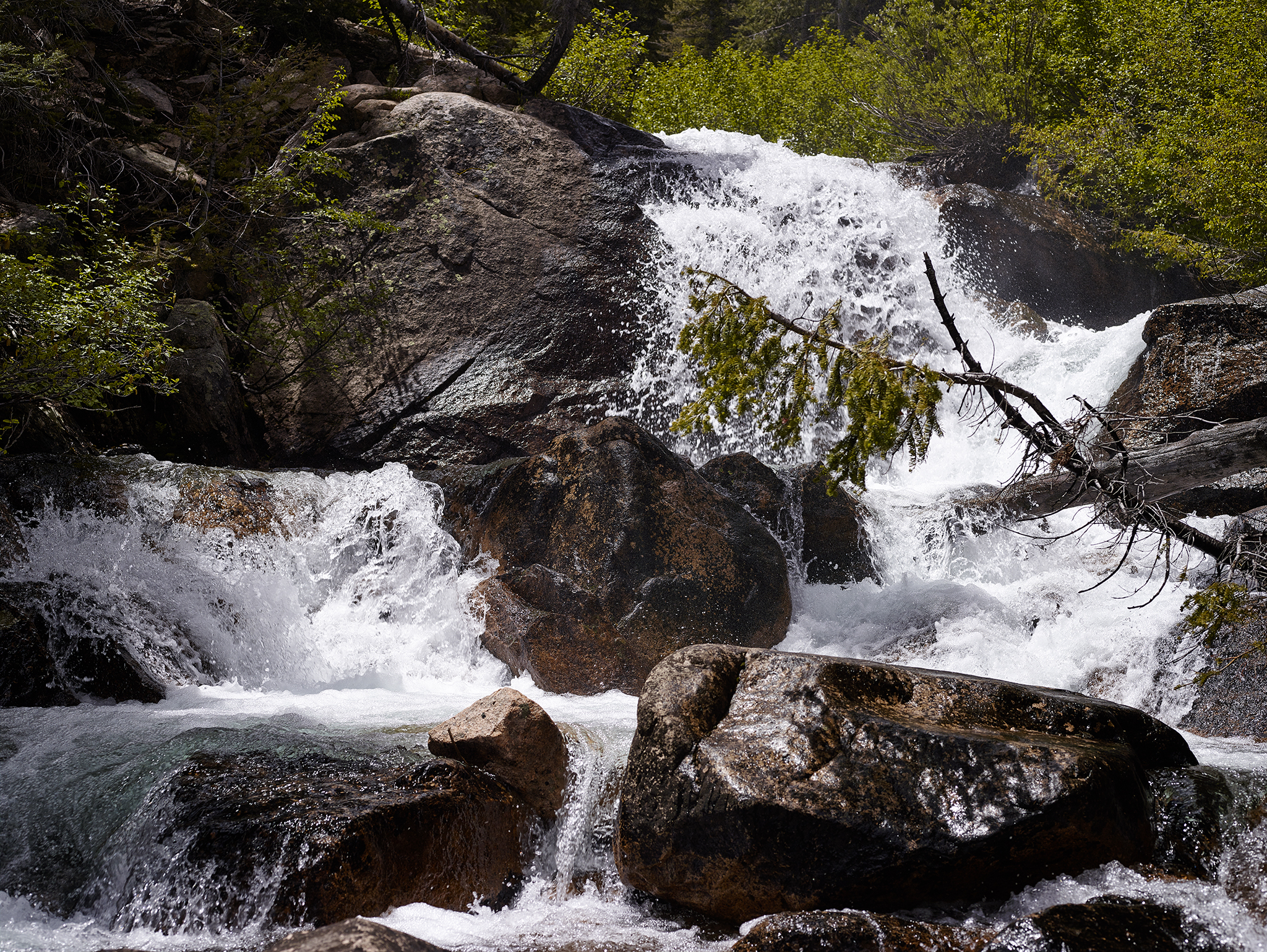 The remainder of the trail to Farley Lake affords us the opportunity to view some outstanding waterfalls.

The route from Farley Lake to Imogene Peak from a technical perspective is straightforward.  The bottom line: getting to the top is a grunt – pure and simple.  The majority of the last half is climbing through a very fine grain scree (i.e. think sandy beach). Think about crawling 1,100 feet at a 55-75 degree + angle on your hands and knees on the beach in Florida or California.  Today we receive the benefit of the temperatures being in the high 40s and lower 50s at this altitude in the morning in June.

Once on top of the ridge line the views are a reward for the effort.  We are afforded good looks at Farley Lake.  We also can scope out Parks Peak and the peaks surrounding Toxaway Lake – most of which are on the Summer In The Sawtooths 2013 punch list.