On Christmas Day of 2021, Santa gives Linda and I a big gift. We have gifted to ourselves, the ability to spend five hours touring up and down the Na Pali Coast of Kauai on a 24 foot-double hulled Catamaran.

It is a private charter no less. It is only Linda and I, with Koa Fuller at the helm.  Fuller is the owner of Kohomana Charters.

We came upon Koa as a result of me looking for someone with whom I could possibly team, and photograph all of Kauai from the water.

After talking with many of the Captains, Fuller’s name percolated to the top of the list. Fuller was born and raised on Kauai. Koa has been a seafarer since he was 15, and is the grandson of one of the original Captains of the modern day Kauai Charter tour circuit.  He lives in Koloa with his wife and and two daughters.  Fuller keeps his boat in Waimea, and uses the Kikiaola Small Boat Harbor in Kekaha as Kohomona Charters port of departure.

Our adventure starts promptly at 7AM at the Kikiaola Boar Harbor.  It is the westernmost port on Kauai.  The port is two miles up the beach from our house.  We walk and or run to the Kikiaola Boat Harbor once (and often twice) most days of the week. Linda often leaves the house just before dawn and arrives as Koa’s boat is about to head out of the harbor.  On this day, for this event, we drive to the harbor and park.

The first 45 minutes of the trip on the water are spent covering the the distance between Kekaha and the end of Polihale Beach. The spot where Poilihale Beach ends is considered the start of the Na Pali Coast.

On this portion of the trip, we get our first experience of seeing places like Barking Sands Beach, The Pacific Missile Range Facility (PMRF), and Polihale Beach from the water.  Linda and I visit these beaches often.  Linda has even been willing to walk the beach that borders the base.  You are legally able to walk the beach – except when military type events are occurring. PMRF is operated by the US Navy and is the world’s largest instrumented, multi-dimensional testing, monitoring, and training missile range.  The Navy allowed PMRF to be used in the 1991 film Flight of the Intruder (posing as Vietnam).  Despite a Hollywood A List of Actors, Writers, and Production team the movie was a box office dud and panned critically.

Polihale Beach is a gem of a place.  It is on most Top Ten To Do lists for Hawaii, and Kauai – often at the very top.  The beach is five miles in length with sand dunes topping 100 feet in height at places.

The Na Pali Coast seems to jump out of the ocean.  The ending ridgelines of the first canyons tower 1,200 vertical feet over the beach.  At the start, the sand of Polihale Beach gives way to a rocky, gravelly shore that is the Na Pali.  The first three ridgelines are named Polihale, Ka’aweike, and Kauhao.  The coast can be seen at the ends of each ridge by hiking 3-5 miles on hunters trails that start on Highway 550 at an elevation of 3,400 feet in the Waimea Canyon.

The fourth canyon and ridgeline is named Mākaha. PMRF has all kinds of operations on this ridgeline.  A paved road is open to the public to the gates of the facilities.  The south section has hunters trails.  Linda, the Border Collies, and yours truly frequent these trails.  The view from the end of the hunter trails at the ridgeline is awesome.

Next up are sections of the coastline of which we are only familiar from land.  It is based on our hiking of the trails starting at the top of the canyon and dropping down to an overlook. Sometimes the overlook is 2,000 – 2,500 vertical above the shoreline.  We are in new territory.

It is also at this point in the trip, that my agreement with Linda to be a tourist and not a photographer on a photo-shoot is re-affirmed. By Rule, I can only take pictures with my IPhone and Sony RX1r.  I have also agreed that there will be no requests from Jeff for stops of material length to get “the shot.”

Koa, from a family history and navigation perspective is moving into coastline that is in his “wheelhouse”.  We discuss caves up high in the canyon wall.  Fuller talks about his grandfather and their discussion as it relates to the caves. The caves in the water are secretive and alluring.  Given it is three days into the winter solstice and early morning, the light is not nearly as dynamic as would normally be experienced.

Regardless, the fact that we are entering and exiting the narrowest of caves with Pacific Ocean seawater pounding and swelling in our midst is thrilling. We are quickly establishing that Koa Fuller knows exactly what he is doing and enjoys it at the same time. 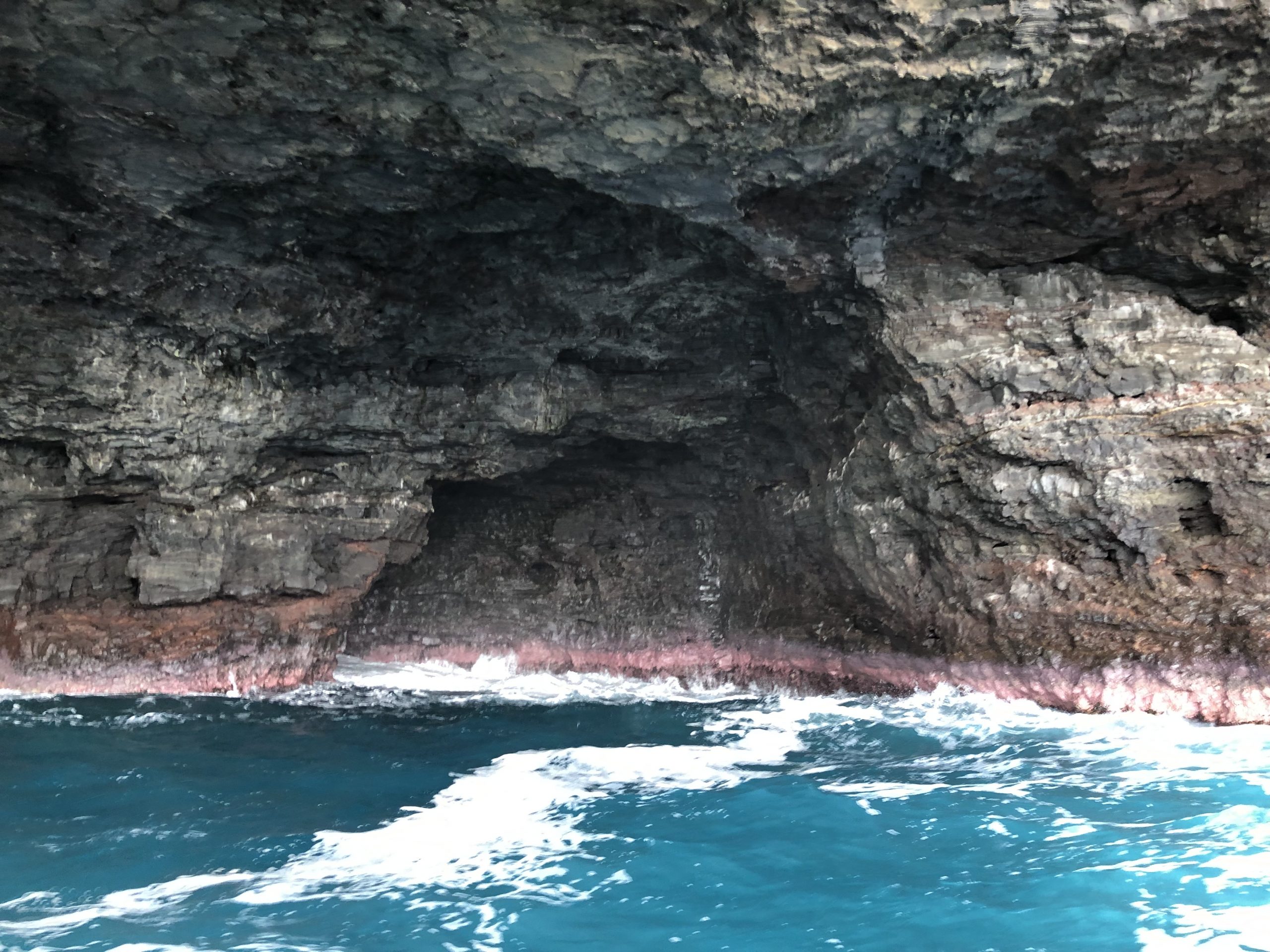 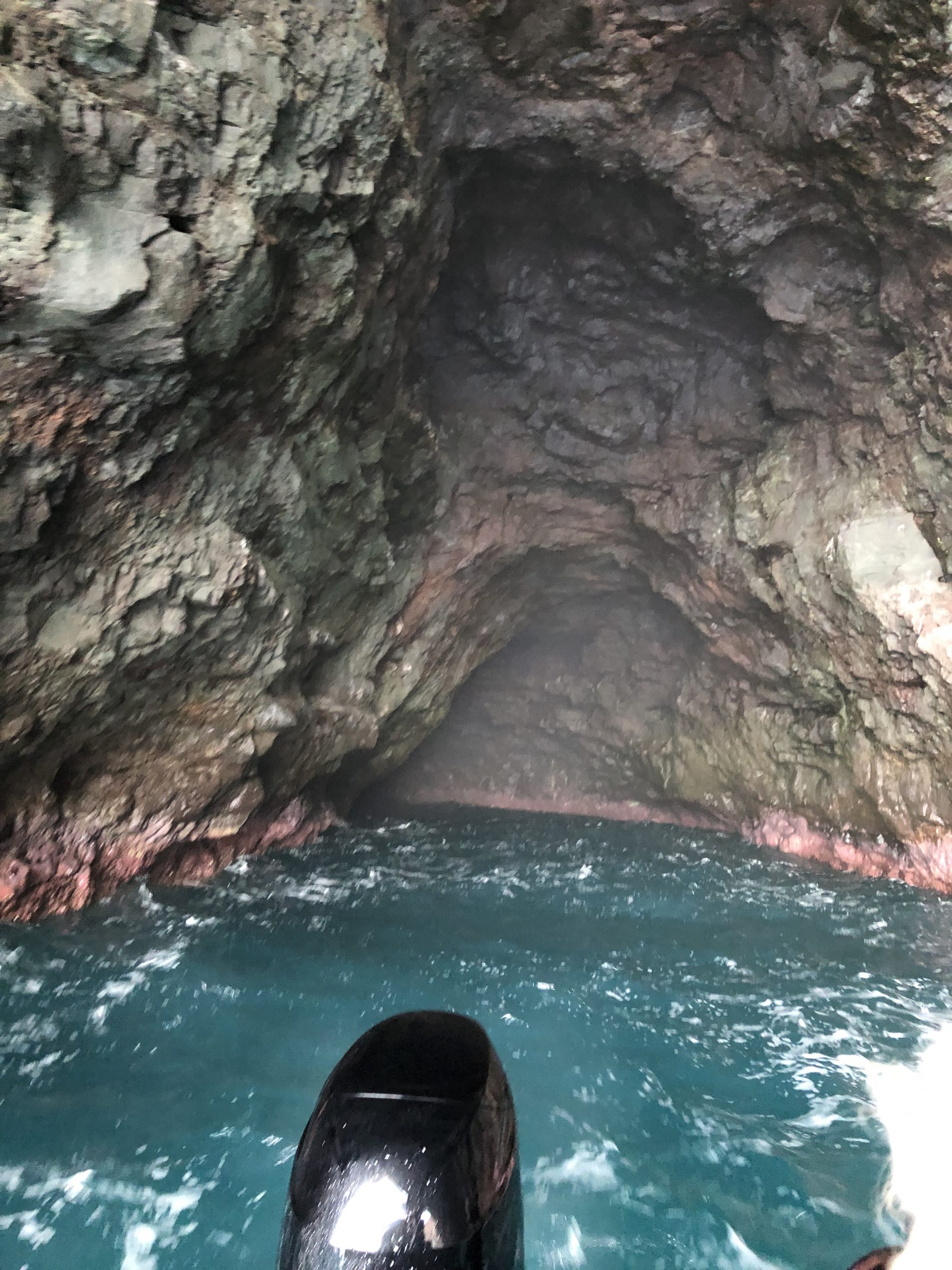 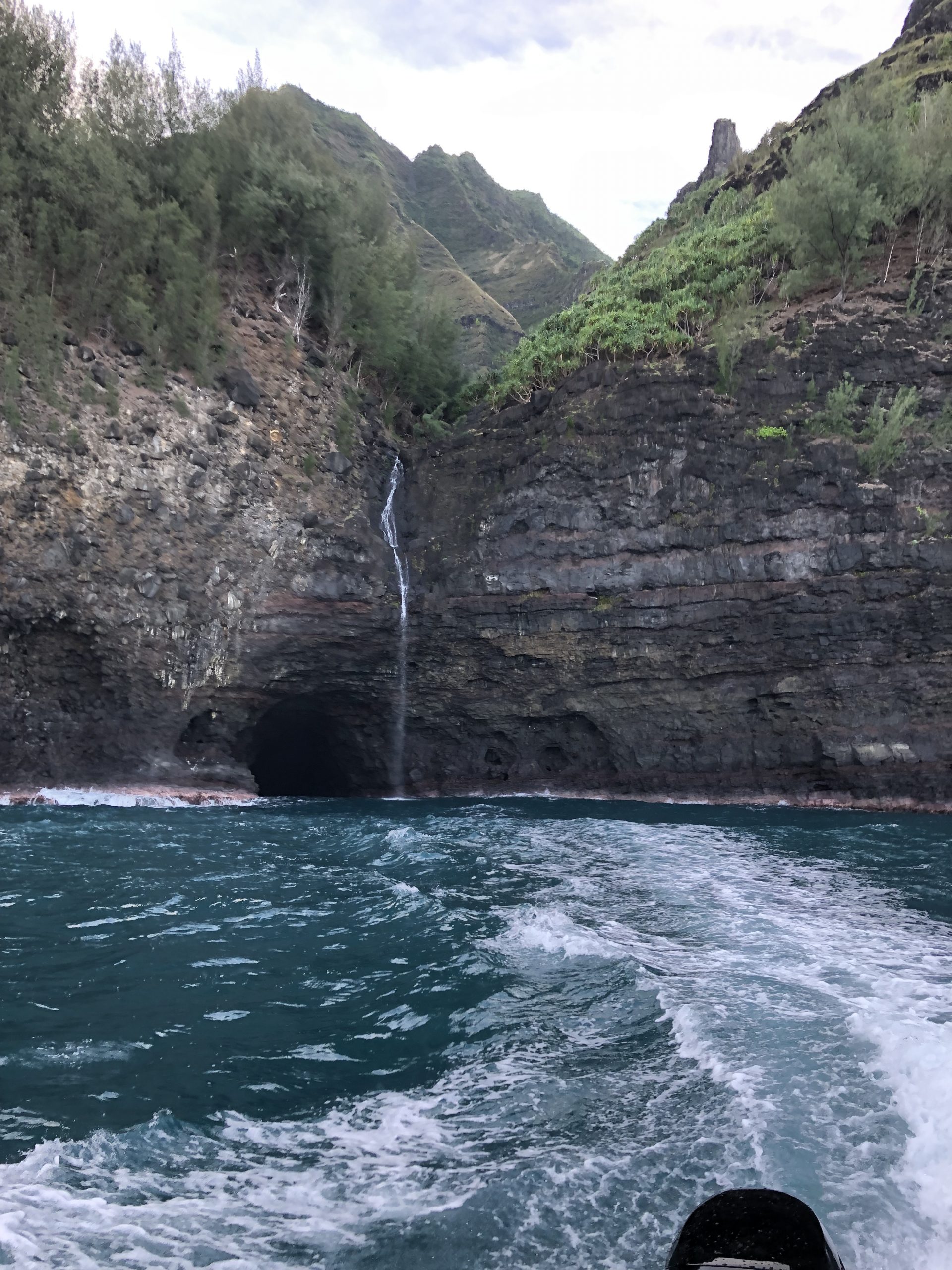 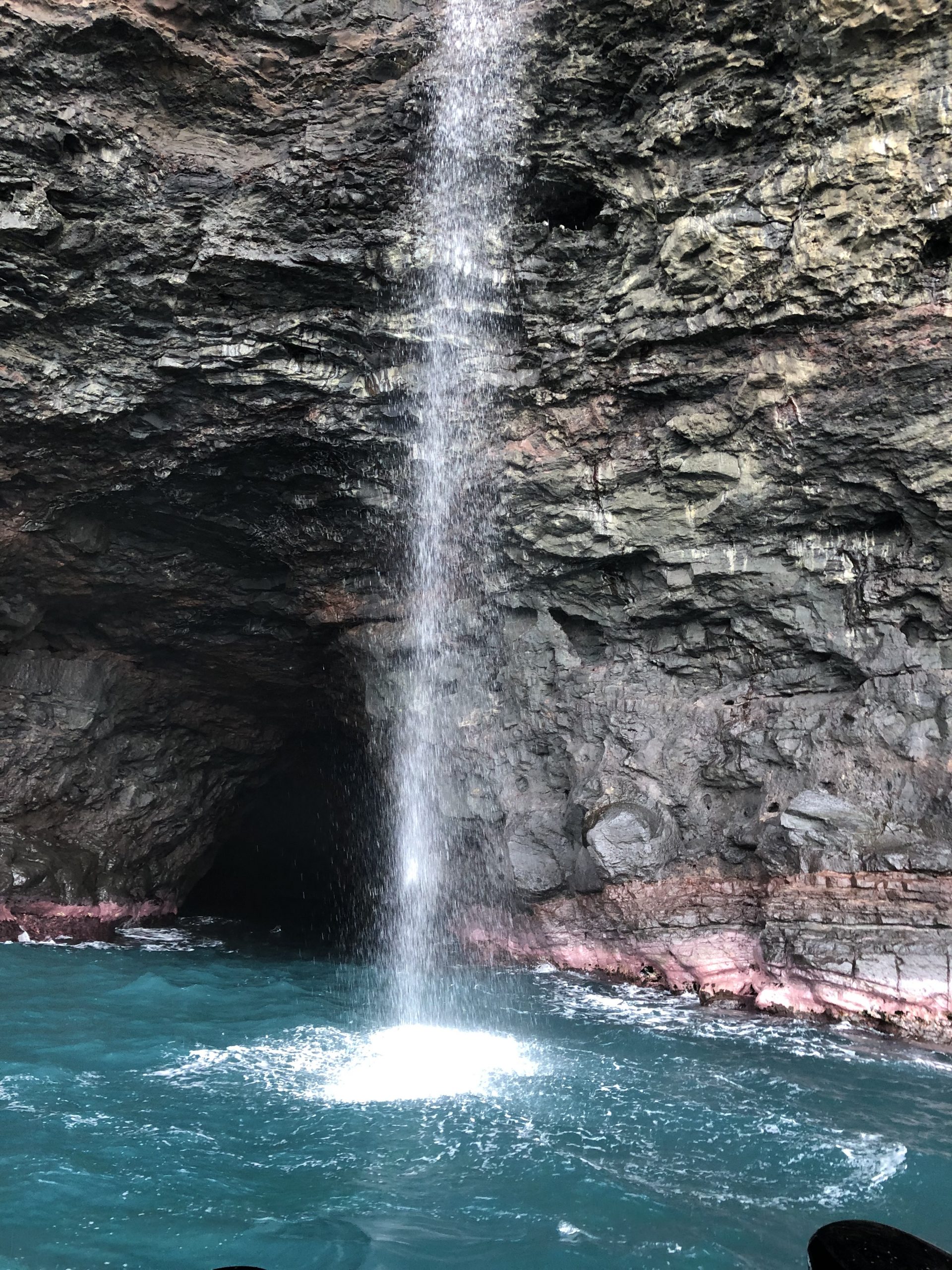 Up next, is the shoreline of the Nāpali Coast State Wilderness Park.  This section is perhaps the most well recognized and photographed terrain in Hawaii, if not the United States.

The ridgelines are as dramatic as can be experienced.  The views across the canyons and down to the shoreline are other worldly.  Linda and I soon discover, these shorelines possess stellar visual attributes as we look up to the tops of the canyons.

As we progress, Koa discusses each ridgeline, canyon, and shoreline for Miloli‘i, Nualolo, Awa’awapuhi, Honopu, Kalahü, and Kalalau.  To have this beauty readily accessible from sea or land is hard to properly quantify. 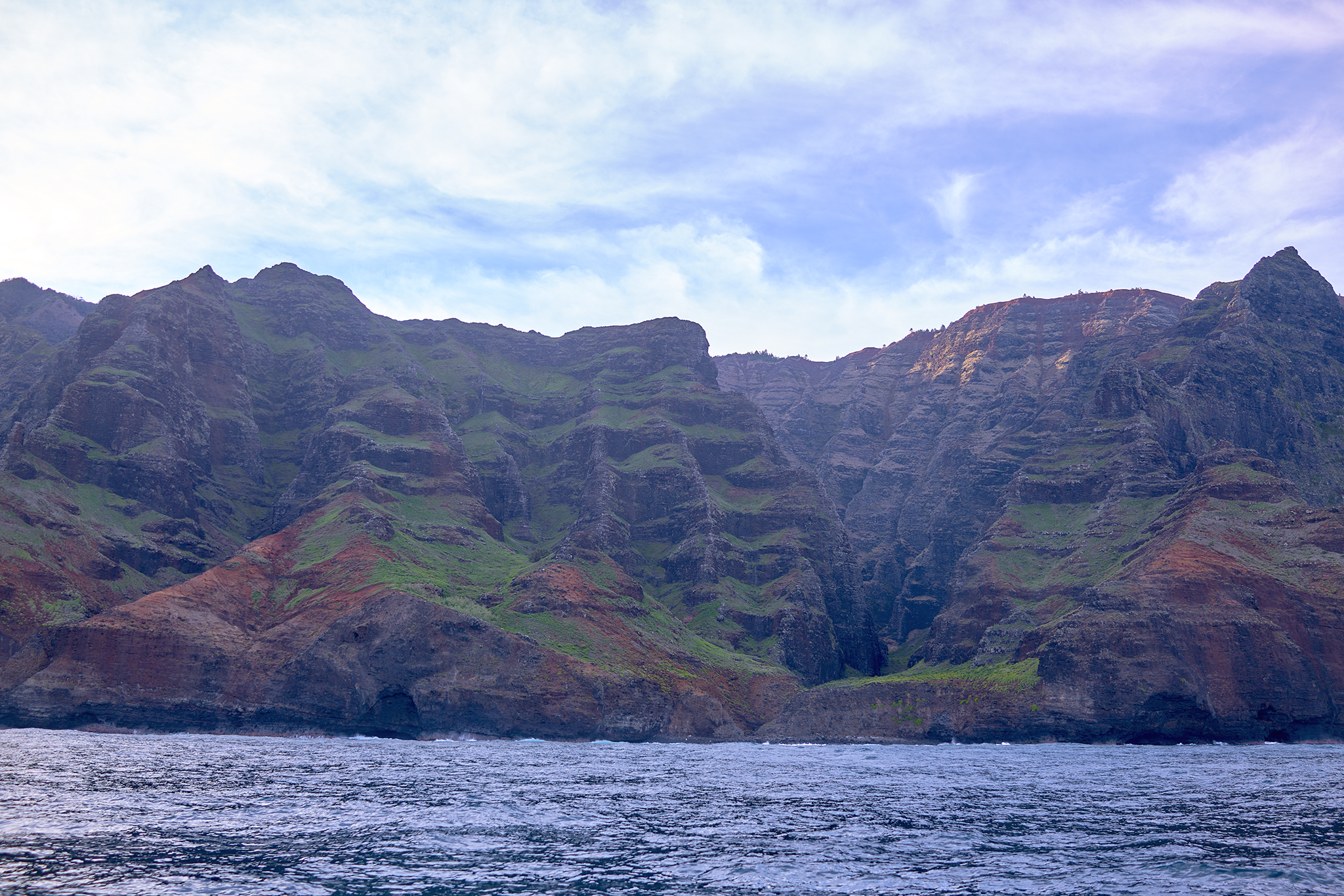 Starting at Kalalau Beach, we work our way towards Ke’ Ke’ Beach on the North Shore. Koa uses the world famous Kalalau Trail and its 11 mile length as a reference point. 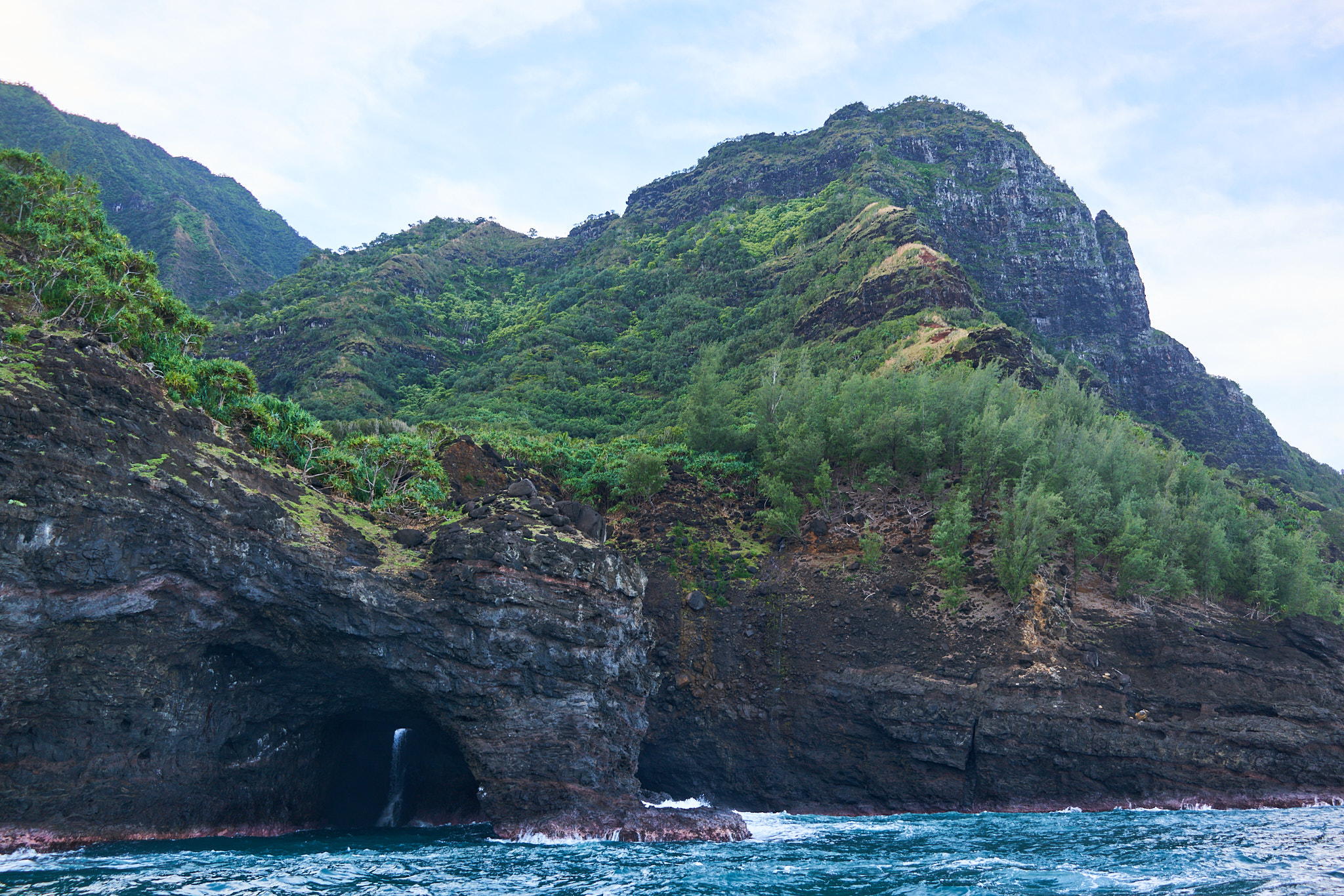 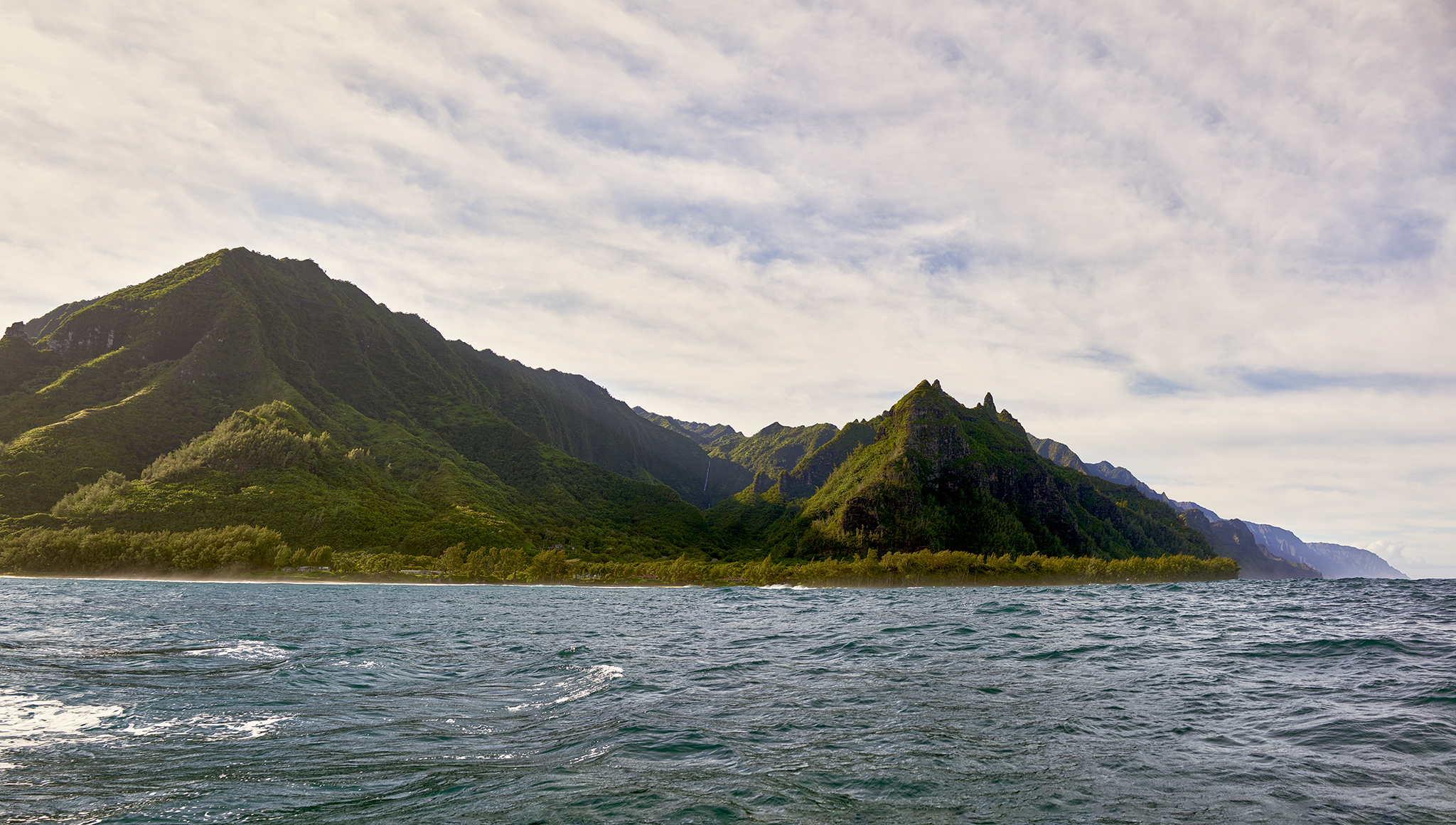 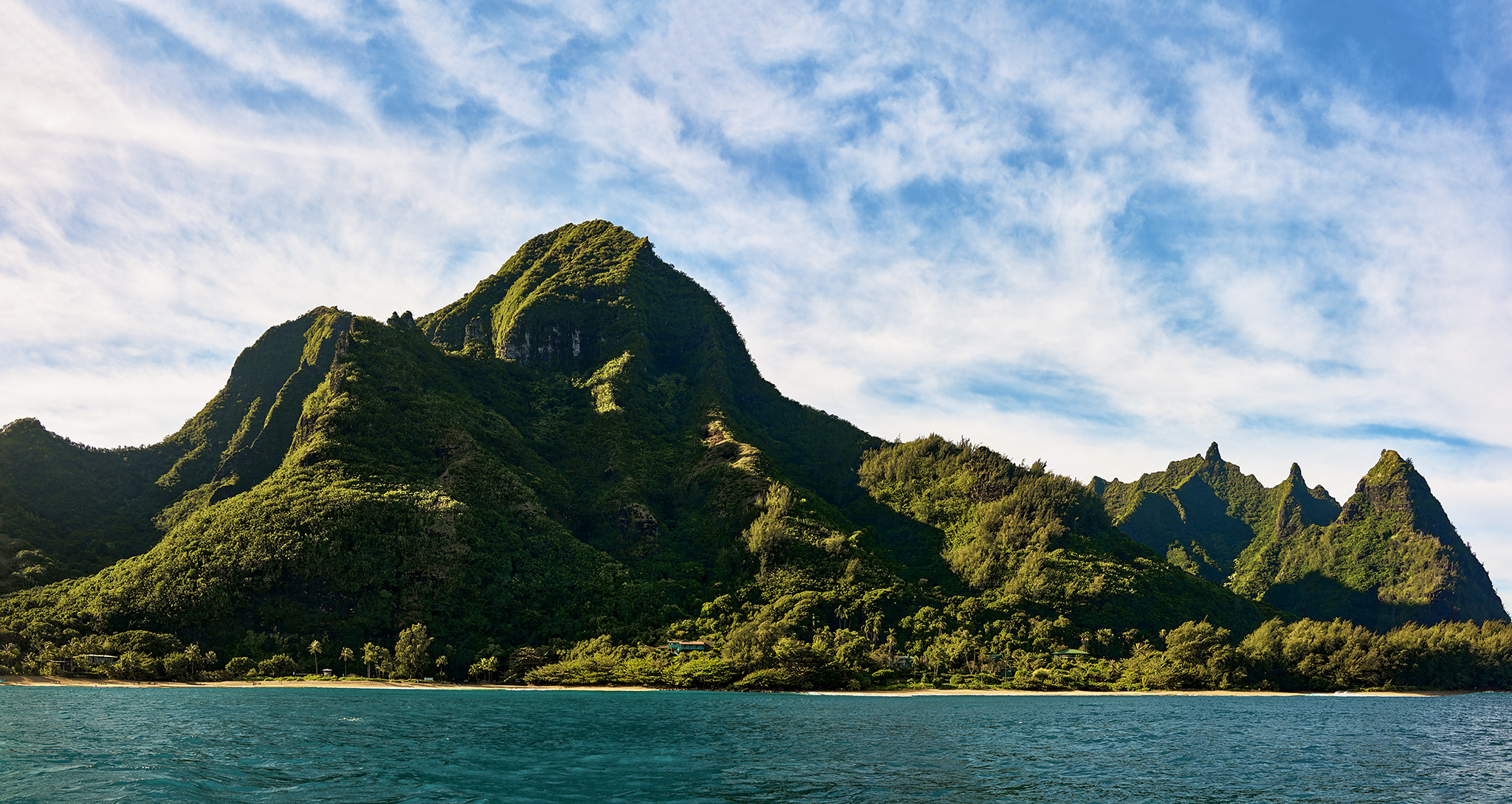 Upon arriving at Ke’ Ke’ Beach, Koa, suggests we wrap around the coastline, look for dolphins, and determine if Tunnels Beach can be reached by his boat on this trip. To reach Tunnels, Koa must guide his boat through some rougher water and sea shelves that create the huge waves at Tunnels Beach. Success! 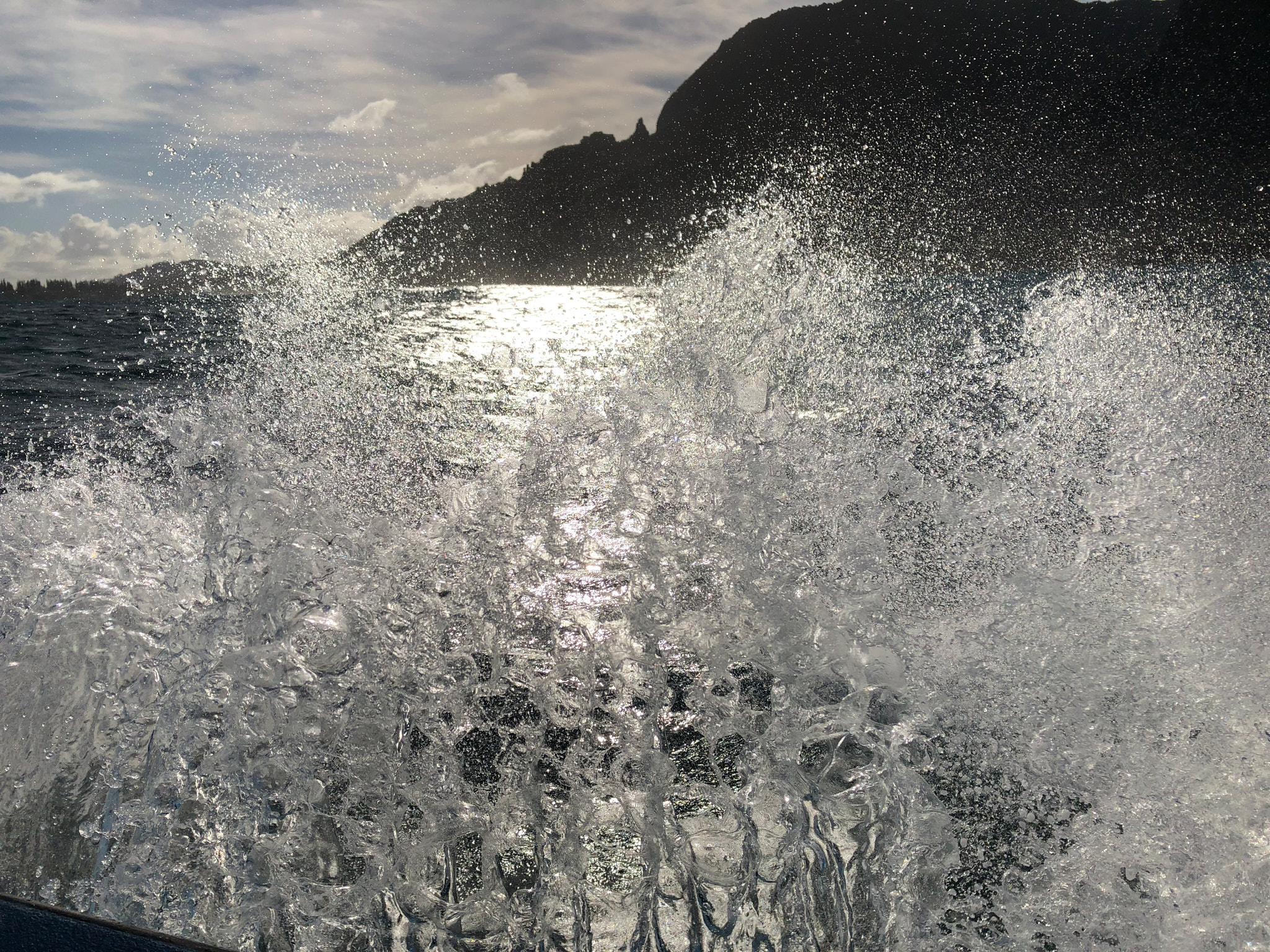 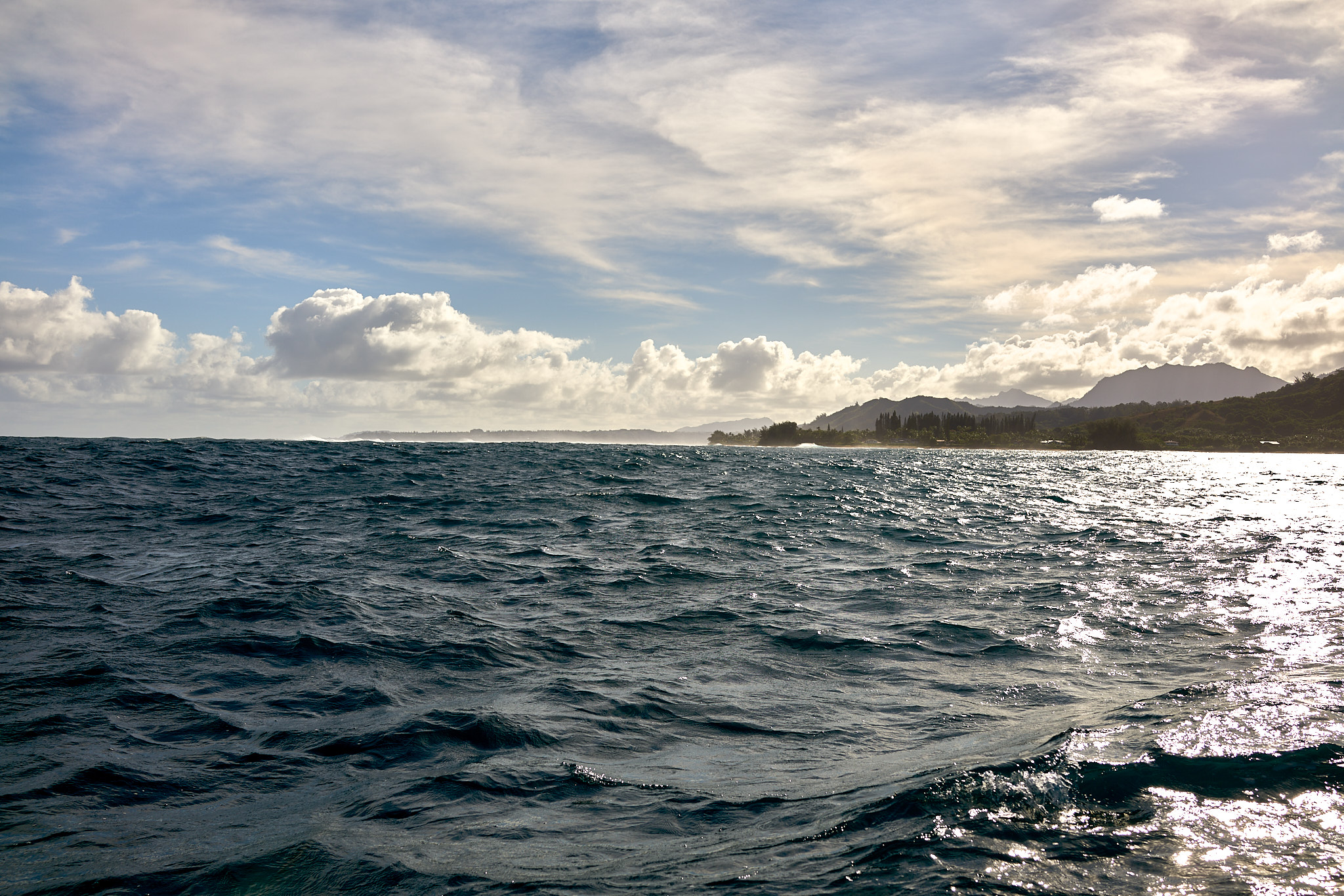 While Hanalei is a short distance away, Koa feels the water is too rough for any fun to be had and suggests we return.

For the return trip to the Kikiaola Boat Harbor, Koa suggests we move a bit farther from shore.  This move is to allow us to possibly see dolphins and whales.

Within minutes dolphins are surrounding our boat. 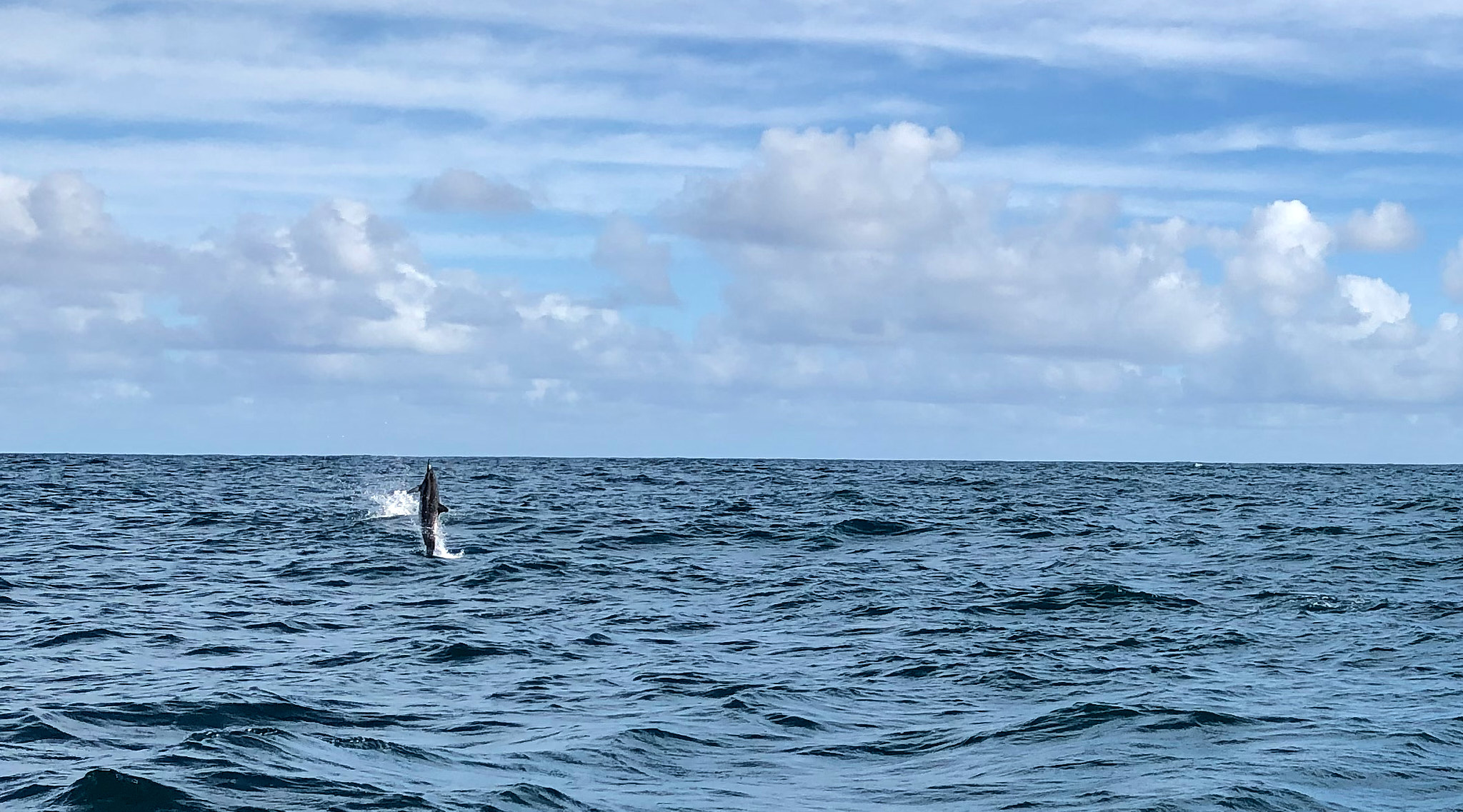 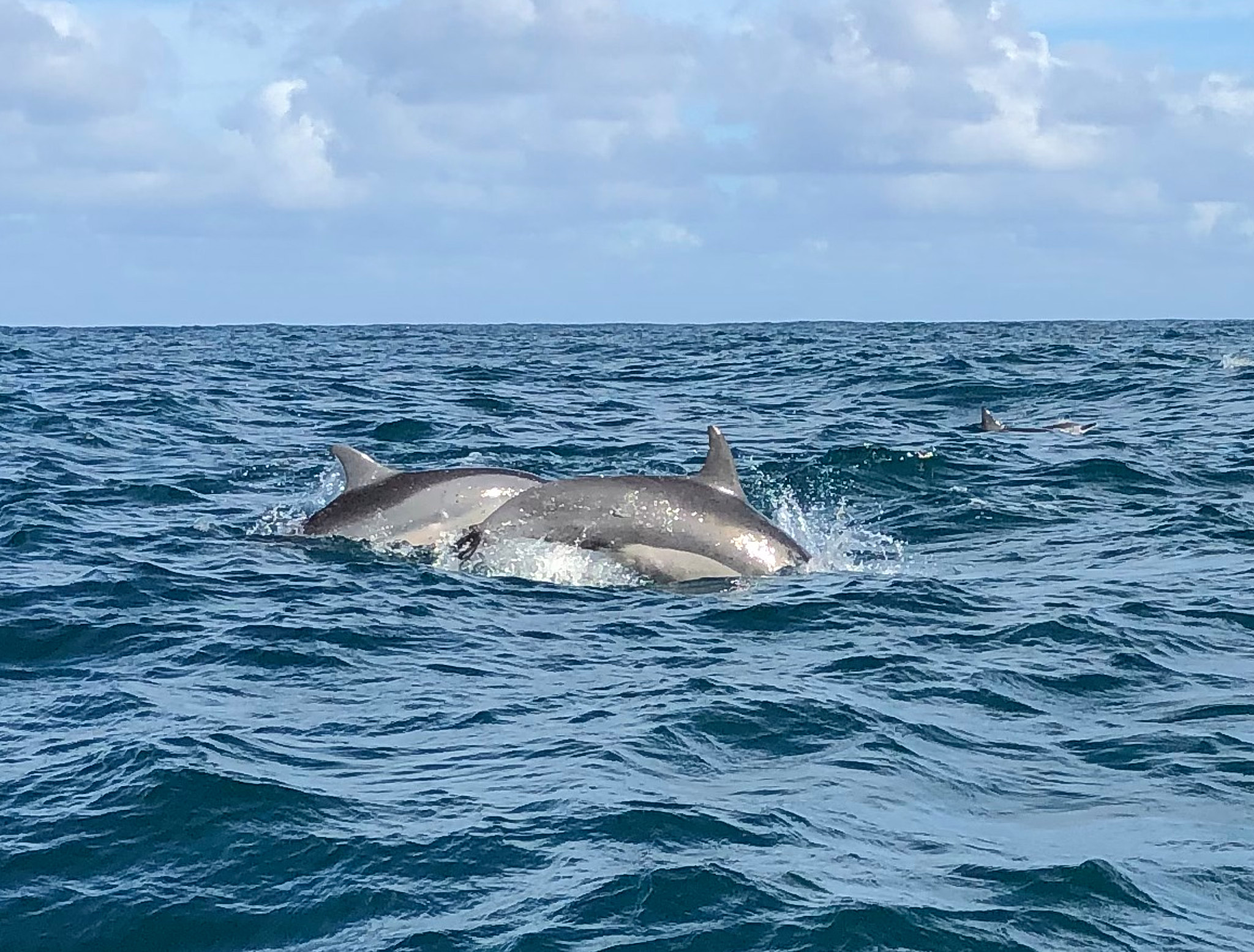 The return trip allows us to take in the coastline from a different perspective.  With the sun higher in the sky, the light reveals the deep reds and bright greens that make up the Na Pali coastline. 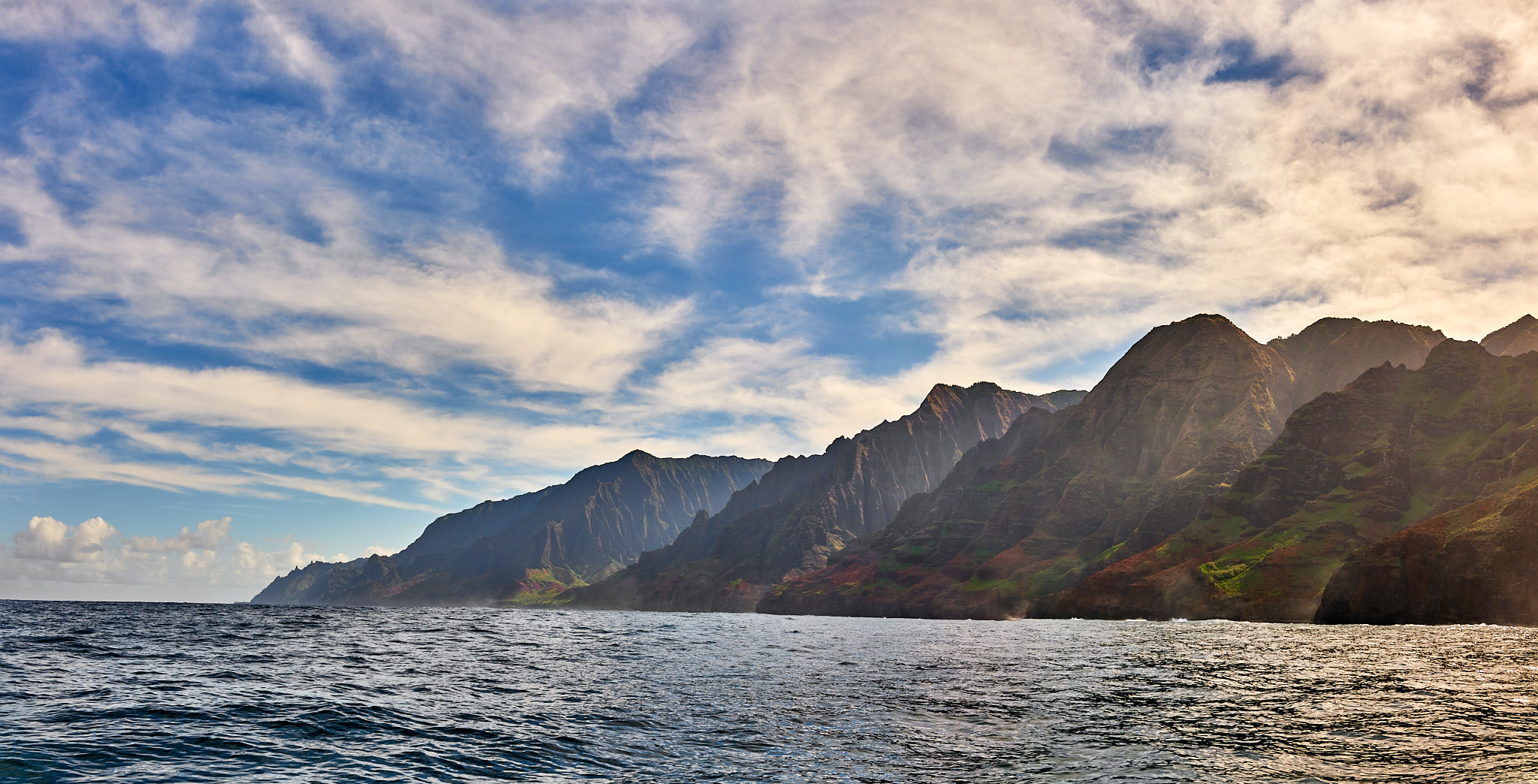 During the return, Koa notices a couple of friends out in their boat.  We stop to say hello.  Koa asks about any whale sightings.  His friends say that a couple of pods were in the water off of Barking Sands Beach.  Koa suggests we put the boat in such a position that I can look for whales between the boat and shore, Linda can look for them between the boat and Niʻihau island, and he can look for them in the open sea ahead.  Both Koa and Linda sight spouting whales.  However, the whales prove to be too far in the distance to find and further observe. 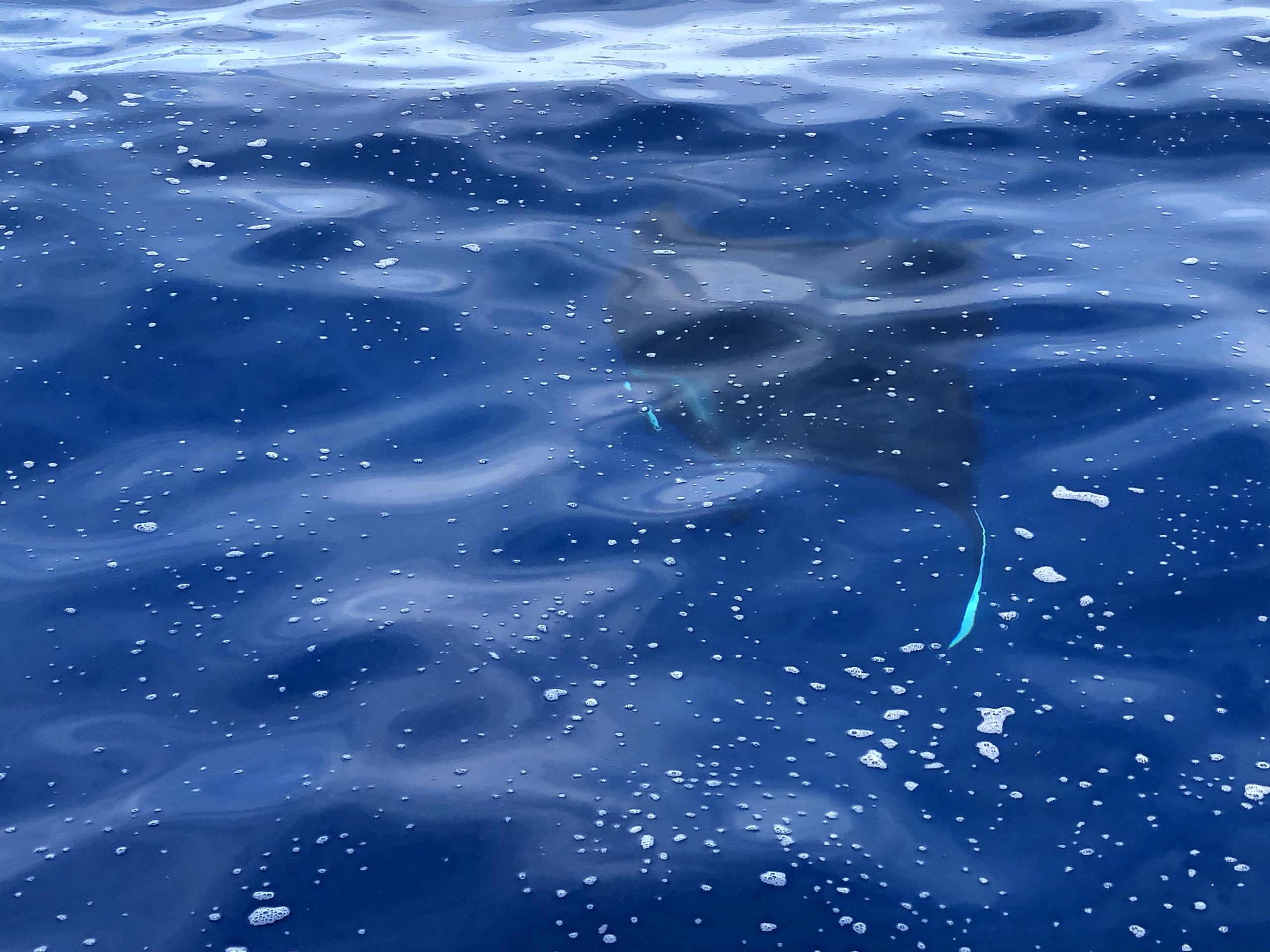 We do experience one pleasant surprise on the return trip – a school of Manta Rays.  These fish are large.  The ones we observe are 12-15 feet wide.  Manta Rays can be as large as 23 feet in size.

After five hours in the water we reach Kikiaola Boat Harbor safe and sound. After hugs, handshakes, thankyous – in English and Hawaiian, Linda and I head home.  Ironically before opening Christmas presents, Linda suggests we conduct our normal walk on the beach up to the Kikiaola Boar Harbor and back.

Koa relayed an interesting story from last year by answering a question of Linda’s.  Does anyone attempt to swim across the channel from Kauai to Niʻihau?  The answer is yes. Koa was hired to escort three people attempting to swim the channel from the two closest points – 14 miles in open ocean. The swimmers made it.  The time in the water for the swimmers – 19 hours (3AM to 11PM).

The chart map of Kauai (see below) reveals that Kauai appears to have about four distinct shelves before the water reaches 7,000 – 10,000 in depth.

The sea floor is made up of sand, mud, rock and corral.

While beachfronts are disappearing in many places, this is not the case with our house. My friend Jack follows these things closely.  Jack informed me that the beach in front of my house has increased 40 feet in depth over the past 30 years.  The distance from the mean-tide line and my property is about 57 yards and 14 feet in height. 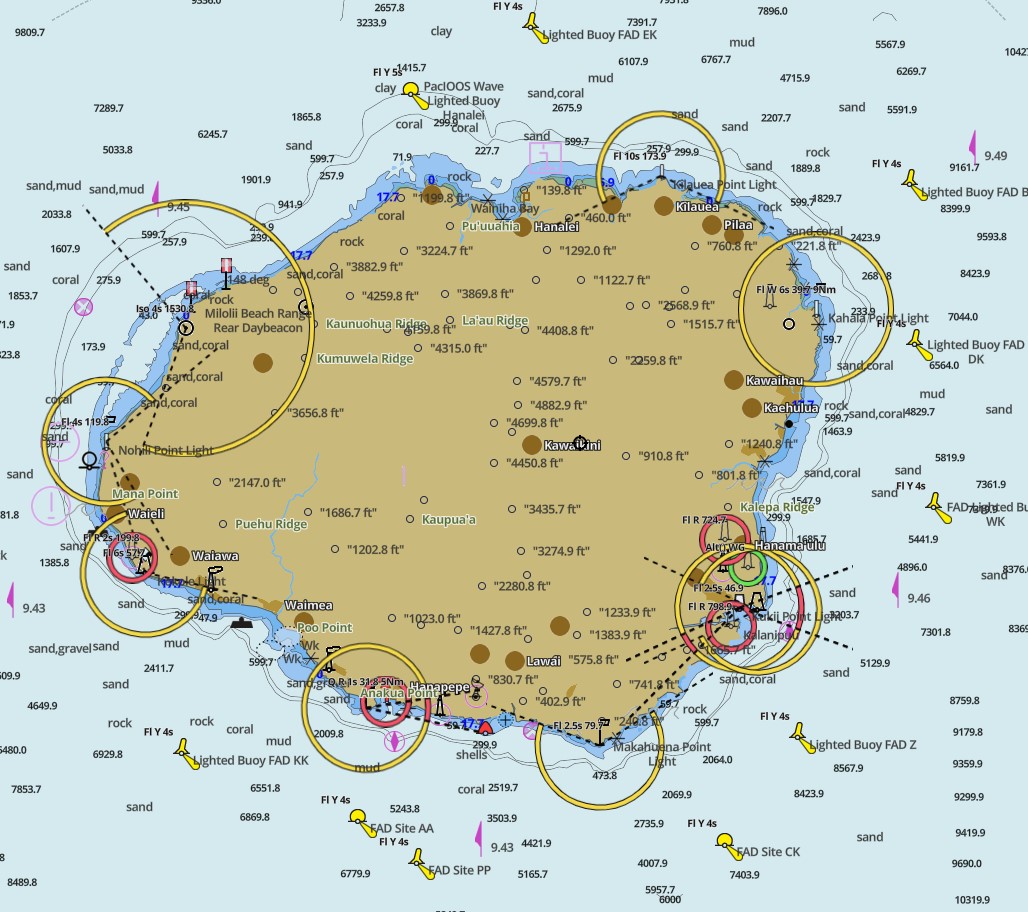