The prospect of a natural disaster is something of which the media feasts.  A weather related event that can be predicted, anticipated, tracked and analyzed - can fill an entire programming period for days on end.  Hurricanes and Typhoons used to be the only weather events named. In the 21st century all weather spectacles are now named and packaged.  If the [Place The Name Here]MAGEDDON poses even the faintest of risk to anywhere in the United States expect a plethora of  "on-the-scene" reporters outfitted to the "T" in sponsored outfits broadcasting live.  Luckily, more often than not the event ends up bringing only a small fraction of what has been predicted (e.g., a Category 5 storm turns out to be a party cloudy afternoon. 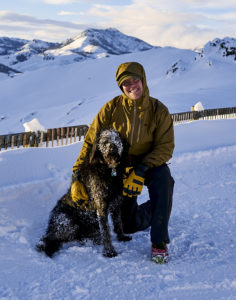 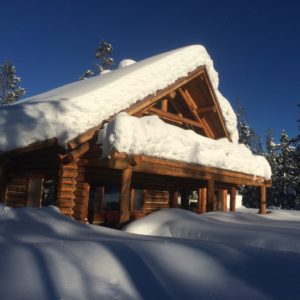 So when Snowmageddon 2017 was predicted in January in my region, I treated the upcoming event with a bit of skepticism. The official National Weather Service forecast predicted up to 40+ inches of the white stuff (even more at the highest elevations) over a three-to-five day period. It should be noted that we who live in the high mountain's of Idaho we welcome as much moisture as can be delivered - especially if it is snow.

Well... this time the prediction was spot on correct - Snowmageddon 2017 was a dandy.  The National Weather Service (correctly) warned the snowfall might be so great that road-crews and snow plows would not be able to keep pace. Luckily, in my area, the infrastructure is in place to deal with the issue.  And, at least in the Wood River and Sawtooth Valley's, the Idaho Transportation department was more than equal to the task.

As the event ended and the clouds started to clear (Thursday 1/12/2017) Kyle, Merry [Christmas] dog, and I put on the crampons  and climb up to the top of Dollar Mountain after work.  We took in a wonderful sunset behind Baldy.

On Friday I head up to the cabin in Stanley to clear the 36-40 inches of new snow that had arrived.  Linda, Shae dog, and Merry [Christmas] dog join me on Saturday mid-day for the MLK extended-weekend.  It is winter wonder land. I should not forget to mention that the temperatures on Friday (-31 F) and Saturday (-31 F) were pretty chilly.