The Monarch Butterfly is a remarkable creature. The Monarch is the only insect that migrates like birds. The U.S. Fish and Wildlife Service put the Monarch Butterflies on the waiting list for a Endangered Species Act listing.  The reason being its populations have shrunk drastically. The Western Monarch has seen a loss of 96% of its population and the Eastern Monarch 80% since the beginning of the 21st century. 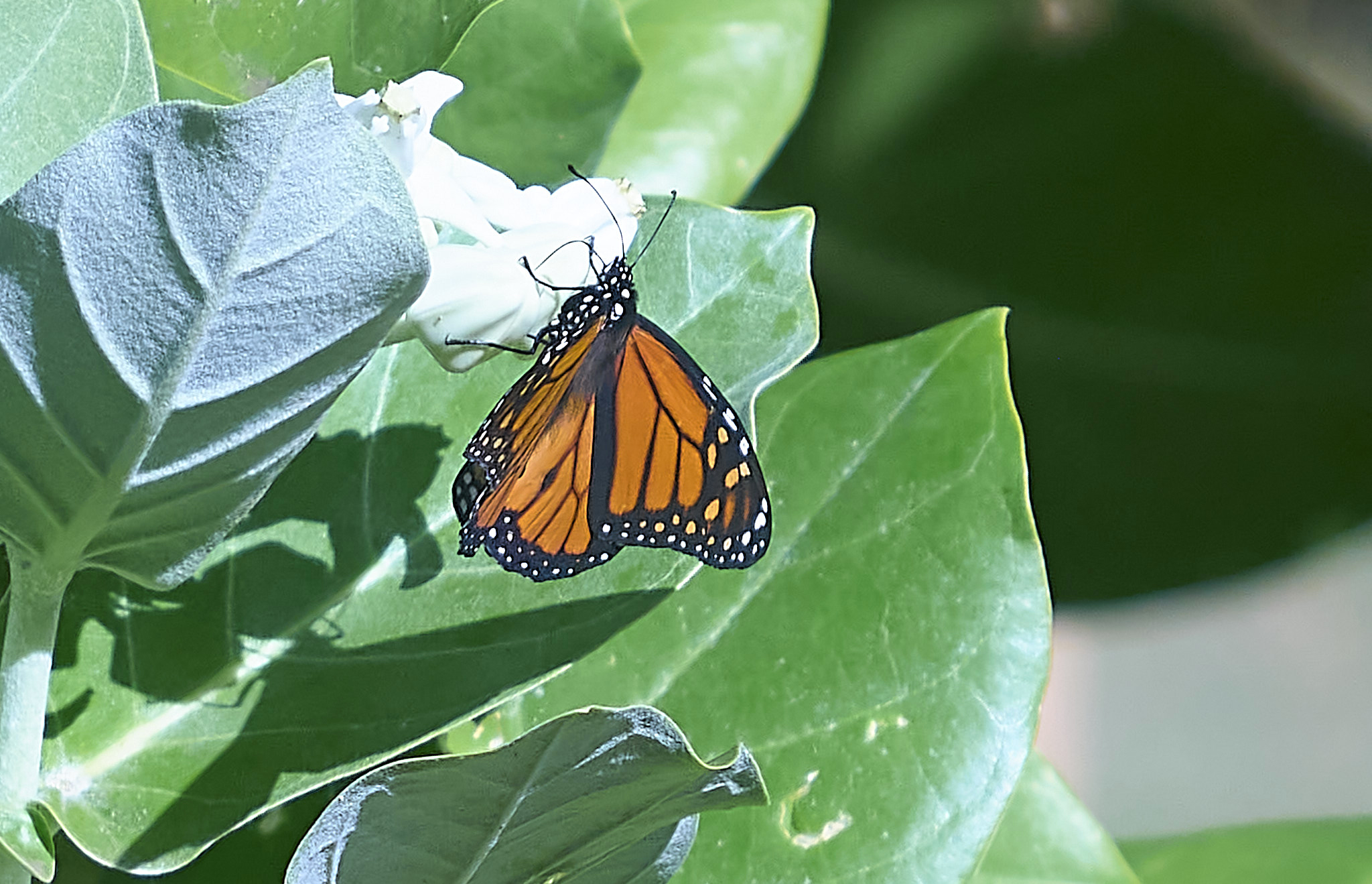 Monarch Butterflies seem to like the Crown Flower. There is a huge Crown Flower bush in our neighbor’s yard (Wyatt Hurd) next to our house.  The bush has been wonderfully maintained by Wyatt. The bush was in bad condition when Wyatt moved in in July. The Monarch’s float and zip in and around our yard throughout the day.  Man they are fast.

However, better to be lucky than good, I was able to capture the images on this post. 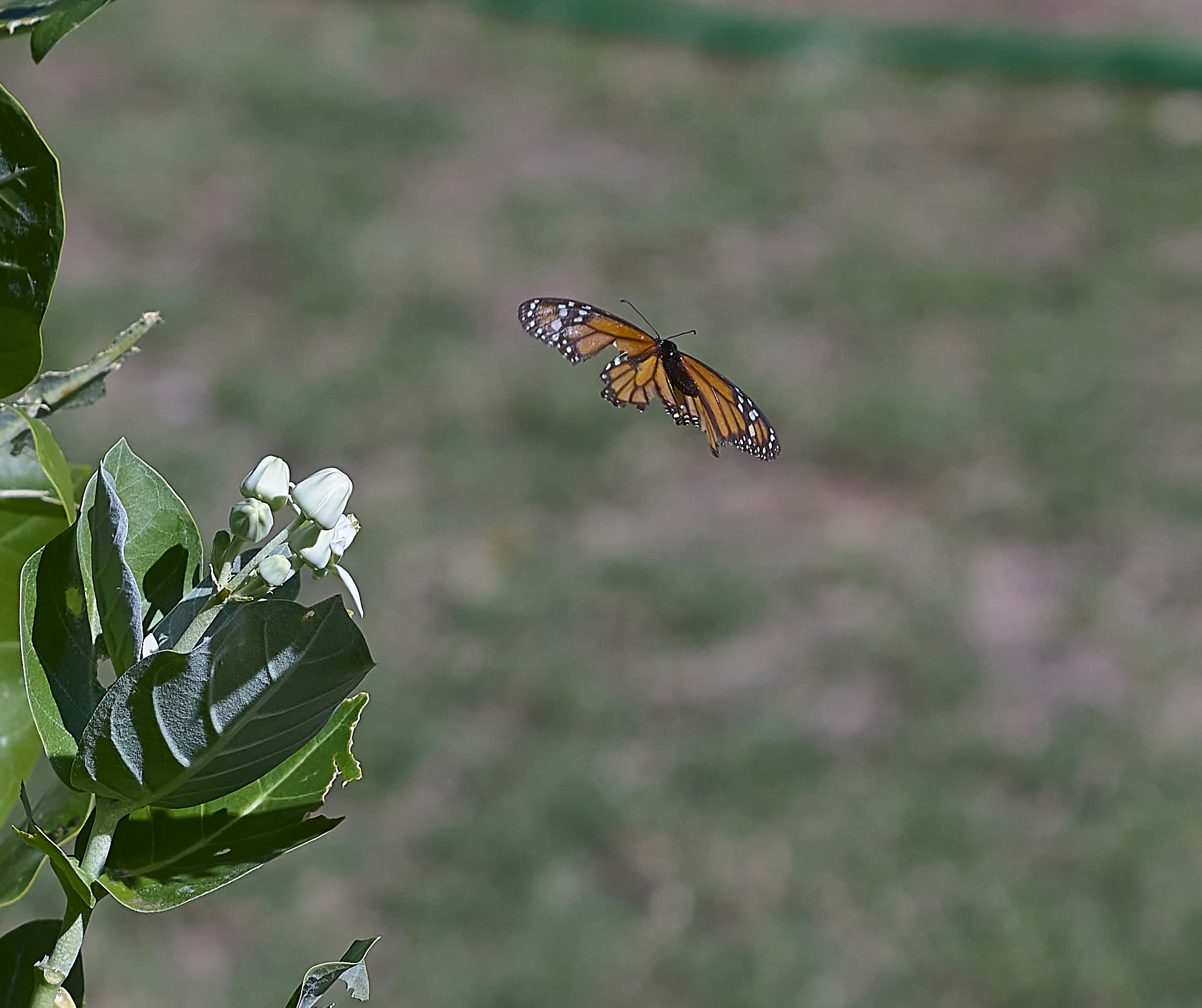 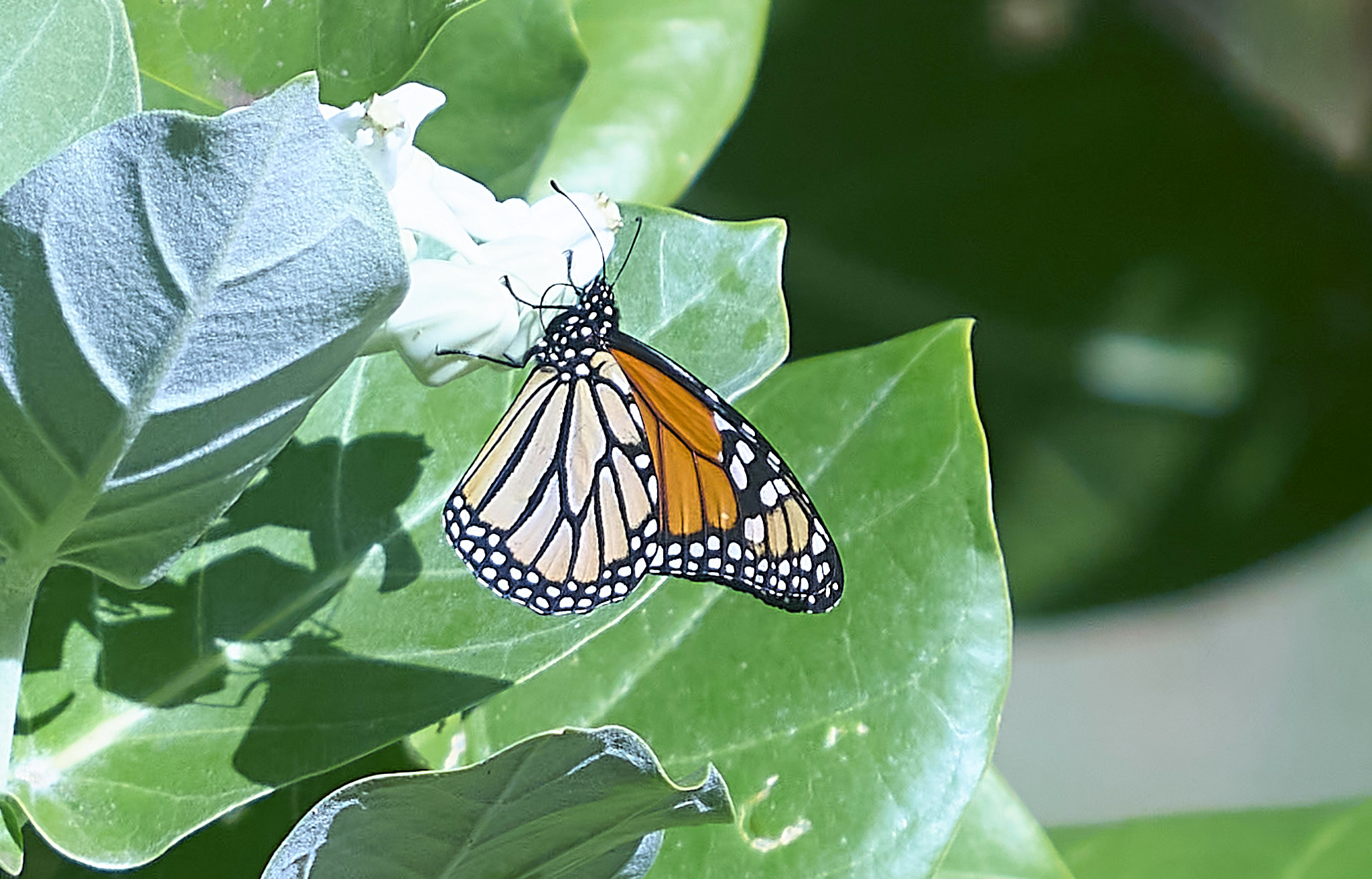 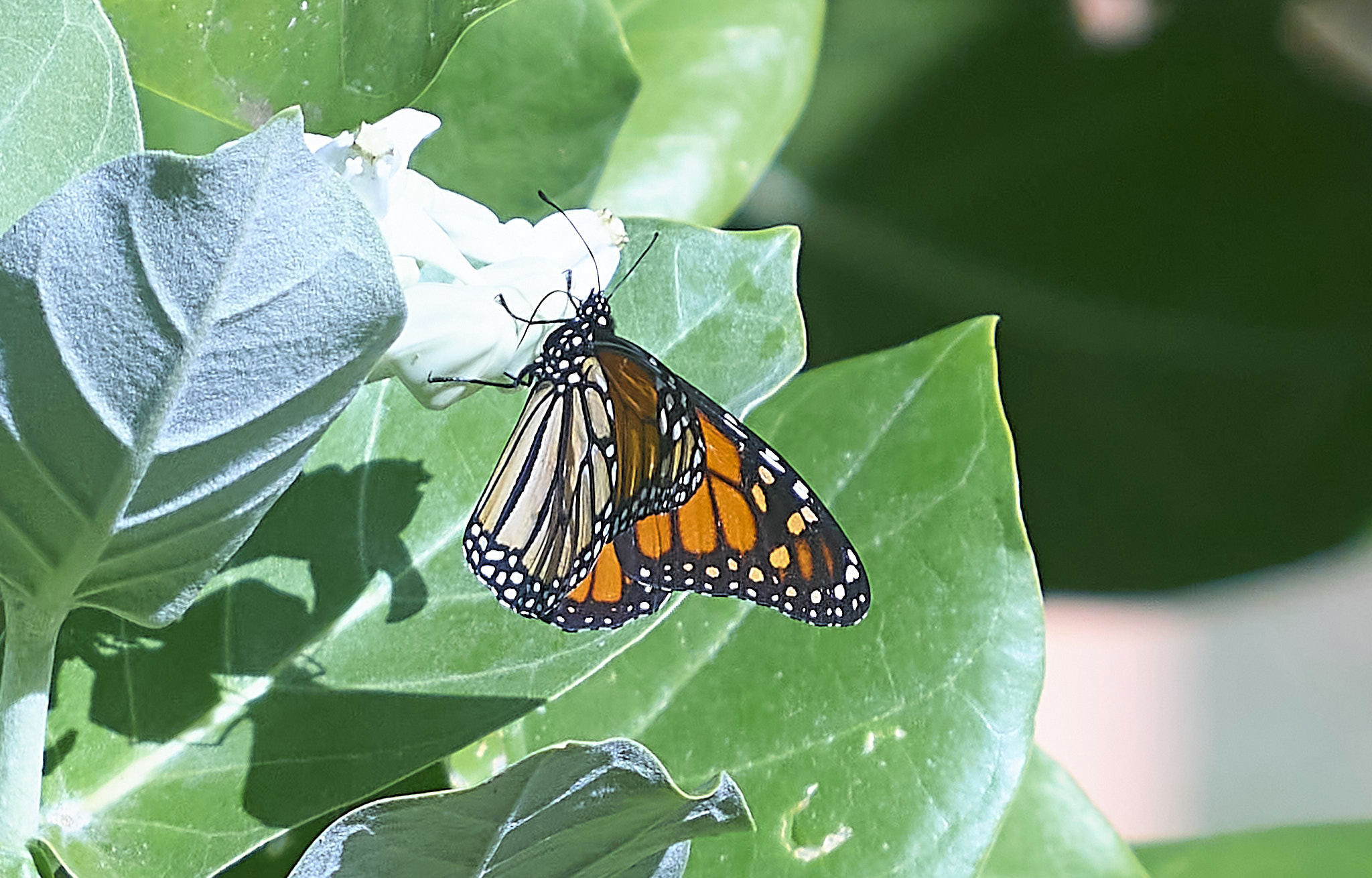 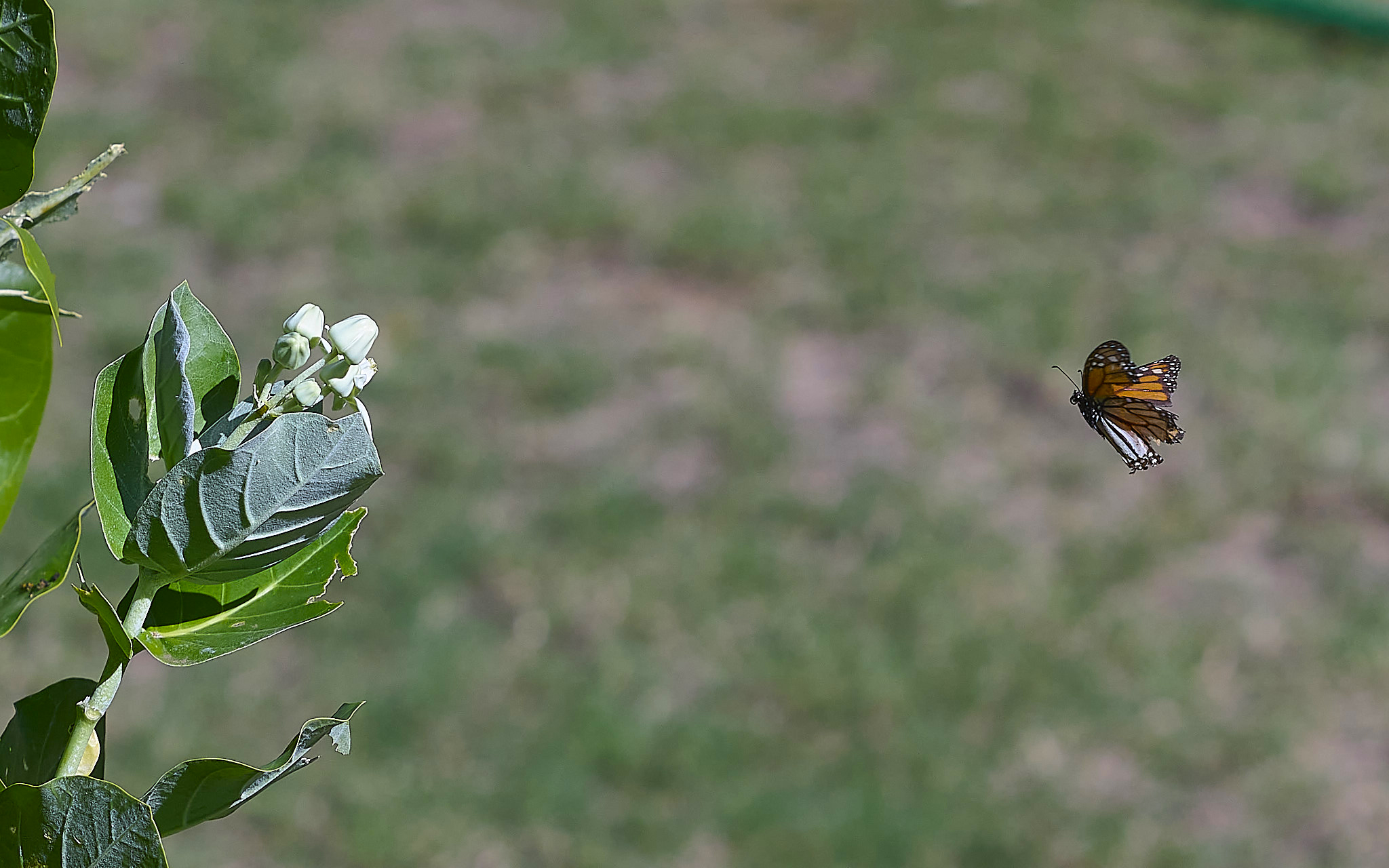 The Crown Flower is perhaps best known to US mainlander’s as the flower in the Hawaiian leis.  However, the flower can be a problem.  Here is what Kauai Seascapes says, “This sweet little plant is often strung into lei or planted as part of a pollinator garden. However harmless it may seem, it can be a royal pain if the sticky white sap gets anywhere on your skin or in your eyes. The milky juice will irritate and burn your skin and cause the eyelids to get red and swollen. If ingested it will cause stomach cramping, nausea, vomiting, an irregular and slowed pulse, dizziness, headache, and confusion.”

The images on this post represent my very first serious attempt to photograph butterflies.  Because of their speed and almost instantaneous redirection moves I had the shutter speed set to 1/4000 of a second.  I captured the images with my PHASEONE gear IQ4 XF 240MM lens at an average of 50-75 feet away in distance.  My Nikon D850 captures images up to 7 frames per second.  The PHASEONE .6 frames per second.  Yes, the difference is huge. Seeing I am shooting HAND HELD, I better be good with the shot, as it will likely be my only one – or at least while the Monarch is flying – for a while until I reset my bearings. I captured 28 images. The PHASEONE was remarkably accurate.