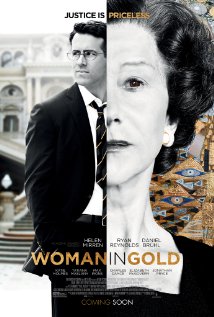 The film Woman in Gold presents a remarkable story.  When the elements of human spirit are the focus – the script, cinematography and acting by the principles produce a noteworthy and highly enjoyable film.  When the plot lines of procedural drama or the ‘Bad Guys’ are the focus; Woman in Gold is a bit the lesser, only because the product lacks the same personal touch offered in the rest of the film.

Woman in Gold presents a story that is true and remarkably accurate to the life of Maria Altmann.  Her story is replete with childhood wonder, love, wealth and privilege.  Maria’s story also includes she and her family being subject to discrimination and sheer terror by the worst humankind and its institutions can offer.

Woman in Gold stars Helen Mirren (The Queen), Ryan Reynolds (The Proposal) and Tatiana Maslany (Orphan Black).  Mirren and Maslany shine in their roles.  Reynolds is very good, especially when opposite Mirren.  The talented and versatile Daniel Bruhl (A Most Wanted Man, Rush, Inglorious Bastards) is underused in an underwritten role.  Katie Holmes (Thank you For Smoking) feels completely miscast as the wife of Randol Schoenberg (Ryan Reynolds) in a role that is best characterized as a throwaway.

Antje Traue (Man of Steel) as Adele (aka The Woman in Gold) is absolutely stunning.  Her lines are small in number, but terrifically important to the life of Maria and are germane to another highly interesting story only inferred in the film.