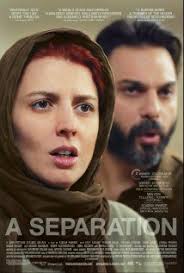 Can all involved in a disagreement be both correct and incorrect, right and wrong, and honest and dishonest at the same time? A Separation written and directed by Asghar Faradhi presents this concept to the viewing audience (and much more) with an astonishing level of nuance that only the very best of films provide. A Separation is the the 2012 Academy Award Winner for Best Foreign Film.

Set in present day Tehran, Iran A Separation looks into how principle, custom, law and commitment come into conflict with everyday people who mean well but ultimately are flawed in the eyes of others.  The narrative and acting are nothing short of superb and the storyline and setting may be an surprsing eye-opener to audiences from the U.S.

The intrigue and suspense A Separation provides is the 21st century equivalent of Hitchcock’s Stranger on a Train or Rear Window.